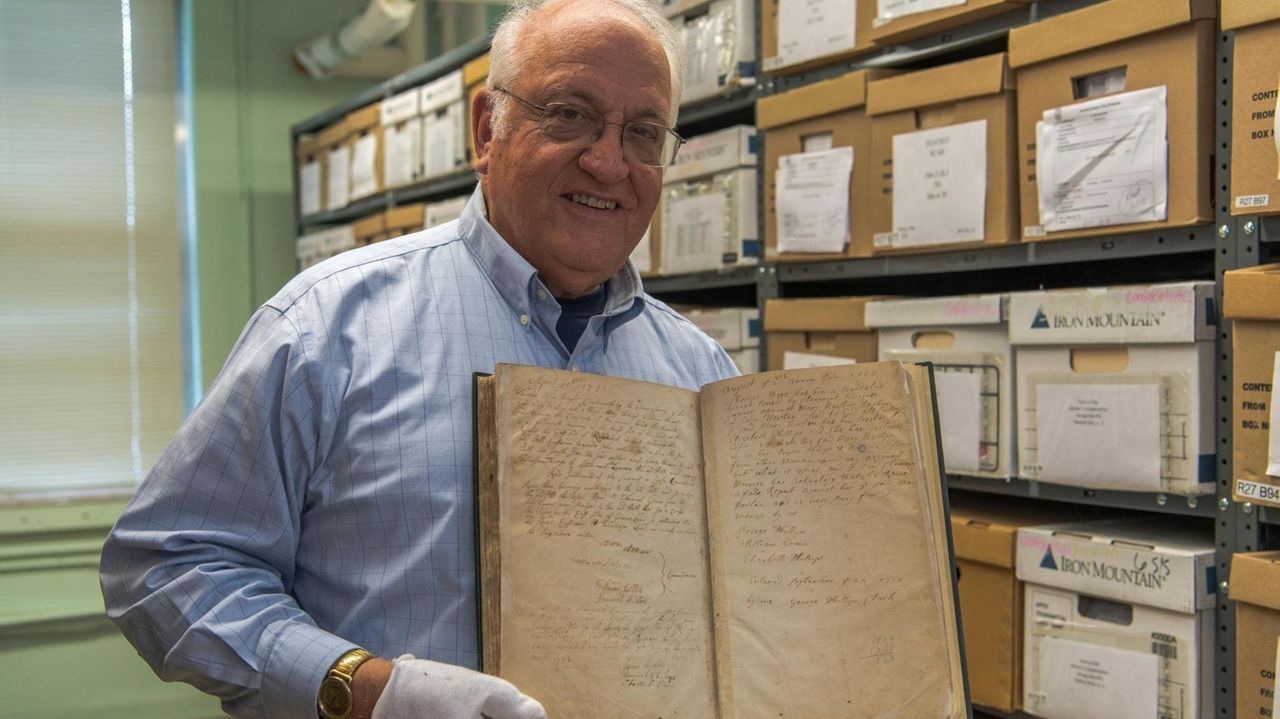 Islip Town historian George Munkenbeck said he found evidence that a local woman was accused of witchcraft in 1737 and discussed his findings from his office on Monday. Credit: Newsday / Rachelle Blidner

A discovery made just before Halloween has enchanted the Islip historian’s office: A local woman was accused of witchcraft nearly 300 years ago — a part of town history that has lived in the shadows until now, the historian said.

Town historian George Munkenbeck said his team was going through the original town board meeting minutes book two weeks ago as research for an upcoming anniversary celebration when he read a “Scandalus Report.”

The entry for Aug. 2, 1737, shows that a woman named Mary Newton was accused of something “scandalus,” searched and found to be in “proper shape,” with nothing unusual compared with other women. Her accuser, Clemment Morrise Junior, then admitted he made a false report against Newton and apologized.

Munkenbeck said he’d read the entry before but realized only then that it must be about a witchcraft accusation, given the time period and that the entry is “hidden” in the back of the book after several blank pages.

“They were squashing something, and it’s rather obvious it was something serious,” Munkenbeck, 73, said.

According to his interpretation, a committee was formed to investigate the allegation. Newton was searched for a “deformity” that was believed to be a sign of a devil’s servant, such as unusual moles or a “witch’s teat,” a piece of flesh hanging near the genitals, he said.

The accusation would have come 45 years after the witch trials in Salem, Massachusetts, when 19 people were hanged for alleged witchcraft.

Yet witchcraft accusations “did linger through the early 18th century, and Long Island is not an unlikely place for them,” said Elizabeth Reis, a professor of gender and bioethics at the Macaulay Honors College at the City University of New York.

Two witchcraft trials were recorded on Long Island decades earlier. Goody Garlick was accused in East Hampton in 1657 of witchcraft following the death of Elizabeth Gardiner Howell. She endured three weeks of hearings in East Hampton and was later acquitted in a trial in Hartford, Connecticut. Setauket couple Ralph and Mary Hall were tried in 1665 in the Court of Assizes in New York and cleared of witchcraft charges after the deaths of a father and son.

In the Islip case, historians may need a bit of magic to unravel the mystery of the accusation against Newton: There is no other information about the incident.

Reis, the author of “Damned Women: Sinners and Witches in Puritan New England,” said she agrees with Munkenbeck’s interpretation, especially given the “caution and restraint” shown by magistrates after “the embarrassment of Salem.” She said it’s possible there is another explanation.

Mary Beth Norton, a Cornell University professor of American history, said Munkenbeck’s theory is “barely possible” because 1737 is “very late for a witchcraft accusation.” It is more likely Newton was accused of being pregnant while unmarried, said Norton, who is president of the American Historical Association and the author of “In the Devil’s Snare: The Salem Witchcraft Crisis of 1692.”

Munkenbeck said that he believes a pregnancy would have been handled by the family instead and noted that academics frequently debate what historical documents mean. He said that without more information, he will never be able to prove his bewitching theory.

“The story in this entry tells us the who, what, how, where and when, but perhaps we will never know the why,” he said.

Whereas there has bin a Scandalus Report Raised by Clemment Morrise Junior against Mary Newton Dagter of John Newton:  and to End all Conteryvesy ye said Mary Newton has been Serched by Elizabeth Phillips and She has Declared before us that the said Mary Newton is in her Proper Shape & nothing Deferent from other Women upon any account but what is usial and ye said Clement Morrise has Acknowledge that He Raised a fals Report against her ye said Mary Newton and is very sorry for it.

By me George Phillips.  Clark