Jake's 58 Hotel and Casino, Long Island's first video lottery casino, opened in Islandia on Monday, Feb. 27, 2017. The casino has only 265 video lottery terminals, but 34 machines will be added in March, and a total of 1,000 will be at the site by summer, casino officials said. Credit: Barry Sloan

OTB officials are hoping to hit their own jackpot with the betting parlor, which they say will help bring the struggling agency out of bankruptcy.

The casino’s first 265 video lottery terminals opened at 1 p.m., just hours after the state Gaming Commission issued a certificate allowing the facility to open at Jake’s 58 Hotel & Casino, on the north service road of the Long Island Expressway. Dozens of casino customers already had lined up in the hotel a half-hour before the betting parlor opened.

Suffolk County Regional Off-Track Betting Corp. officials have said they expect the casino to generate about $164.25 million in profits each year — enough to help wipe out about $15 million in debt, create 250 jobs and save another 250 jobs. 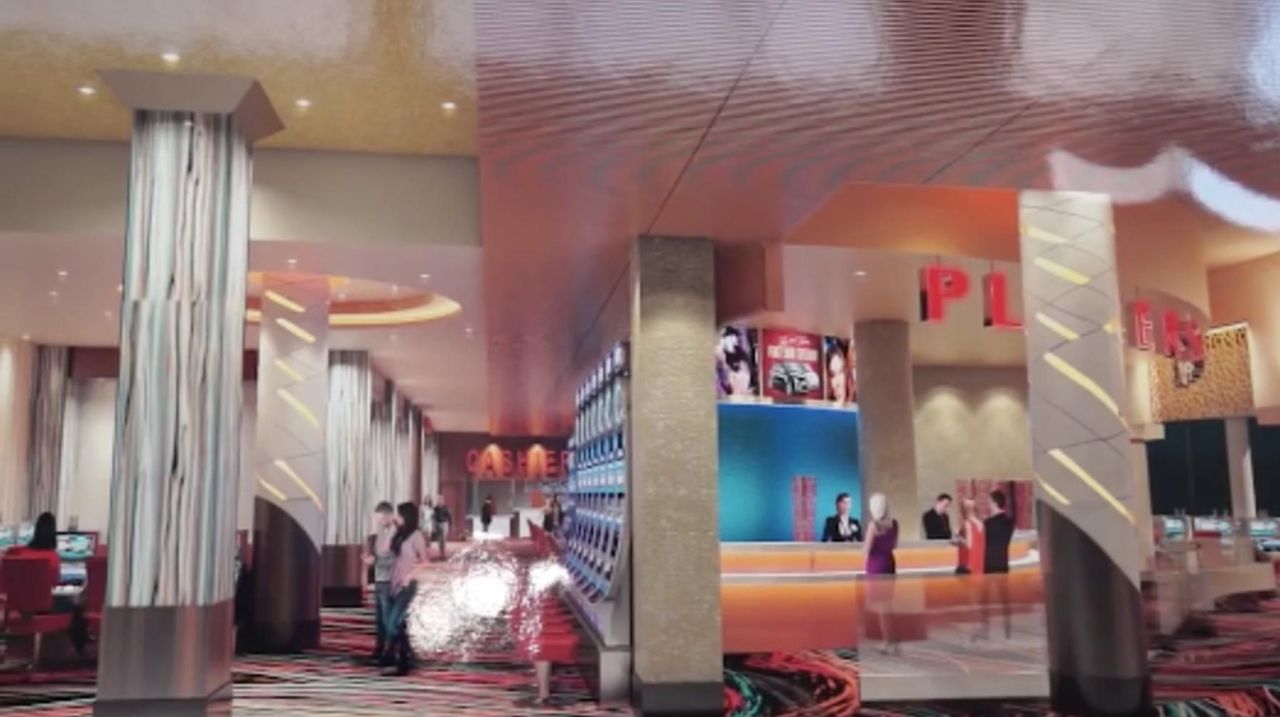 “It’s a great day,” Suffolk OTB vice president Tony Pancella said, minutes before the opening. “It’s important for the county . . . because of the jobs we created and the jobs we saved.”

Jake’s 58 general manager Chuck Kilroy called Monday’s opening a “soft launch” because there were only 265 video lottery terminals. He said 34 machines will be added next month, and a total of 1,000 will be at the site by summer.

The hotel, formerly the Islandia Marriott Long Island, was bought last year by Buffalo-based Delaware North, which works under contract to Suffolk OTB to operate the casino.

Opponents of the casino, including some Islandia residents, have filed suit to have it closed. They argue casinos are not allowed by the Village of Islandia code, and the Village Board approved the casino last year without a written resolution or traffic studies.

Village officials have called the lawsuit a “scare tactic.”

Customers played games with names such as Sphinx, ZZ Top and Shadow of the Panther, while rock and pop music played over loudspeakers. Waiters and waitresses brought food and drinks to patrons so they would not have to leave the terminals.

Several customers said they learned of the casino’s opening by word of mouth, or because they had asked hotel employees last week when it might open.

Michael Kennedy, 26, one of the first bettors, said the Islandia casino was a 10-minute drive from his Stony Brook home — and more convenient than driving six hours to his favorite casino, Turning Stone, in upstate Verona.

“I can come when I have a little change,” Kennedy, an artist, said. “It’s pretty cool to have it nearby.”

Mary Orefice of Bohemia came with her husband, Louis, 77, and other relatives.

“It’s OK. So far, so good. I’m winning,” said Mary Orefice, who would not give her age. She said having a casino 10 minutes from her home was “dangerous.”

“You don’t want to lose all your money gambling,” she said.

Mayor will oppose VLT expansion at casinoThe Islandia village mayor told an audience at Tuesday's board meeting that he will not ... Suffolk OTB gambles on Islandia casinoSuffolk County OTB executives say Long Island's first video lottery casino is the agency's last-ditch effort to emerge from bankruptcy and save itself — if the Islandia betting parlor can meet projected revenues. Islandia VLT casino to hold 1,000 slotsSuffolk County's Off-Track Betting casino in Islandia will sprawl across 40,000 square feet of space ...

Port Jefferson Station housing gives former Marine a home, chance at 'serenity'
1:45
Northwell says it has fired workers who refused the vaccine
FBI leading 'scaled-back' search for Brian Laundrie
What happened to Gabby Petito? Key developments in the case
LI has second-highest COVID-19 rate for students, staff, data shows
3:52
Gabby Petito's father: 'Her nature was always to smile'
Didn’t find what you were looking for?