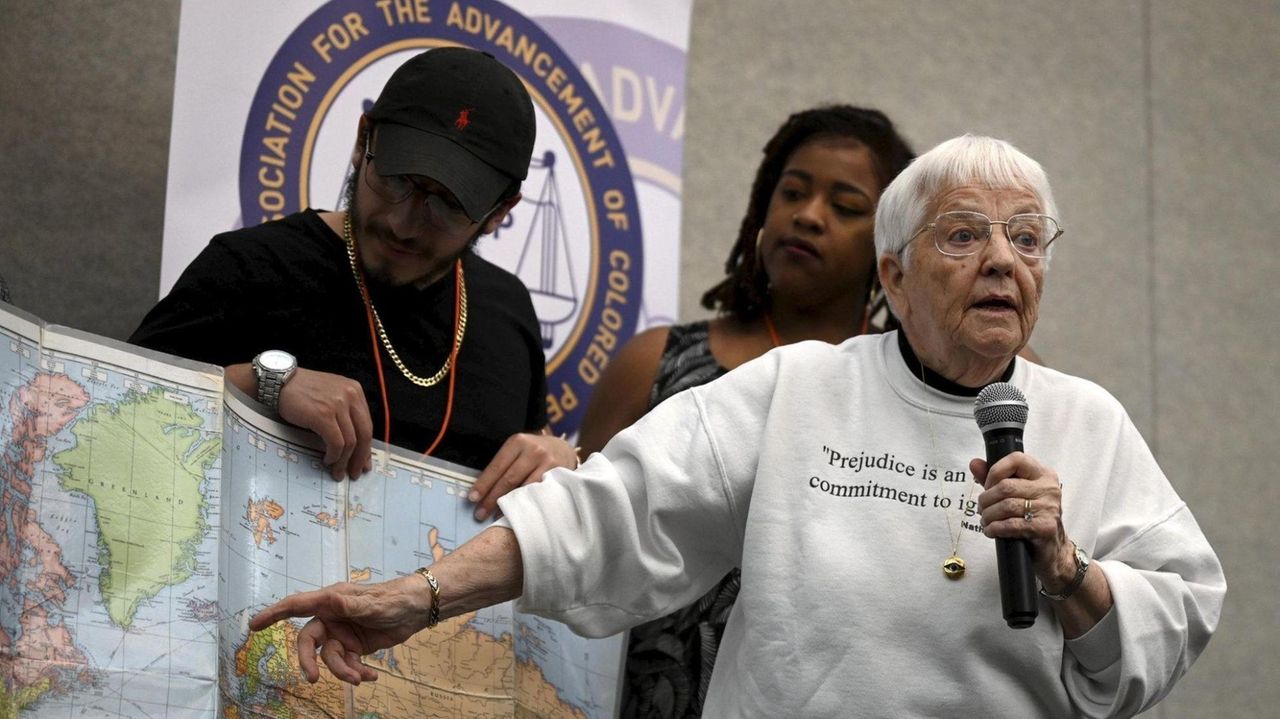 Jane Elliott, a former teacher who gained fame after a 1968 anti-racism exercise dividing her third-grade Iowa classroom by eye color, urged Long Islanders Saturday to fight racist ideology, challenge textbooks that teach false or incomplete history, and emphasize the common African ancestry of all human beings that makes us “members of the same race — the human race.”

“Human beings created racism,” she said. “Anything you create you can destroy. We can destroy racism.”

Elliott said she created the eye color lesson after she was devastated by the April 4, 1968, assassination of the Rev. Martin Luther King Jr. She divided her Riceville, Iowa, classroom into groups of brown-eyed and blue-eyed children, demeaning kids of the disfavored eye color and touting the superiority of the other color.

The exercise is immortalized in television documentaries — one of which she showed the audience Saturday of about 250 gathered in a Melville hotel ballroom — and social psychology textbooks.

The Islip Town branch of the NAACP sponsored the event, titled “The Anatomy of Prejudice.” One impetus for inviting Elliott was recent racist incidents in Long Island schools, including those involving a middle school teacher in Freeport who told her students to write “funny” captions for pictures of African American slaves, and a Longwood High School teacher’s “monkey see, monkey do” slideshow that featured a photo of a gorilla followed by a picture of four black students, said Falischa Moss, an Islip NAACP member who helped organize the event.

Sherinda Newton, a teacher at Westbury Middle School, told Elliott during a question-and-answer session that some white teachers are uncomfortable teaching topics such as slavery and the civil rights movement.

Newton, who is black, said in an interview that a white teacher last year approached her for advice because she was uneasy teaching about white oppression of African Americans in a school that, according to state education department statistics, is 98% Hispanic and black.

Newton said that, following her conversation with the teacher, the teacher felt more comfortable discussing the topics. But she believes there probably are many teachers on Long Island and elsewhere who simply avoid or limit instruction on slavery and civil rights, and that “can be disadvantageous to the child.”

Elliott said if a teacher won’t teach topics such as slavery, “you need to find another line of work … and go quickly, because these kids don’t have to be exposed to a teacher who is afraid to tell the truth.”

Stephen Burby, a white English teacher at Brentwood High School’s freshman center, said white people “don’t like what [Elliott] has to say” but need to hear her message “because it’s the truth.”

“This is something that happened about 50 to 60 years ago, yet it’s still happening today in 2020,” she said, referring to the racism that pervades U.S. society. “As a new generation, we need to take this and grow from it.”