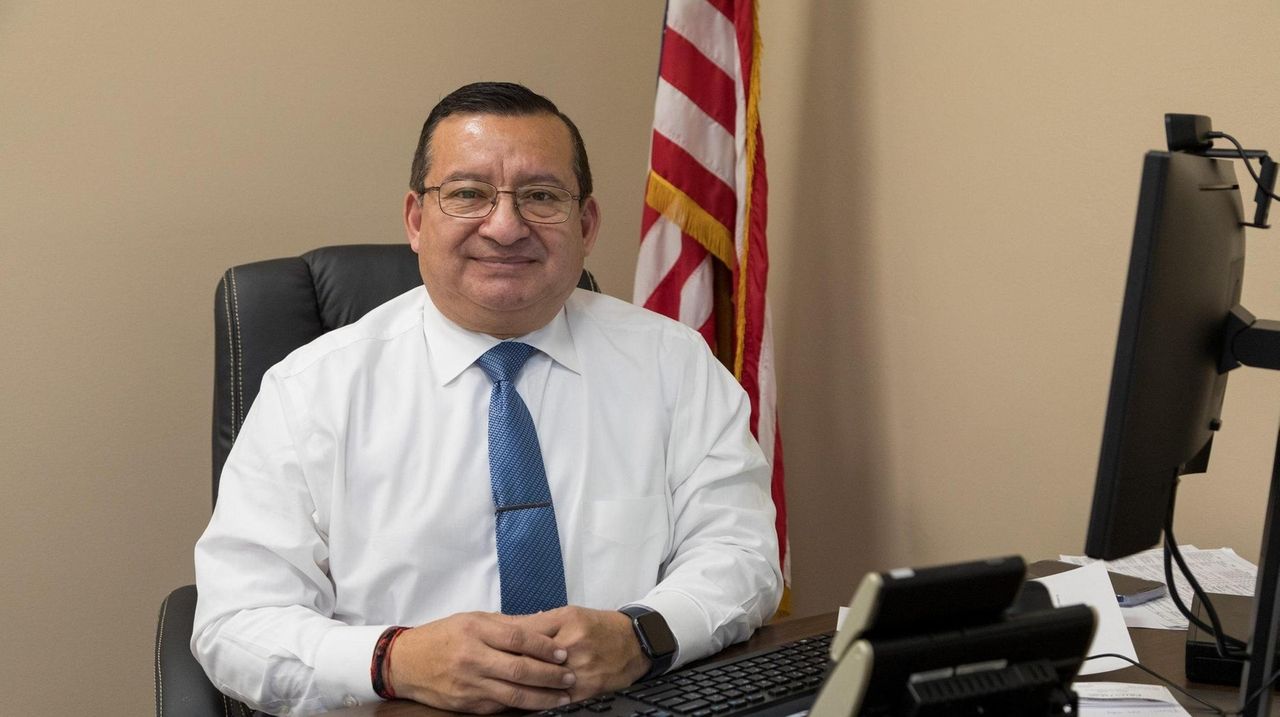 Islip Councilman Jorge Guadron spoke about his mission to have representation for all municipalities in the Town of Islip. Credit: Barry Sloan

As the first Hispanic councilman in Islip Town history, Jorge Guadron has a passion to serve members of his majority-Latino community, a group that has been underrepresented in Islip politics.

The Central Islip resident won the council seat in November under the first election following the settlement of a federal voting rights lawsuit in 2020 that created council districts. He previously ran for an at-large seat in 2019 and lost.

But there was a silver lining: the 2019 election saw a boost in voters, Guadron, 60, said, adding he discovered that the town, especially Latino-majority communities, were hungry for change that wasn’t possible under the previous voting system.

"They wanted to see somebody who looked like them and speaks like them and understands the issues and strengths of this part of town," he told Newsday on Friday. Since Islip's founding, there never has been "a minority member of the community... elected to the town board. It’s a huge event that’s happened here."

Guadron immigrated to the United States from El Salvador as a teenager following the death of his father, who he said was murdered in front of family members. His family was threatened with the same fate, which pushed him, his mother and siblings out of the country as they fled political violence in 1980.

Since arriving in Islip, Guadron has worked to better the Hispanic community and helped form the Salvadoran American Chamber of Commerce to represent business owners and bolster their success.

"Small businesses are the backbone of any local economy," said Guadron, who founded his marketing company after an 18-year career in the restaurant industry.

He’s carrying the same passion for local business owners and minority community members into his role as councilman. One of his priorities is to spruce up Roberto Clemente Park in Brentwood, which was the site of illegal dumping that forced the park to close for more than three years. More than 39,000 tons of hazardous waste was dumped in the park, which is in a community with a high number of Hispanic and Black residents.

Eight companies in May agreed to pay $627,000 in penalties for the dumping, and Guadron wants to ensure that, when available, the money is spent on beautification efforts and other priorities identified by residents.

"We’ve got to make sure, especially on my end, that we represent this part of town with dignity," he said of his district.

On his social media pages, Guadron shares both an English and Spanish translation of important messages to reach a larger audience. He said he’s pushing for the town to share more languages on its platforms, including Spanish, Urdu and French, to ensure updates are shared with all town residents.

He believes his win and background give him the opportunity to include more minority residents in conversations about their town. He plans to organize an informal advisory board that will give residents and business owners an opportunity to share feedback and priorities to his office. And while he’s eager to represent and build up a community that has gone largely unrepresented, he’s clear that his goal is to represent all residents.

"We belong in this community, which is so beautiful and diverse," he said.

Guadron, who represents Brentwood, North Bay Shore and part of Central Islip in the 1st District seat, can be reached at 631-595-3555.