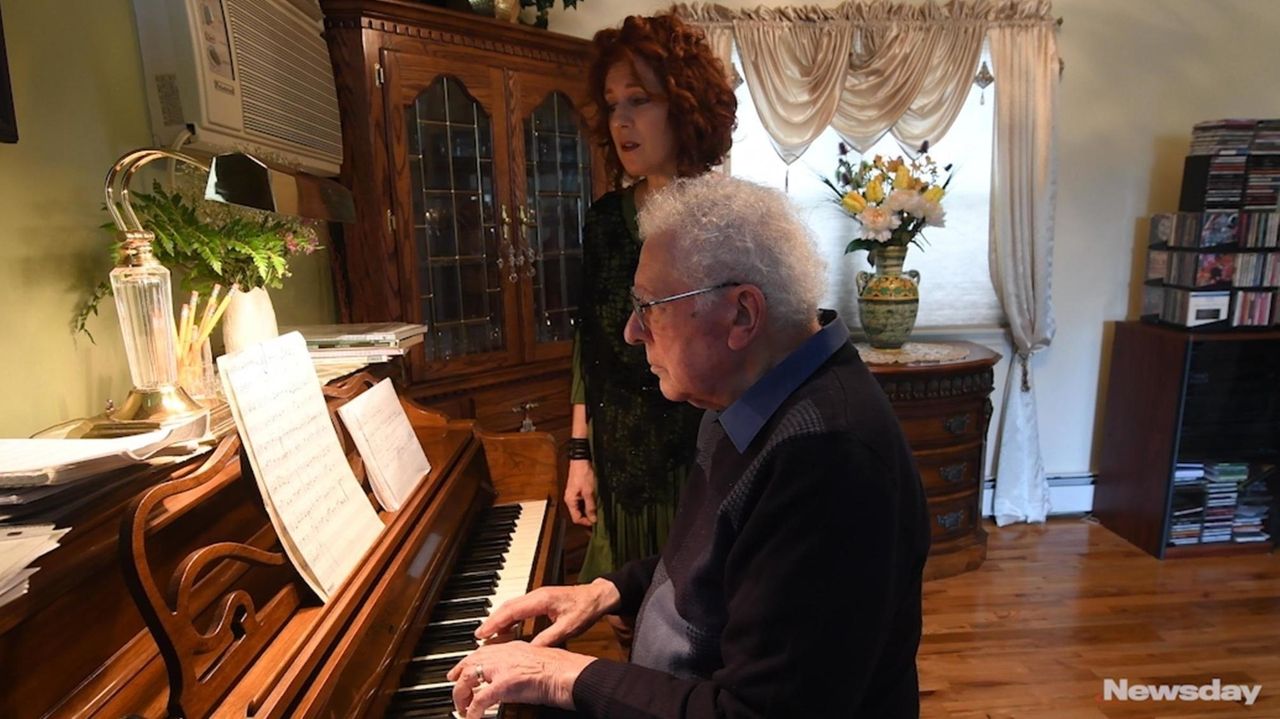 After Julius Jacobs, now 84, retired from teaching, he started learning to play the piano, a lifelong dream. Along the way he composed some tunes, but no lyrics. On Sunday, Nov. 19, 2017, at the Huntington Unitarian Church, his music will be performed with words contributed by 24 lyricists, including his daughter Carren Jacobs, of Huntington. Credit: Newsday / J. Conrad Williams Jr.

Jules Jacobs is not one to shy away from a mission. In the 1950s and ’60s, his anti-nuclear efforts included rowing in the waters of Groton, Connecticut, to oppose the Polaris missile-equipped submarine project, and walking from California to Chicago to espouse demilitarization. He traveled to the National Mall in 1963 to hear Martin Luther King Jr. deliver his “I Have a Dream” speech in the nation’s capital.

Yet words escaped Jacobs, 84, when the former longtime educator set out more than a decade ago to fulfill a personal dream to take piano lessons. He did learn to play the instrument, studying music theory and composition, and challenged himself by penning 500 melodies. The music — ranging from wistful to classically influenced to playful tunes reminiscent of sounds from the 1940s and ’50s — flowed from him, but not the lyrics.

That is no longer the case, thanks to a singing, musician daughter and her musically talented friends. They are in the final stages of preparation for a free Nov. 19 concert, “Jules Jacobs: A Life in Composition” at the Unitarian Universalist Church in Huntington that Caren Jacobs spearheaded.

“I’m very moved by this,” said Jacobs, of East Islip. “I asked my daughter if she could find me a lyricist, so she found me 24.”

He felt a sense of urgency to get his melodies set to words after a diagnosis this past spring of colon cancer that followed a prostate cancer diagnosis in 2015, for which he received radiation. A tumor in his colon was removed during surgery in June, and he had chemotherapy, but he had to stop chemotherapy after two rounds when a bad reaction sent his white blood cell count plummeting. “Right now I feel 100 percent,” Jacobs said. “I’m feeling well, and like I used to.”

His daughter, who lives in Huntington, will perform a song with her a cappella group, Wild Ginger, called “Daybreak.” It is Jacobs’ only melody that will be performed to which he wrote the lyrics.

“The beauty of this is a community has come together to help me honor my father,” said Caren Jacobs, 55. “It’s all done for love. And I think that us doing this is helping lift his spirits. He’s very humbled by it.”

For musician Jennifer Grace, 57, of Centerport, it’s about being part of something bigger.

“In this time of so much harshness, it’s an opportunity to do something about kindness and caring and being creative, and to honor someone,” she said.

COMMON TIME IN KEY OF C

Most of Jacobs’ melodies are in the key of C and in common time, with four beats to a measure. His longtime piano teacher, Matthew Vanek, 75, of Babylon, played them for a CD recording so they could be shared with the lyricists.

Jacobs began taking piano lessons when he was 70. He retired in 1992 from his 30-year teaching career at various elementary schools in the Central Islip district and figured it was time.

After several years of lessons, he began to write melodies, then to learn chords to fill out the melody line. Most weeks he would pen a melody, and he and Vanek would work on chords. Jacobs acknowledges that Vanek’s often were better.

“I’m not a good piano player, but that allows me to make my melodies simple,” Jacobs said. “If you listen to Cole Porter melodies, they’re very simple — listen to ‘So in Love.’ I think the best melodies were written in the late ’30s: Cole Porter, the Gershwin brothers, Hammerstein and Rodgers.

“You get moved rhythmically with today’s music, but it doesn’t give you any feeling,” Jacobs added. “I want to laugh, cry, be moved romantically.”

The lyricists are putting their spin on the songs, with Jacobs’ blessing. Several also are using his words from a video by Greg Blank as springboards for their lyrics. Blank, 43, of Huntington and a friend of Caren Jacobs, made the video about Jacobs so the lyricists could get to know the man whose melodies they are setting to words.

“It’s an interesting phenomenon to take someone else’s melody and make it your own,” said South Africa native Toby Tobias, 58, of Huntington Station.

Jacobs once attended a songwriting class Tobias offered, and has met him at various performances. “There’s a nice vibe about this whole thing,” Tobias added. “We’re a pretty close-knit music community.”

Janice Buckner, 67, of Huntington, and Emily Eisen, 68, of Northport, came up with their lyrical concept while walking at the beach. Eisen made sure to incorporate Jacobs’ reaction to when his students called his antics crazy.

“Our song will be interactive and silly, but it will tell Jules’ story,” Buckner said.

Where it ended up is far from where they started, Buckner noted, but the longtime friends enjoyed collaborating on the project. “The dominant melody is very recognizable,” Eisen said. “And being at the beach gave it a whole different kind of energy.”

Songwriters Eric Eaton and Jennifer Grace have corralled a group of seven to play one of Jacobs’ melodies, and are taking a full-on approach to orchestrating the melody, with flutes, a keyboard, acoustic bass, guitar and the occasional piccolo burst. Eaton, 57, of Centerport, made the arrangement with a nod to the music of the late 1940s and early ’50s.

They settled on a story about birds — enter the flutes and piccolo — that fall in love, and retained Jacobs’ title of “I Know” and used it in the lyrics.

“Jules has fought for equality and justice, and we honor that with birds of different species falling in love with one another,” Eaton said.

“Anything that divides us is wrong,” Grace said. “We’re all the same, and we tried to use that meaning, two birds of different species who still care about each other.”

Eaton wrote out the music notes in typeset, cleaned the melody up a bit and rewrote parts to give it an appropriate tempo and make it heavily rhythmic so they could rhyme the lyrics.

“He’s going to be able to recognize his melody, but it’s been polished up,” he said. “It all just works. I can’t wait to perform it. This is a big deal we’re doing.”

The threads of Jacobs’ life will combine at the concert. Jacobs’ daughter Kim Jacobs, 51, of Deer Park and son Jason Jacobs, 53, of Los Angeles, will be on hand, along with Ron Nash, 76, of Santa Rosa, California, his former director from his Community Free Theater days in St. James.

Jacobs has an audition coming up at the end of the month for a role in a production of “12 Angry Men” at Theatre Three in Port Jefferson. It would mark his 151st play. His acting life is how he met his wife, Laura Jacobs, 62, when they were cast in the Sam Shepard play “Buried Child” in 1980. She was an art teacher in Oceanside before retiring in 2015.

“I really feel like I’ve lived more than one life,” Jacobs said as he recollected his time living in Greenwich Village in the late 1950s with his first wife, Miriam Jacobs, whom he later divorced, his Cold War-era nonviolent protest stances, his time as an educator and his musical studies.

Acting and the creativity it unleashes has been a huge part of Jacobs’ life for 55 years, from his first role in a teacher’s fundraising production in Central Islip.

“It civilizes you. It makes you human,” Jacobs said. “You create a character who’s not you, yet is you. It lets you step outside yourself.”

Songwriter Annie Mark, 55, of East Northport, is collaborating on one of the melodies with Andrea Cetlin, of Northport. Mark’s son, Zach Mandernach, a piano player, helped her work out extra chords to fit the melody with the words she is writing and will play on guitar. The goal is to serve the song with reverence and respect, Mark said.

“The sum of the parts will be more than we could have come up with,” she said, adding that Jacobs’ talk of acting and art being connected to the creative spirit inspired her.

Jacobs is feeling so good that the concert preparations left him feeling as if they were for a memorial concert. Blank suggested he look at the upcoming show as a lifetime achievement award.

A LIFE IN COMPOSITION

The free concert will be at 6 p.m. Nov. 19, at the Unitarian Universalist Church, 109 Browns Rd., in Huntington. Proceeds from a freewill offering will be donated to St. Jude Children’s Research Hospital in Memphis, Tennessee.