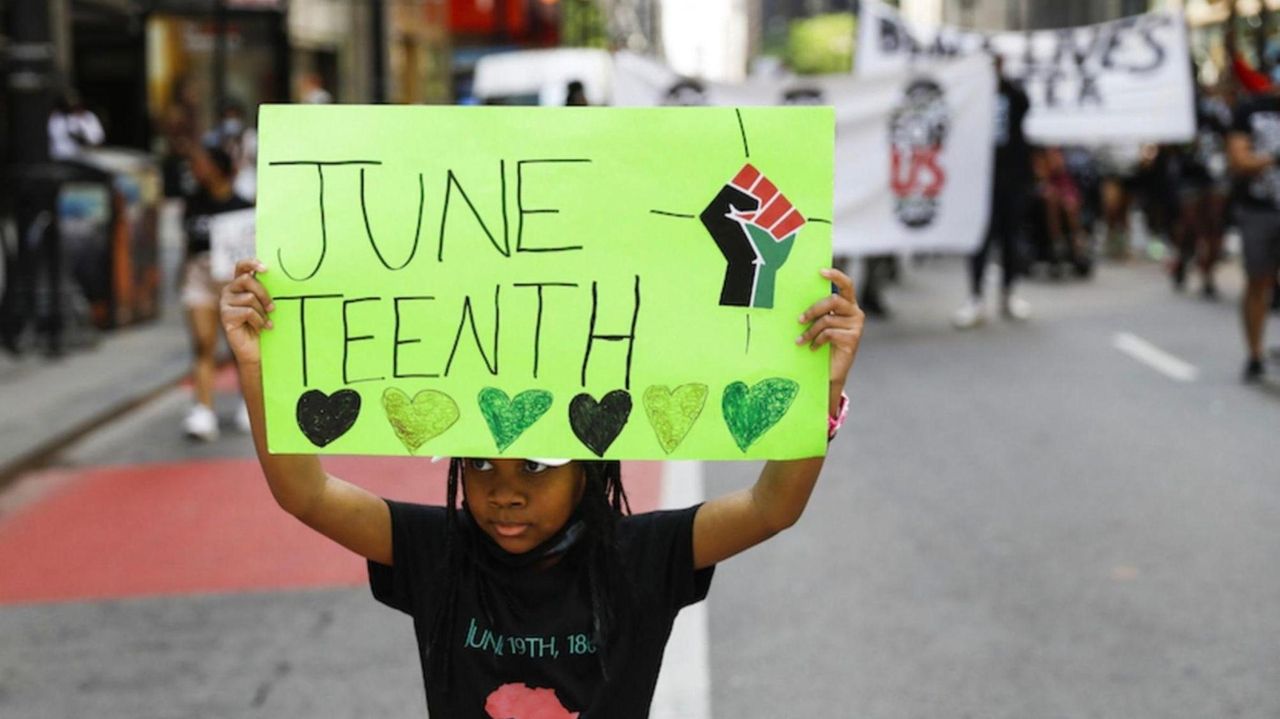 Communities throughout Long Island are preparing Saturday to honor Juneteenth, which the federal government Thursday declared a national holiday.

Several Long Island communities began to recognize Juneteenth as a holiday last year amid protests calling for social justice and recognition of African American heritage. The holiday is nationally celebrated to mark the end of slavery in 1865.

Juneteenth recognizes the day the last enslaved African Americans in the Confederacy were told about their emancipation.

Events on Long Island will include the Village of Hempstead’s fourth annual Juneteenth celebration at Denton Green Park and in front of Hempstead Village Hall and a food truck festival at Cow Meadow Park in Freeport. "We’re excited with the direction Hempstead is going in and it’s time to come together to follow the African proverb, it takes a village to raise our children," Hempstead Mayor Waylyn Hobbs said. "It’s commemorating how far we’ve come, but we still have challenges and we’re celebrating as a nation. We have to remember our past and know where we came from and speak loudly for civil rights and equality."

"It shows the strides we’re making as a nation. Unfortunately, America has been very slow in recognizing the ills in the past toward African Americans in the community and advancement moving forward," Hobbs said. "We still have social injustice and inequalities we have to admit as a nation, shows signs of better days ahead."

In Huntington, officials on Wednesday recognized the work of a freed slave and Union Civil War soldier, also known as "The Pickle King" of Greenlawn, Samuel Ballton.

Huntington designated Friday as a holiday to honor Juneteenth and dedicated a stretch of street at Taylor and Boulevard avenues in Ballton’s name.

Ballton escaped from slavery in Virginia at the start of the Civil War and went to fight with Union soldiers. He risked his life to free his wife from slavery and settled in Greenlawn working on a farm for Alexander Gardner.

Ballton saved enough to purchase his own land where he grew nearly 1.5 million cucumbers, sold as pickles in Queens one summer. He also identified a plant disease and shared with other farmers how to protect their crops.

Town officials honored him in a ceremony with his descendants and the sons and daughters of Union Veterans of the Civil War.

"His story is like out of a movie," Huntington Councilwoman Joan Cergol said. "We celebrate him as figure in not just Black history, but Huntington history and American history. We need to come together and cheer them on."

Freeport organizers with Black Legacy Partners and Fidelis Care will host a unity march and food festival in Freeport on Saturday.

"We will reflect on June 19 as an anniversary which stands for freedom for all, unity against injustice, and the deserving recognition of an important day in our nation’s history," Freeport Mayor Robert Kennedy said.