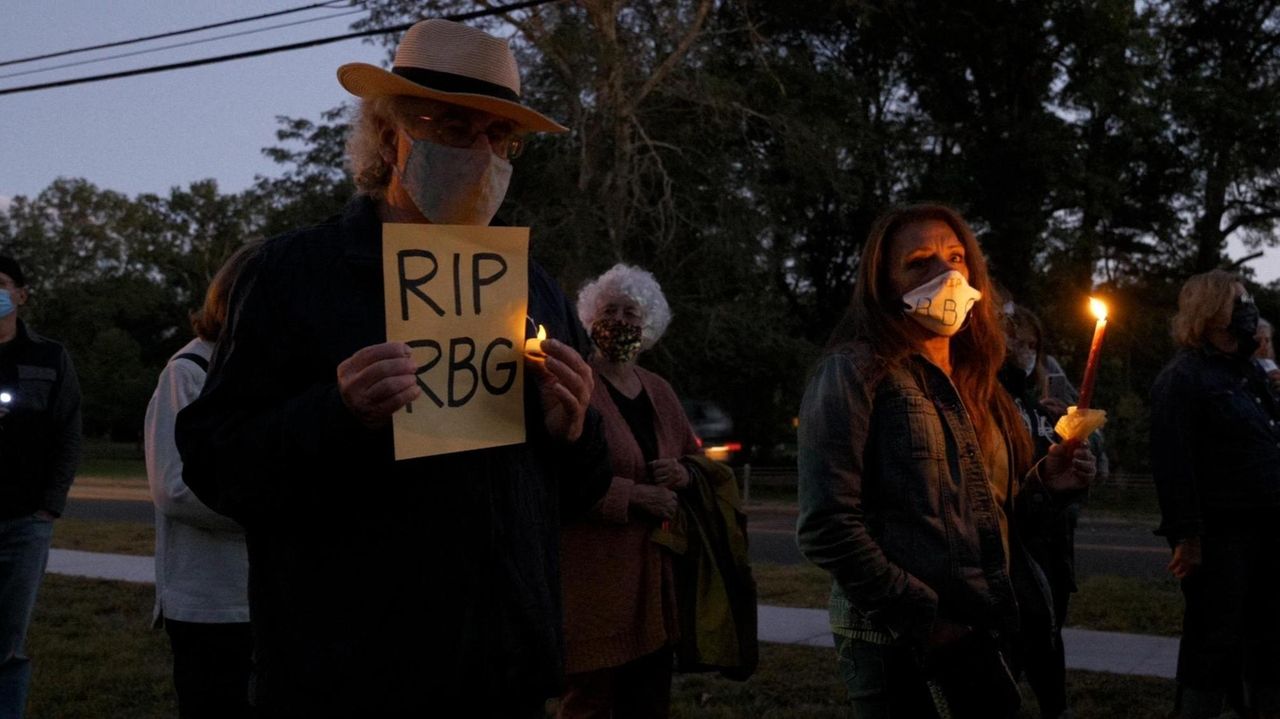 A vigil to remember Ruth Bader Ginsburg was held in Huntington on Sunday. Credit: Kendall Rodriguez

Dozens of people on Sunday evening mourned Justice Ruth Bader Ginsburg at a rally in Huntington Village to demand that her replacement’s nomination be withheld until after the 2020 presidential election winner is inaugurated next year.

At the vigil, organized by a Huntington pediatrician who has rallied against President Donald Trump since after his inauguration, attendees held candles and signs memorializing the late justice, who died Friday night of complications from cancer.

"Take their feet off our necks. No confirmation til January,'' read a sign one man was making at the vigil.

Near Main Street and Park Avenue, where the mourners gathered, musicians played "Amazing Grace" as the sun set.

The prospect that Trump will keep his promise and appoint a replacement — tipping the U.S. Supreme Court’s balance in favor of conservatism — has jolted the presidential race, with about six weeks until the election.

Word of the justice’s death kicked off yet another round of partisan ping-pong over who is to blame for the judicial sturm und drang.

The vigil was organized by Dr. Eve Krief, 51, who estimates she has been behind at least 10 rallies in the past few years to protest Trump.

Krief, a Democrat, said she’s worried that a more politically conservative court would, among potential rulings, repeal Roe v. Wade, which legalized abortion in every state; side with Trump on immigration policy; erode voting rights; and overturn the Affordable Care Act, known as Obamacare.

"The future of the ACA and the health care of millions of Americans lies in the balance of an upcoming Supreme Court decision, all this while thousands more Americans lie sick and dying every week," said Krief, who practices in Huntington and lives in Centerport.

A case that could determine the fate of Obamacare — one of Barack Obama's signature legacies — is scheduled for one week after the election.

Krief said she admired the justice for her work over the years that bolstered feminism.

"She was a champion of women’s rights and fought gender discrimination in the workplace. She understood what that felt like herself being … at the top of her class yet found difficulty getting a job out of school because she was a woman."