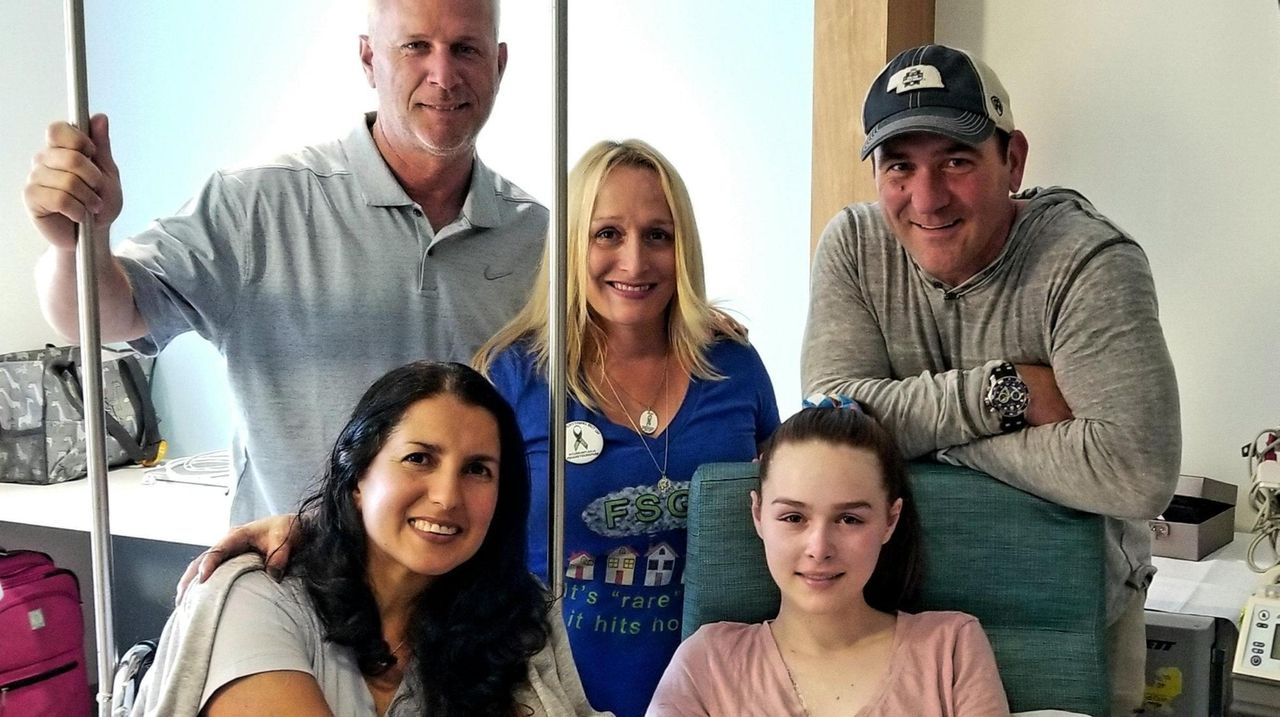 Lisa Calla of Smithtown and Shannon Mulroy of West Islip became friends when their sons were teammates on the St. Anthony's High School baseball team. When Shannon's daughter Julia needed a new kidney, Lisa knew what she had to do. On July 2, the moms talked about the lifesaving transplant procedure and the bond that will keep these families together for life. Credit: Newsday / Shelby Knowles, John Paraskevas; Photo Credit: Guy Calla

Julia Mulroy was running out of time.

For two years the West Islip 16-year-old knew she was afflicted with focal segmental glomerulosclerosis, a rare kidney disease. Her mother, Shannon Mulroy, said she was in end stage renal failure.

Shannon used social media to send a gut-wrenching letter describing Julia’s condition and pleading for someone to donate a kidney.

“I sent that letter out last Feb. 26 and it went out to everyone in my contacts,” Shannon said. “I decided to put it out on social media. It was very hard to come out publicly, but I felt I had to either choose a casket or choose social media. The choice was clear.”

But after the letter, the desperation deepened.

“I had several people reach out to me saying they would give their kidney and that really got our hopes up,” said Shannon, who has worked with the NFL as a massage therapist for 17 years. “And they disappeared. Either they didn’t follow through with the hospital questionnaire to get tested or they decided there was too much risk. I get it, the decision to risk your life to save someone else’s is a truly selfless act.

“We were out of time, she was so sick. There are more than 96,000 on a waiting list for a kidney donor. Julia has a . . . blood type of O positive and that cut the number of donors significantly. I tried not to think of life without my daughter, but it was impossible. I cried every night. I had exhausted all avenues in our search for a living donor.”

Then, that dogged search and Shannon’s unyielding faith were rewarded. Julia and her donor were brought together.

Lisa Calla of Smithtown, a 50-year-old mother of two boys, made a decision that would turn into the save of a lifetime. Calla’s sons and Mulroy’s son are baseball teammates at St. Anthony’s High School. During a game in March, the two mothers were sitting in the bleachers watching their sons play. In a heartfelt conversation, Mulroy completely opened up about Julia and her desperate situation. Afterward, Calla was motivated into becoming a living donor — determined to save a young person’s life.

“I was all in, there were never any doubts, no stumbling blocks about why I was doing this,’’ Calla said. “From the beginning it was my faith that brought me to quickly decide.’’

Unbeknownst to Mulroy, Calla filled out a donor questionnaire from NewYork-Presbyterian/Columbia University Irving Medical Center to see if she was a compatible match. Brian Runge, the chief living donor coordinator, called the next day and started scheduling Calla’s medical testing.

“We found I was a blood match,” Calla said. “And then they wanted tests to make sure I was healthy and make sure our antibodies matched. Once we were at that point there was no looking back.”

“I feel great,” said Calla, a lawyer of 23 years and a dean in workforce development at Suffolk County Community College. “Shannon shared what was happening with Julia and it really hit home. I couldn’t believe what she was going through. I immediately thought about my two boys. No one wants to feel like they’re losing a child.

“I did some research to see what was required and once I decided to go forward I didn’t want to disappoint. It felt like we were meant to come together in those bleachers at St. Anthony’s.”

“Julia did extremely well,” Sandoval said. “I’m happy to report she is recovering and in excellent condition. It was an outstanding, successful surgery. We didn’t expect any less for her.”

Just one day after the surgery, Julia was up and out of bed. “I feel tired, but super excited about the future,” she said. “My mom is my hero. Lisa is my savior.”

John Mulroy marvels at the strength and determination of his daughter, and his wife’s maternal drive.

“My wife mentions the dream team of doctors we were lucky to have,” he said. “She doesn’t realize that without her and her relentless mission to help our child that dream team never materializes.”

“Through the entire process she would message me asking about Julia,’’ Shannon said. “She never once talked about her own thoughts or fears. The entire focus was always on Julia and how fast we can get this done so she can get healthy.

“No words can describe the amount of love our family has for Lisa and her family. It’s like we gained another family, connected forever. After the surgery, Lisa came to our room and I hugged her and didn’t want to let go. Her gift of life is the ultimate selfless act of kindness and truly inspiring.”

But it's not a cure

There is no known cause or cure for focal segmental glomerulosclerosis, a disease that attacks the kidney’s filtering units causing scarring. The scarring leads to permanent damage and failure.

“The transplant is just another treatment. It’s not a cure and that’s the reality,” Shannon said. “And because the disease is so aggressive it will try to attack the new kidney. The doctors will do aggressive treatments to try to prevent that.”

Julia’s life has already changed. She will no longer be on a restricted diet of low sodium, low potassium, low phosphate and low protein.

“Now, I can eat Chik-Fil-A!” she smiled. “I can eat foods without reading all the labels. I won’t feel guilty about anything.”

Lisa was discharged three days after the operation. Two days later she was walking in her yard with husband, Guy Calla. They were beaming with pride.

“We’re together 32 years, married for 22, and I had mixed emotions,” Guy said. “I love this woman with all my heart. She told me she was determined to see it through. And I was very concerned for unforeseeable things that could happen down the road, but life is like that. So I put that aside and thought about the benefit for Julia.”

“How do I say thank you for saving my daughter’s life?” Shannon said. “It doesn’t feel like it’s enough. From day one, I said to Lisa, ‘If you’re 99 percent, you can walk away.’ She said, ‘No, I’m good, I’m 100 percent in’. She spent hours going to doctor’s appointments at Columbia hospital and many days it was a minimum of eight hours. And driving in and out of Smithtown with Guy, who was her rock. We will cherish this gift of life, and love and honor them, always and forever.”

“I’ve told people I could not have gone through this process without the total support of my husband,” Lisa said. “He’s been by my side the whole way. I explained to him why I wanted to do this.”

After the operation, Lisa and Julia spent some quality time together.

“I could not be more thrilled than seeing the pink color in her face and her looking healthier,” Lisa said. “I was told the kidney started working immediately. It was the best feeling in the world to see her doing well. We’re blessed. I felt this was in God’s hands and this is what I was meant to do.”

“Julia is still sore, but up and walking, doing physical and occupational therapy,” Shannon said. “She is tired and sore in her arms from the two or three times a day for blood draws and infusion. We’re confident in her aftercare team.”

Sandoval said the management for patients like Julia is handled by a team that includes surgeons, a nephrologist, social workers, nutritionists and nurses.

“Everyone will have a say in her discharge planning,” he said. “It’s very important, especially in the pediatric population. And the real hero here is the donor — and the huge impact by giving the gift of life.”