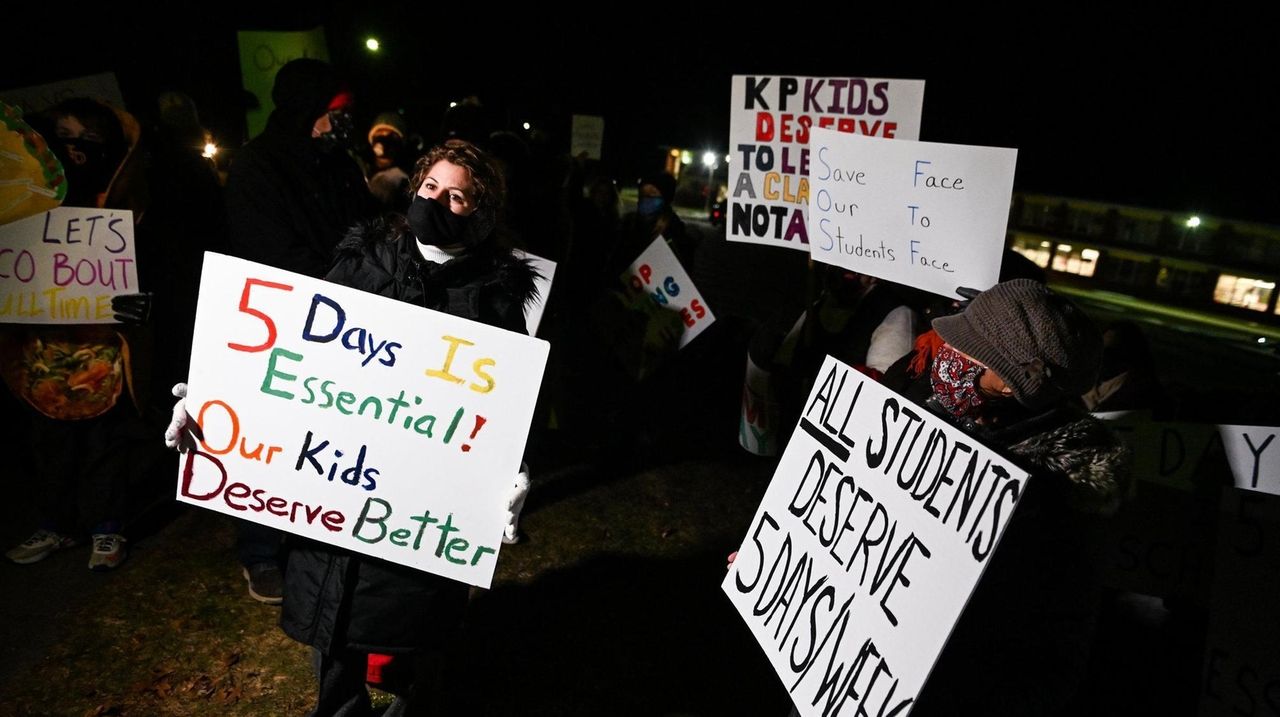 Parents in Kings Park protested on Tuesday, asking for their children to go back to in-person school five days a week.  Credit: Newsday / Steve Pfost

Kings Park School District Superintendent Timothy Eagen will present a plan on Tuesday for a phased return to five-day, in-person school for the district’s secondary students, he said at a Board of Education meeting this week.

But that promise came with warnings that the district lacks current written guidance from health authorities and that a return could require more quarantines and students sitting close on buses and in classes because of space constraints. It could also push some students into full remote schooling because of safety concerns they might not have otherwise had, Eagen said.

A chorus of complaints followed from parents who said the plan should have come sooner and that administrators had showed little appreciation for their concerns.

Tom Richardson, a retired FDNY firefighter who works in hospital materials management and has two children in district schools, said Eagen had painted a grim picture of the risk of return but ignored the harm students are suffering from remote learning: "If you were a football coach, we would lose that game before we got out on that field...These kids are hurting, they’re not learning anything."

But parents, who rallied outside the district administration building before Tuesday's meeting, said they had seen little progress in Kings Park even as some neighboring districts, including Smithtown, returned to full-time schooling. Especially frustrating, said Cynthia Grimley, who works in higher education disability services and has two children attending district schools, was watching Kings Park sports return before full-time schooling: "When I see a picture of two wrestlers on the floor head to head… I feel like the rules don’t make sense," she said in an interview.

Two members of the girls basketball team, which won the Suffolk County championship on Sunday, were diagnosed with COVID-19 in recent days. The district is running contact tracing and 19 athletes are in quarantine, Eagen said.

The district can make some moves to manage the increased risk of five-day schooling, such as installing barriers around desks and at cafeterias to increase capacity, Eagen said. But some space and logistics problems will be hard to overcome: Safely accommodating all children in limited cafeteria space still presents a challenge, BOCES students are already using the high school library, and the middle school, with its small auditorium, has limited overflow space for more students.