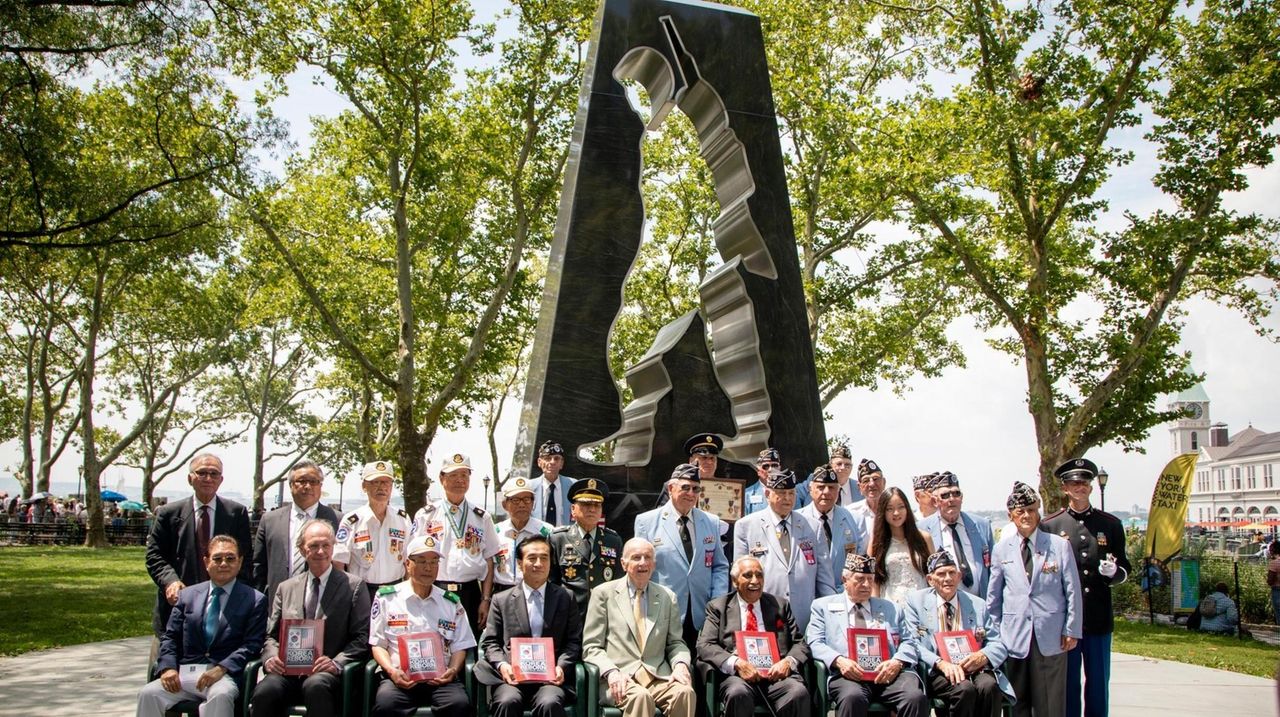 Sal Scarlato remembers the armistice that ended Korean War combat like it was yesterday.

Bedridden 65 years ago from wounds caused by an enemy grenade, Scarlato, now 85, said he heard the news shouted by two hospital corpsmen who offered him a shot of liquor.

“Everybody yelled, screamed, carried on,” Scarlato, now of Hauppauge and president of the Korean War Veterans Central Long Island Chapter, said Friday. “Some of the guys cried — you know, we lost a lot of buddies over there, unfortunately.”

Scarlato, then a Marine private, was among veterans of the Korean War who rose Friday afternoon to the sound of taps at an event in Manhattan’s Battery Park, honoring the halting of fighting on July 27, 1953.

But the war ended by truce, not a negotiated peace treaty, and tensions remain between North and South Korea, with American military personnel stationed in the south and the looming nuclear threat from the north.

“The Korean War is often regarded as the forgotten war. However, we Koreans will never forget the sacrifices all of you have made,” said Park, who later praised President Donald Trump’s efforts toward denuclearizing the north.

He is hoping for “complete denuclearization,” Park said, which is “the number-one priority” that would be “good for everybody.”

More than 36,000 American military personnel died in the war, which spanned 1950 to 1953, and at least 2.5 million people, including many civilians, were killed in the conflict.

In June 1950, the relatively localized conflict reached the international stage when the north, aided by the communist Soviet Union, invaded the south. The United States and the United Nations joined on the south’s side and China on the north’s.

The armistice anniversary coincided with North Korea’s release of remains believed to be those of 55 American military personnel. Those remains left Friday for South Korea, a result of Trump’s meeting with the North Korean dictator, Kim Jong Un, last month. A formal repatriation ceremony will be held in South Korea on Wednesday, The Associated Press reported.

In Battery Park, a memorial statue loomed over the ceremony: an obelisk and a cutout in the shape of a soldier. The memorial was dedicated in 1991 as one of the first memorials in the country to commemorate the war.

Of the two dozen or so American military veterans there Friday, about eight were from Long Island, according to Jonathan Corrado of the Korea Society, which helped sponsor the ceremony.

Among the honorees was Charlie Rangel, the former congressman and Korean War veteran who suffered battlefield injuries in an all-black artillery battalion and was awarded a Purple Heart and Bronze Star for valor.

“I enlisted right over here at Whitehall Street,” said Rangel, a longtime Democrat, gesturing with his cane. He recalled being “so bored” on his base before being sent off to war.

“We had no idea where the hell Korea was,” Rangel said.