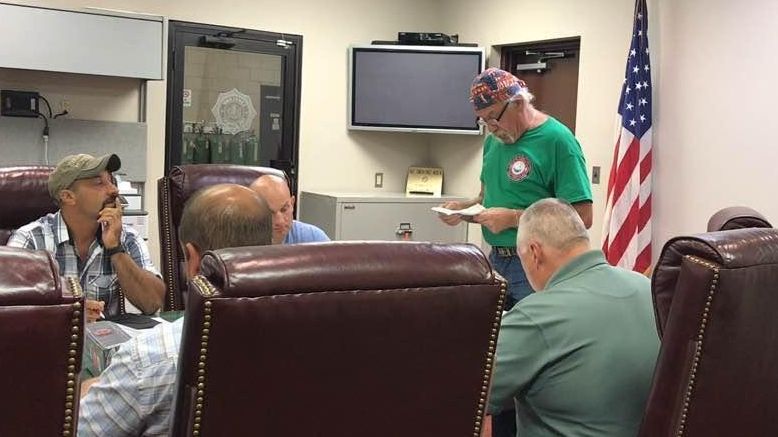 Gerald "Jerry" O'Mara reads a prepared statement to the Lakeland Fire District's board of commissioners. O'Mara apologized for inflammatory remarks he made on social media and stepped down from his position as board chairman. He remains a fire commissioner. Sept. 20, 2017. (Credit: Newsday / Stefanie Dazio)

A suspended Lakeland firefighter admitted Wednesday night he made inflammatory remarks on Facebook about an East Meadow mosque and stepped down as chairman of the hamlet’s fire district.

Gerald “Jerry” O’Mara struck a contrite tone as he spoke to fire district commissioners during their meeting at the Lakeland firehouse in Ronkonkoma.

“I apologize to anyone I hurt by my insensitive commenting and I am voluntarily stepping down as chairman of the board of fire commissioners,” he said, reading from a prepared statement.

The commissioners voted Wednesday to accept his decision and installed vice chairman John A. DiFilippo as the board’s new chairman.

“We need to work out the details,” Robert Flynn, who is an attorney for the fire district, said.

O’Mara has been under investigation since mid-August, shortly after derogatory comments appeared on Newsday’s Facebook page in a response to a posting about the Long Island Muslim Society’s attempt to add a second floor to its East Meadow mosque. The comments, made by “Jerry Omara,” also identified the writer as a Lakeland fire commissioner.

Flynn said the social media policy prohibits members from using Lakeland “emblems” and making comments that are “a disservice to the community.”

The Aug. 15 comment, which has since been deleted, read: “Let them put a fifth floor on the building and then take them up to the Roof and throw them off it.”

O’Mara said in a brief interview Wednesday night that he’s been a Lakeland firefighter for 25 years and an elected commissioner for 15 years. He is up for re-election in December but said he has not decided if he will run again.

He said he does not plan to appeal his suspension.

“You have to pay the penalty,” O’Mara said.