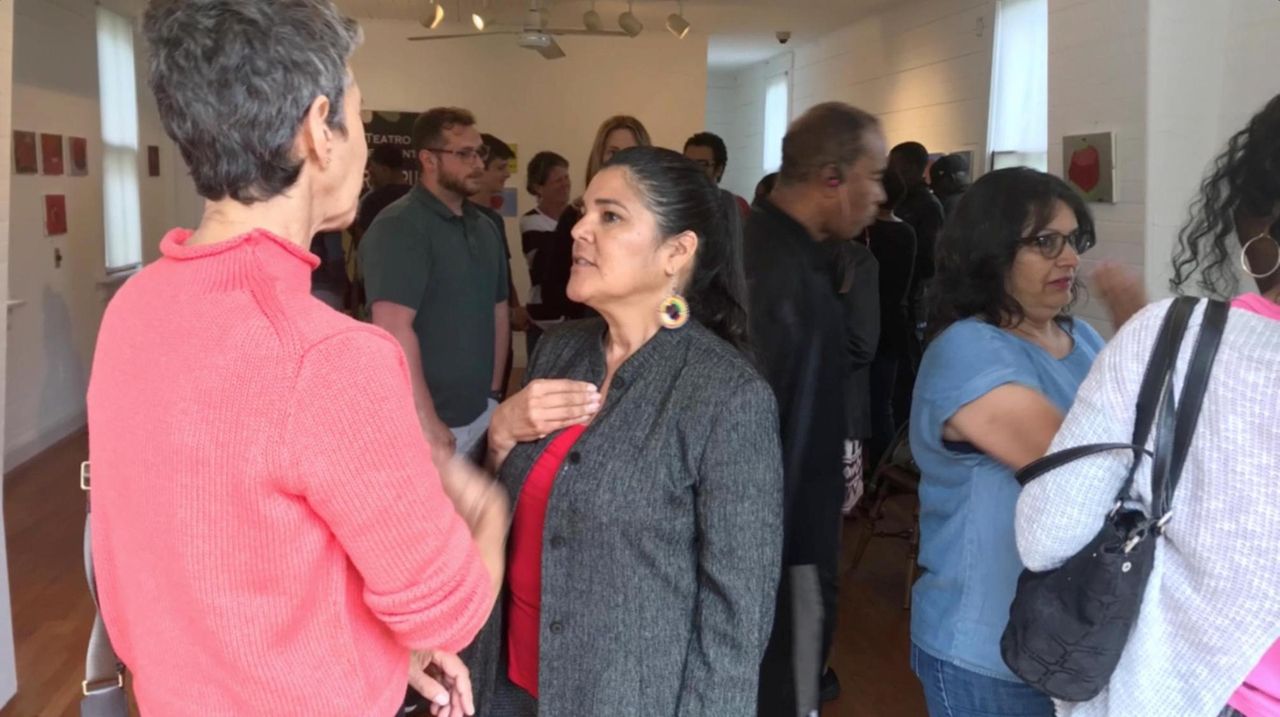 Margarita Espada, the founder and executive director of the Teatro Experimental Yerbabruja, talked on Wednesday about the group's new space for artists in Bay Shore. Credit: Newsday / Antonio Planas

Margarita Espada spearheaded a grassroots’ movement that nearly came to a halt when the doors to her Central Islip arts center closed last year.

The Teatro Experimental Yerbabruja quickly found a new home in Bay Shore — a 1,600-square-foot renovated firehouse on Second Avenue — a space better suited for growth and sustainability, she said.

“I was devastated to leave Central Islip,” said Espada, who founded Teatro Yerbabruja — as it is commonly known — and serves as its executive director. “The [new] space is really about how we are growing and becoming a safe place for Latino artists and non-Latino artists to come here to have a nice opportunity to see different art and to really work together. We are really building a sense of community at large.”

Teatro Yerbabruja was formerly on Carleton Avenue in Central Islip where it operated out of a 2,250-square-foot space. The center shuttered late last year following a fire inspection deeming a part of the building was not up to code.

Espada, who is the only paid employee, said her compensation only amounts to part-time wages. She now sees the opportunity to add employees while the organization branches out into Bay Shore after mostly operating in Central Islip and Brentwood.

Steve Bard, the organization’s board president, said the group has widened its scope.

“At the beginning, it’s Puerto Rican-centric, then it’s Latino-centric, then it’s a much broader range of people of color,” he said “And then it stretches to everybody. We wind up with off-shore [performers], Moroccan, Saudi, French, Sudanese.”

Espada, 53, founded the group in 1989 in her native Puerto Rico. The name Teatro Yerbabruja is derived from a plant that grows in unwelcoming environments and has healing qualities. In 1996, Espada came to Long Island to continue her education at Stony Brook University, where she graduated with fine arts degree in dramaturgy.

After the group became a state nonprofit in 2004, a decade passed before it found a home in Central Islip. Before then, artists performed in public spaces such as parks, plazas, libraries or at universities and high schools. The arts center in Central Islip hosted performances such as theater, poetry, music, dancing and exhibits.

“There was a need to build my advocacy,” said Espada, who calls herself an “artivist.”

“There was need for someone to have this conversation, to open the space, to request and then demand funding for the arts that we’re still fighting for,” she said.

“If you take art and put it in a ground-zero environment, it blossoms into a better quality of life. It was like a dress rehearsal for the bigger revitalization,” he said.

On June 13, Teatro Yerbabruja hosted Bay Shore High School students and their parents in an exhibit called “Emotion & Color.” The center was used as a gallery where special-needs students’ art depicting different renditions of a painted apple were hung on walls.

“As a mother, I’m very appreciative," she said. "They took the time to display their work and integrate these students.”