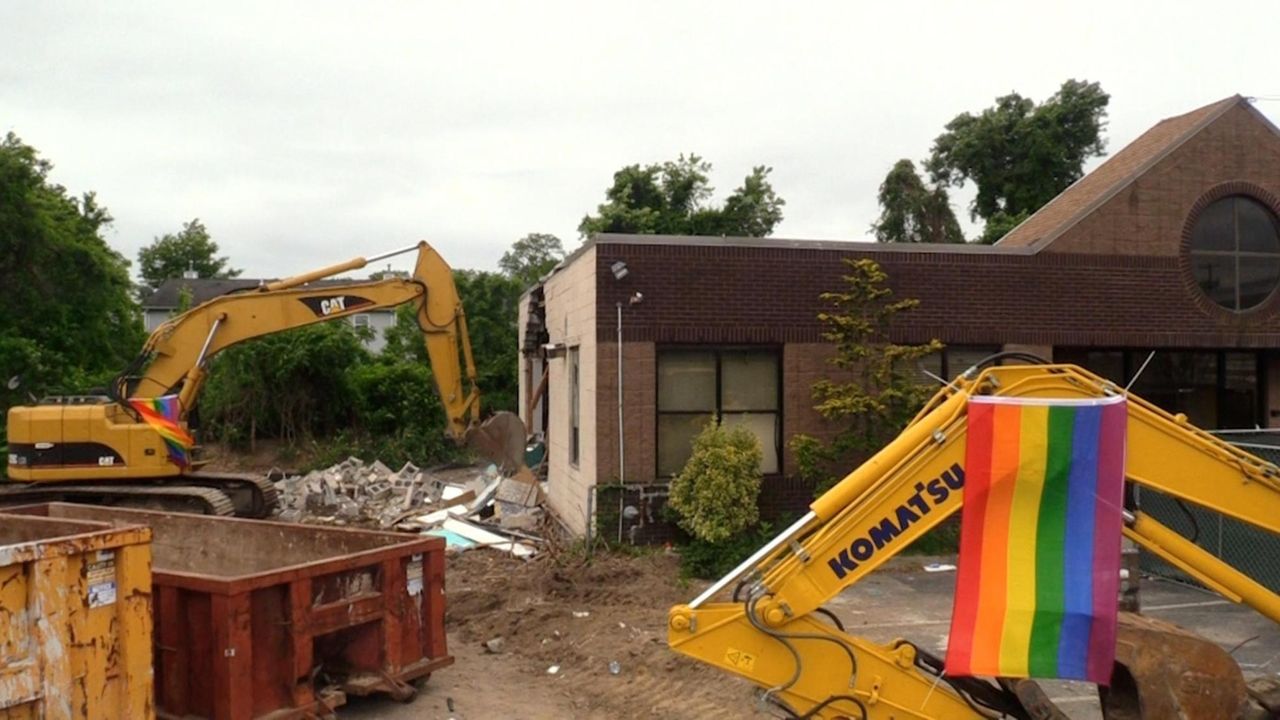 A Pride flag-draped excavator helped make way Monday for a Bay Shore affordable housing development for seniors that is the nation’s first aimed at those who identify as lesbian, gay, bisexual or transgender.

When completed, the 75-unit complex will offer members of Long Island’s LGBT seniors a housing option that does not force them to “recloset” themselves in their golden years, said LGBT Network CEO and president David Kilmnick.  While the complex will be LGBT-friendly, it will be open to all who meet age and income requirements and will abide by federal fair housing guidelines, he said.

“There’s no better way to honor the generation of Stonewall who started the modern LGBT rights movement than to say you took care of us, we are going to take care of you,” Kilmnick said during a construction kickoff ceremony at the site.

June is Pride month, and this year  is the 50th anniversary of the riots that followed a police raid at the Stonewall Inn in Greenwich Village.

A Union Avenue building that was demolished Monday is the former headquarters of the nonprofit LGBT Network, which moved last month to a 15,000-square-foot center in Hauppauge. The apartment complex to be built in its place will be anchored by a new, 8,000-square-foot community center for the network. A lottery for the units will be held in 2020 and the complex is expected to open to tenants in early 2021, Kilmnick said.

The D & F Development Group of Levittown is behind the $30 million affordable housing project, which is funded through a mix of state and federal tax credits, state loans, $1.5 million from Suffolk County and private investment.

Suffolk County Executive Steve Bellone said the project would be a boon to downtown Bay Shore, as well as promote inclusivity.

“It’s important that we continue to convey the message in every way possible that Suffolk County is a place that celebrates its diversity and . . . is a place of love,” he said.

The United States is home to an estimated 3 million who identify as LGBT, a figure expected grow to 7 million in 2050, according to SAGE National LGBT Housing Initiative. Hundreds of thousands of LGBT individuals are estimated to live on Long Island, Kilmnick said, and the LGBT Network serves about 2,500 people per month.

Kilmnick said 48 percent of LGBT couples experience adverse treatment when seeking senior housing, a figure that is even higher for transgender people. Thirty-four percent live in fear of having to recloset themselves in their older age, and about half of states do not have laws prohibiting housing discrimination for sexual orientation or gender identity, he said.

LGBT Network member Brian Nichols, 73, said although he is lucky enough to have secure housing, the new development will allow other older LGBT people to live a life of acceptance.

“People can be who they want to be," he said. "They can put their Pride flag out, they can hold the hands of their lover, their boyfriend, their girlfriend. It’s such a good feeling to have a facility here like this on Long Island.”

Kilmnick touted the nonprofit organization’s expansion, which not only includes its new larger headquarters but a soon-to-begin project to construct a community center and medical facility in Patchogue.

“There’s no other better place to live, I think, for LGBT folks than Suffolk County,” he said.