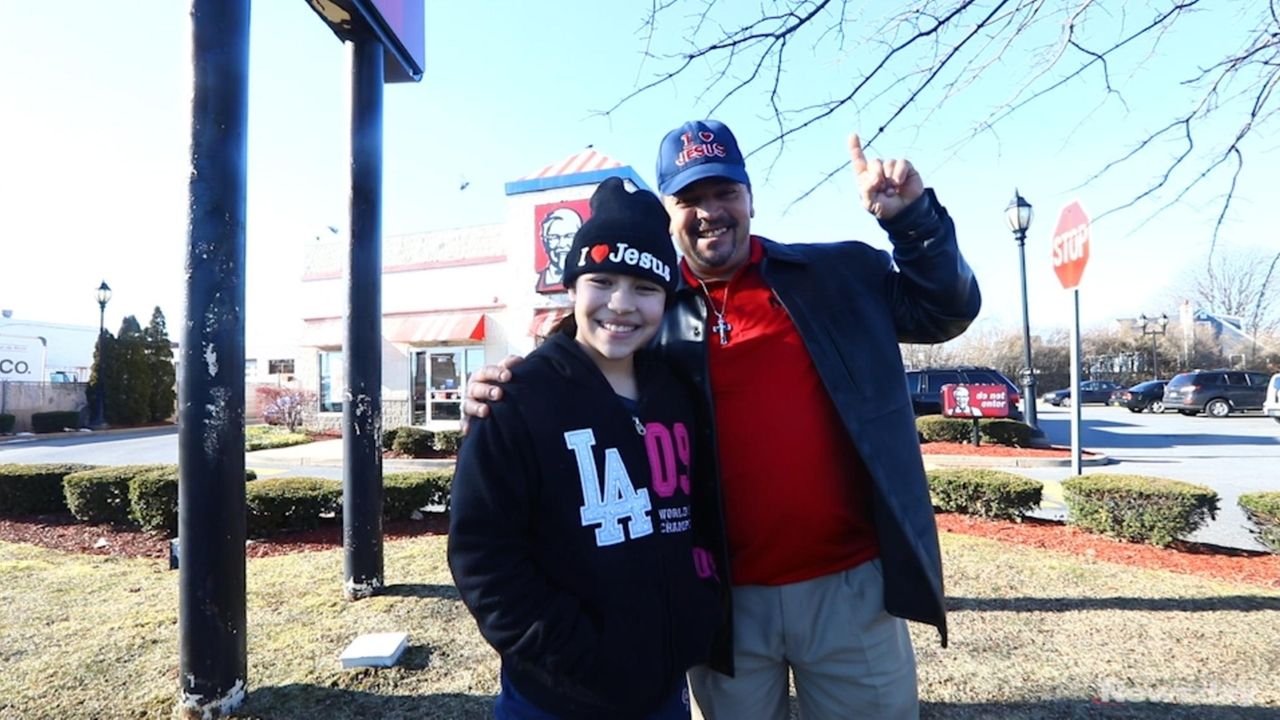 Lydia Pacheco, 11, of Copiague, was inspired by her faith to feed the homeless. Every Sunday, her father, Jose, takes her to KFC, where they purchase five or six "five-dollar fill ups," meals that include fried chicken, a biscuit, side of mashed potatoes, a cookie and a drink, which they deliver to the needy in Wyandanch. Father and daughter delivered meals on Sunday, March 19, 2017. Credit: Newsday / Jeffrey Basinger

When Lydia Pacheco, 11, received birthday money in July, she wanted to use it to feed the homeless instead of spending it on herself.

So she and her father purchased several $5 meals — consisting of fried chicken, a biscuit, a side of mashed potatoes, a cookie and a drink — from a KFC restaurant off Sunrise Highway in Copiague. After the meals were loaded into her dad’s car, the two traveled to Wyandanch to hand-deliver the food to the area’s needy.

Now it’s a weekly ritual they look forward to every Sunday.

“I had money from my birthday and something just told me to go feed the homeless,” Lydia, of Copiague, said. “I told my dad, ‘Why don’t we buy some [KFC] $5 fill-ups?’ ”

“When she asked me she just had this glow in her. I mean you can’t say no to something like that, right?” Pacheco said.

On subsequent Sundays, Lydia first purchased the meals with what was left of the $80 she received for her birthday, then with help from her father and now with small donations the Pachecos receive from their church, Freedom Chapel in Amityville.

Lydia calls the campaign Feed the Need. She hands out between five and 10 meals a week, her father said.

Once a month, the church gives change collected in the donation basket — typically about $30 — to Lydia’s cause, according to Freedom Chapel Pastor Jimmy Jack. Parishioners have also given her blankets and small meals of chicken and rice to hand out.

“When Lydia and her dad told me about it, I was just so inspired,” Jack said. “We teach this all the time, to give and keep giving, and she gets it.”

A KFC spokeswoman said the company “admires her hard work and passion for fighting hunger” and has since offered Lydia gift cards to use at their restaurants.

Last Sunday, after attending a church service, the Pachecos collected dinners and made the short trip north up Straight Path. Pacheco drove slowly in his Hyundai Elantra, which sports a Copiague Middle School honor roll sticker on its bumper and a miniature American flag behind the back seat.

Pacheco stopped his car as he recognized a man they have given food to before.

“You always look out for me,” the man, who gave his name as Eemetrius Williams, said as he took the bag. “God bless you both.”

Lydia said she hopes her efforts inspire others to spread kindness.

“I just get this feeling of joy,” she said.

Trump's legal troubles grow even though he's out of office
Fighting COVID-19: How medical experts have faced the virus
How to get a COVID-19 vaccine appointment
Four challengers taken off Babylon Village ballots
5:01 Counties add fair housing staff, but no testing program
1:42 Transition to high school more troublesome because of COVID-19
Didn’t find what you were looking for?