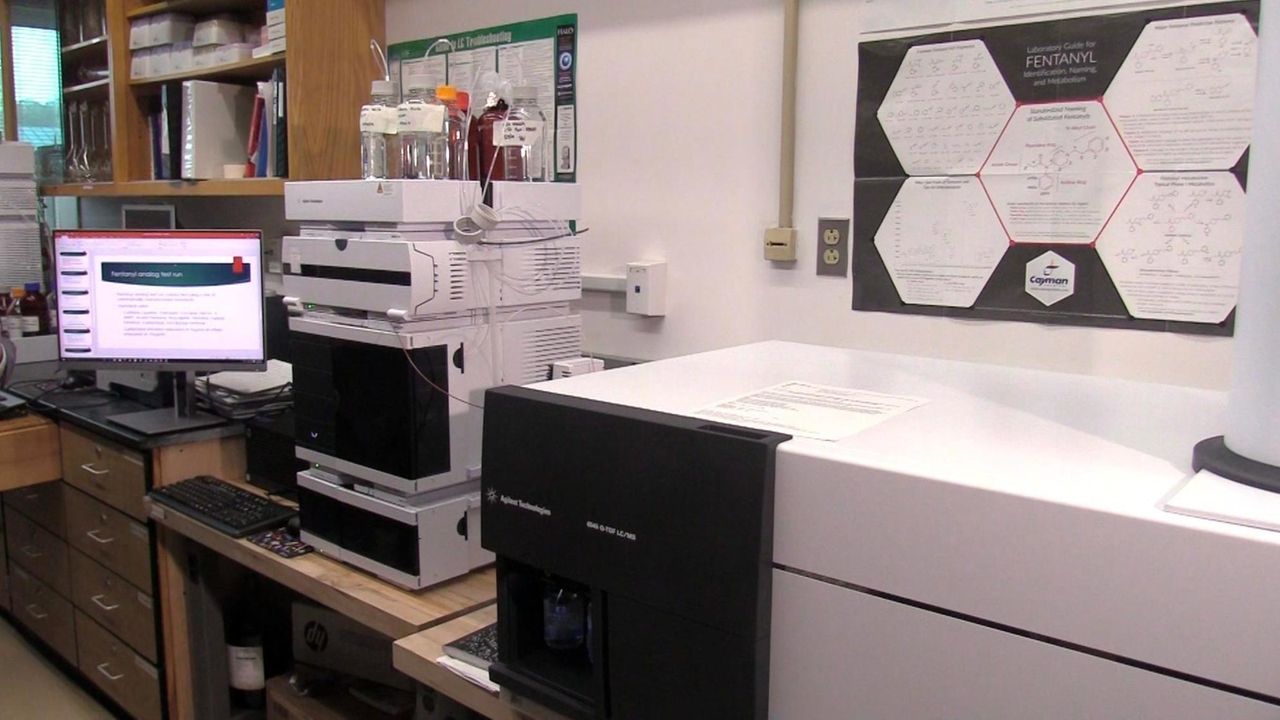 Suffolk County officials showed off their newest tool in the battle against opioids Tuesday, a $400,000 device to help authorities in prosecutions by analyzing and identifying previously undetectable deadly substances.

“With the unveiling of this new technology, we will be able to hold more drug dealers accountable,” said Suffolk District Attorney Timothy Sini at a Hauppauge news conference. “It is critically important to have the technology to essentially decipher the molecular compounds so that we know what we are dealing with,” Sini said.

The county crime laboratory is now the only law enforcement facility in New York State besides Manhattan's Drug Enforcement Administration lab to have such technology, Sini said Tuesday at the Suffolk medical examiner’s office.

Suffolk Medical Examiner Michael Caplan said authorities appear to be making progress in the opioid crisis that has claimed thousands of lives on Long Island since 2010. According to projections by the medical examiner’s office, 235 people in Suffolk died from overdoses this year through Sept. 30, compared with 436 projected deaths in 2017.

“It is a significant drop but this problem has not disappeared by any means,” Caplan said. “We’re still seeing an average of one death a day.”

The device, known as a quadrupole time-of-flight mass spectrometer, measures the response of ions exposed to an electrical field. That analysis allows law enforcement officials to identify the molecules involved so they can pick out substances. These could include drug analogs that are similar to — but not identical to — fentanyl, a synthetic opioid 50 to 100 times more powerful than morphine and other often-fatal substances, the National Institute of Health has said

Sini said the mass spectrometer will also help identify precursors, the ingredients that could be used to make illicit drugs.

“That is critical because often times you see a very small amount of a precursor in a package of drugs,” Sini said. "Without the appropriate technology, we are unable to prosecute that case."

“As we continue to turn the corner on the opioid epidemic, with the lowest number of fatal overdoses in years, it is critical that we not slow down,” Bellone said. “Today, we are stepping up our efforts to end this epidemic once and for all.”

Officials said the funds for the mass spectrometer came from assets seized from drug dealers.

Mass spectrometers help researchers determine the molecular structure of complex chemical substances and have been used to analyze everything from ancient fossils to soil from Mars to designer drugs. The World Anti-Doping Agency and other agencies that battle performance-enhancing drugs in sports use mass spectrometers to screen athletes’ urine for steroids. It is also an important tool for criminal investigators, as well as environmental researchers, archaeologists and other scientists.

Sini said fentanyl manufacturers based in China are tweaking molecules in the drug to evade detection.

The district attorney said Suffolk law-enforcement officials will share the technology with their local and federal partners, an arrangement that will lead to more drug prosecutions. Some illicit drug precursors are illegal in New York State, Sini said. Others precursors are banned by federal law.

"Even if we pick up a substance that is not banned by New York State penal law, by identifying the precise molecular structure we can work with our federal partners,” Sini said.

Suffolk County Medical Examiner Michael Caplan said Tuesday that fatal opioid overdoses in Suffolk have declined in recent years, although those numbers are projections because not every case has been fully analyzed.