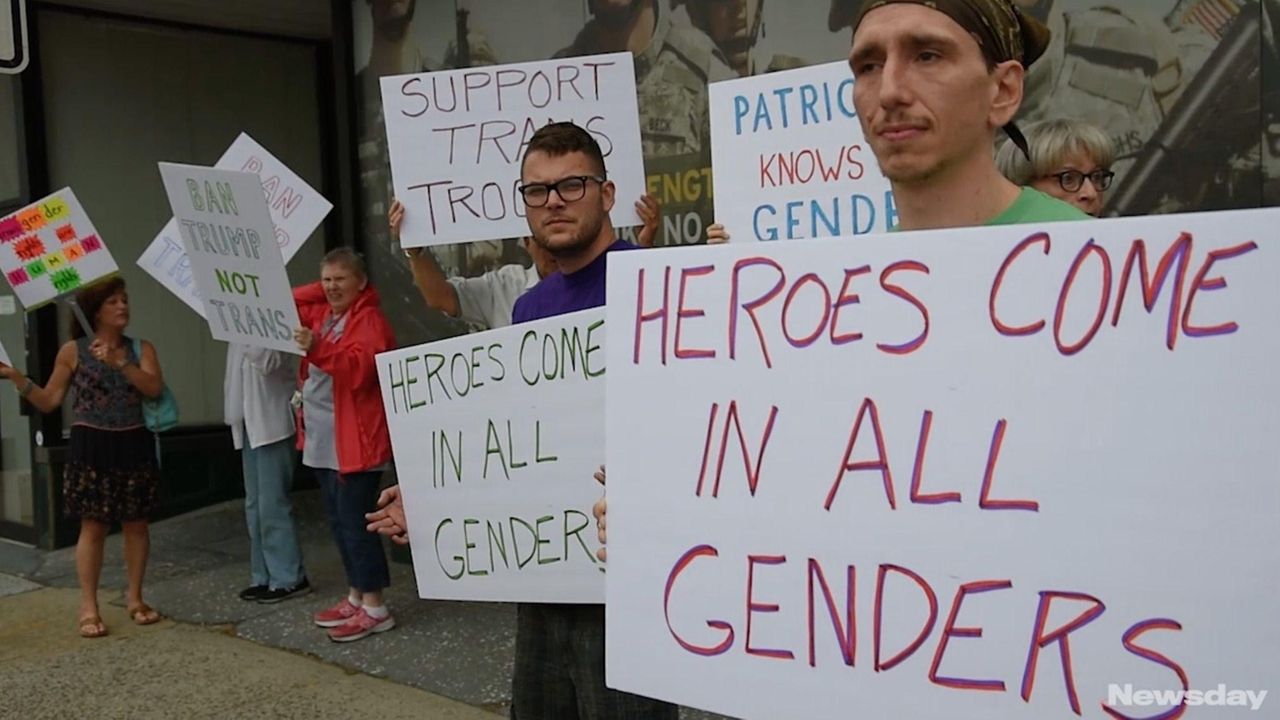 Activists and supporters came together Thursday outside a U.S. Army recruiting station in Smithtown to condemn President Donald Trump’s call to ban transgender people from serving openly in the military.

The nearly 20 people who had joined the protest by early evening held up signs that read “HEROES COME IN ALL GENDERS” and repeated chants such as “Support trans troops!” and “Ban Trump, not trans!”

The demonstration came ahead of the president’s scheduled visit to Brentwood on Friday as transgender advocates worried what actions would follow Trump’s statements. Many active-duty military members have been in the process of declaring their transgender identity after a 2016 policy change under former President Barack Obama allowed them to do so.

“The first thing I’m most concerned about is the transgender troops who have now come out in this period of time where they could openly serve,” said Juli Grey-Owens, executive director of the Long Island Transgender Advocacy Coalition.

Trump in tweets: No transgender troops in U.S. military

“We consistently see from this administration a chipping away of whatever gains we have been able to gather,” Grey-Owens added, making it “more difficult” to live as a transgender person.

Trump signaled a policy reversal was coming from his administration when he tweeted on Wednesday that “the United States government will not accept or allow Transgender individuals to serve in any capacity in the U.S. military,” citing what he called “the tremendous medical costs and disruption that transgender in the military would entail.”

Transgender people have served openly in the U.S. Armed Forces since 2016 and many were in transition to specify their gender identification in the Pentagon’s personnel system before Trump’s announcement.

A 2016 Rand Corp. study estimated that of 1.3 million active U.S. military members, between 1,320 and 6,630 were transgender. Additional health care costs related to transgender military personnel — including hormone treatments and gender-transition-related surgeries — could range from $2.4 million to $8.4 million, representing an 0.13 percent increase in the $6.2 billion military health care budget, according to that study. The analysis concluded transgender service members would have a minimal impact on military readiness and health care costs.

It wasn’t clear how, when or if the Trump administration would follow up his announcement with specific guidance on what changes would take place. A memorandum Thursday from a top military leader indicated the policy on accepting transgender people remains unchanged until Defense Secretary Jim Mattis receives direction from the White House to change it. A memo to all military service chiefs, commanders and enlisted military leaders from Gen. Joseph Dunford, chairman of the Joint Chiefs of Staff, said “there will be no modifications” to current policy for now.

Despite that, Trump’s tweets were seen as a threat to the hard-fought rights of transgender people and their allies in the larger LGBT community, and many supporters of transgender service members repudiated the president’s stance Wednesday and again on Thursday. They were joined by politicians and military leaders who oppose banning transgender personnel.

The president enjoyed support from some sectors, however, including the Christian lobbying group New Yorkers for Constitutional Freedoms, which said Wednesday that “military policy should be guided by the national security interests of the United States, not by left-wing social experiments.”

In Smithtown, some drivers honked in support of protesters, but Commack resident Al Levy stood to the side, watching skeptically.

“Unfortunately, today everything is political,” said Levy, 77, who says he is a Trump supporter. “I’d like to see some brains in the military make some decisions that they think are best for the troops, and if certain people . . . are best suited in one area rather than another, that should be spelled out.”

But to Barbara, 71, a transgender woman who served in the U.S. Air Force as a man in the 1960s and lives in Suffolk County, the matter should be simpler. She did not give her last name because some of her family members do not accept her gender identity.

“In reality,” said Barbara, “all the military should be concerned about is, ‘Can you do your job?’ ”