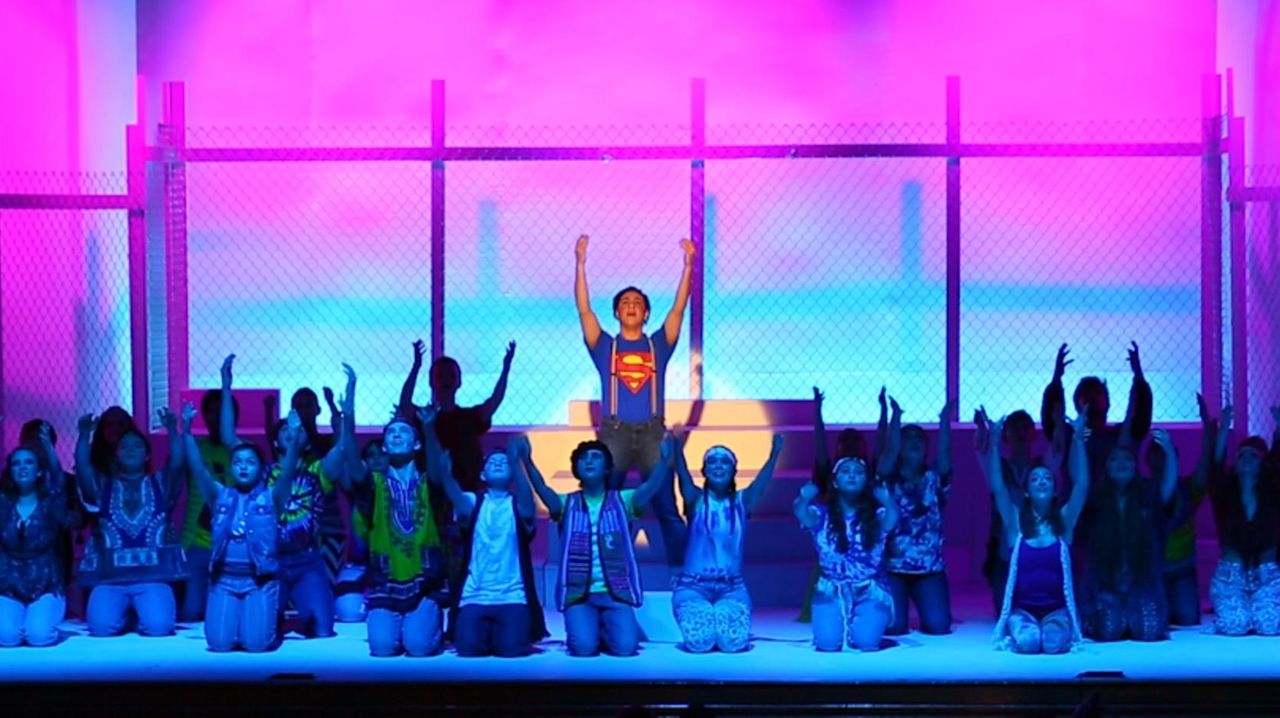 Mount Sinai High School student Alex Bacaris plays the lead of Jesus in the school's rendition of the play "Godspell." The play's faculty director, David Kramer, said Bacaris being a transgender male "was never a factor" in choosing him to play the lead role. Kramer said the student "is a wonderful fit for the show in that he had all the aspects of a triple threat. He could dance and follow the movement, he had a great voice and he certainly can act."  Credit: Newsday / Chris Ware

When Alex Bacaris of Mount Sinai first won a role in his high school’s annual musical three years ago as a sophomore, his director had no idea that not long before, Alex had been Alexis.

And it wasn’t an issue when Bacaris, now an 18-year-old senior, won the role of Jesus in this spring’s school production of the musical, “Godspell.”

Bacaris, who seems completely at home as he darts and dances across the stage, said performing is his passion and what he would do regardless of his gender. He said he is willing to talk about his experiences because he hopes he can be an inspiration.

“Being known is the only way to get your message out to other people,” said Bacaris, sitting in a living room filled with family photos showing him as he is and as the long-haired girl nicknamed Lexie he used to be.

“I just want other trans kids to know that no matter who they are, this will not hold them back unless they let it,” he said. “I want to inspire confidence and passion in them to do what they want in their life while being who they truly are.”

Performing in “Godspell” — a musical depicting Jesus’ life and teachings with humor and poignancy — was another opportunity to do what “I absolutely love and adore,” Bacaris said. But the show, received with enthusiastic applause during a three-night run, took on additional meaning: “I feel like it resonated in a sense,” he said. “It’s a show about community-building and has such a power to it.”

Bacaris’ transition from Alexis to Alex had its share of confusion and pain, as he tells it, but he said he has found acceptance not only onstage but in his family, his friendships and in his school.

The environment at Mount Sinai High School isn’t typical, said David Kilmnick, chief executive officer of the LGBT Network, which includes LI Gay and Lesbian Youth, a service and advocacy organization. “While some things are improving, we still see many incidents of verbal harassment, physical harassment and bullying,” he said, speaking in general. “Students who are out and proud serve as great role models for others.”

Bacaris said from a young age, he gravitated toward toys geared toward boys. As soon as he was able to pick out his own Halloween costumes, he became Spider-Man and Harry Potter instead of Minnie Mouse or a Disney princess. He played with Hot Wheels cars instead of Barbies, and his parents, Theresa and Patrick, were fine with it, he said.

“I just had a different perception of the world than anybody and never had a stereotypical girl view of the world,” he said. With puberty, however, the look in his eyes grew darker, and the exuberant, bubbly kid turned inward, said his parents, and his sister Katiana, 22.

“You kept to yourself,” she said. “I thought maybe you were gay and would tell us in your own time.”

“I could see he was always holding back something,” Kelly said. “It plagued me, I grew really concerned. I could always read his eyes very well.”

At the end of ninth grade, Bacaris and his mother were in a car, he recalls, when he asked if she had ever felt trapped in the wrong body. She defined the concept of transgender, and he replied, that sounded about right.

By now, Bacaris’ parents have long gotten over the initial shock and fear for his future in a “world that can be very cruel,” said his father Patrick, an accountant. “I realized no matter his gender identity, this is my kid and he’s a damn good kid.”

Their love for him, his mother said, is “unconditional.”

Now, his sister said to him, “The light shines in your eyes again.”

Bacaris said he has known five other students, including two who have graduated, who are “gender nonconforming or transitioning like me.” Not all of them have had the same support he has had at home, he said.

At school, however, their emergence has been uncontroversial. Principal Robert Grable established a gender-neutral bathroom and changing area after meeting with Bacaris and other students two years ago, and Bacaris said he has encountered neither bullying nor negativity during his transition. “The school has been very, very good with it,” he said.

Nationally, surveys that show rising familiarity and acceptance of transgender people also reveal that many still face a lack of support in their own families, and are at risk of violent hate crimes.

While the question of bathroom use was settled without controversy at Mount Sinai, it has proved a point of friction nationwide. The March 30 compromise to North Carolina’s much debated HB2 law — the so-called Bathroom Bill — ended sporting events’ boycott of the state, but is itself controversial.

It lifted the requirement that transgender people use the bathroom corresponding to the sex on their birth certificate, but kept in place, at least until 2020, a ban on localities extending anti-discrimination laws beyond state law to cover the LGBT community. That still leaves LGBT people in the state with little recourse against discrimination in the workplace, housing or elsewhere, since most protections for the LGBT community come at the state and local level.

Congress has failed to pass such protections, and former President Barack Obama’s executive orders protecting transgender people are vulnerable to reversals. In addition, the U.S. Supreme Court, which legalized marriage equality for gay people and lesbians, has yet to decide on whether LGBT people are covered by the bar against sex discrimination in Title VII of the Civil Rights Act of 1964.

In February, the new Trump administration withdrew Obama-era guidance to schools receiving federal funds directing them to allow transgender students’ use of school bathrooms and changing areas according to their gender identity rather than the gender on their birth certificate.

New York State officials denounced that decision and said denying these students access to “facilities or programing” consistent with their gender identity could amount to sex discrimination under federal law.

Principal Grable said that when Barcaris and other students came to him to discuss their preferences about what name they wished to be called and which bathrooms they wished to use, “they listened to my concerns and I listened to theirs and we came up with a happy medium,” Grable said. “I told [them] what I needed so this wouldn’t be a distraction and we moved on.”

The compromise was the gender-neutral bathroom and changing areas. Bacaris said he has begun to use the boys’ bathrooms as well without problems.

If there had been a reaction to the emergence of transgender students at Mount Sinai High School, Grable said, “it wasn’t overt. . . . Everyone is going about their business.”

He said students at the high school, which has 793 students, have been together since grade school, and “they know each other very well. I think they understand each other.” That is true for Bacaris, who said his friends, whom he has known since moving to the district in fifth grade, accepted and supported him.

His mother, Theresa, said that when Bacaris began to transition, she took him to a salon to have his long hair cut. The stylist told her she could feel the tension leaving his body as the hair came off. “Finally,” Bacaris said he thought to himself, looking in the mirror. “I saw the beginnings of a future.”

Bacaris said that after graduation, he will perform in the school’s summer theater program and in the ensemble of Kramer’s community theater production. Then he will take acting classes, audition for commercials and maybe go to college eventually.

“I just want to perform and inspire people and do what I love,” he said. “My strong belief is whatever is meant to happen will happen.”