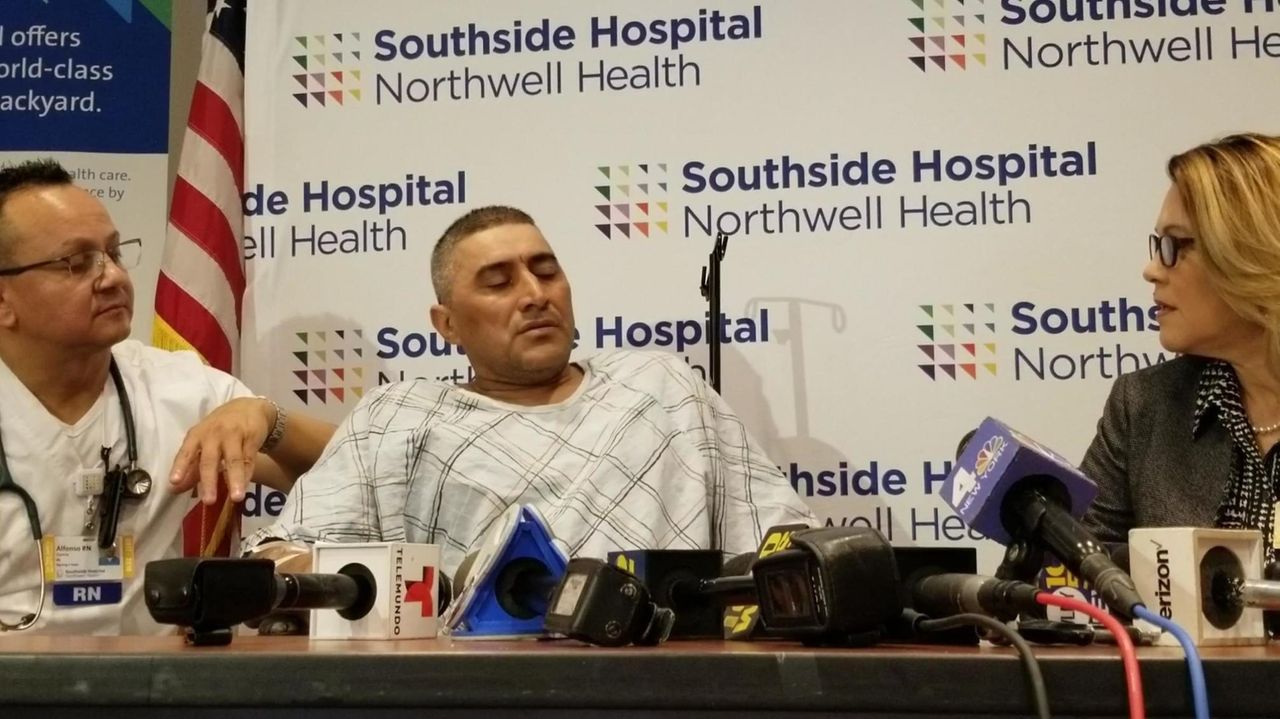 Jose Campos, 48, of Bay Shore, was struck by lightning on Monday as he was working on a forklift outside Roman Stone Construction Co. On Tuesday, Campos described the terrifying incident, and his gratitude to God for surviving, during a news conference at Southside Hospital in Bay Shore. Credit: James Carbone

Jose Campos saw the lightning bolt strike and snake across the ground, coming right at him.

It was 10 a.m. Monday and he had just gotten off a forklift outside Roman Stone Construction Co. in Bay Shore. It was raining and he heard thunder. He was handling metal cable.

The lightning struck about 20 feet away from him. Then he hit the ground.

Campos, 48, a husband and father of two from Central Islip, now counts himself among the lucky people who’ve absorbed a lightning bolt and survived to tell about it. He described the terrifying incident, and his gratitude to God for surviving, during a news conference Tuesday at Southside Hospital in Bay Shore.

About 20 minutes after he dropped, Campos came to his senses but couldn’t get up. He felt stuck to the ground.

His heart beating hard and fast, he pushed himself and started crawling to the company building, about 150 feet away.

“I didn’t feel my legs,” he recalled, speaking through an interpreter. “My whole body felt numb.”

He struggled to get to his feet, and did. His entire body was shaking, especially his legs, and he felt as if his organs were shutting down.

He thought he was going to die.

“When I got into the ambulance, all I felt was a lot of tingling, all over,” Campos said.

“I do believe it changed me,” he added. “I feel grateful to God.”

After all that, he was alert and addressing the media Tuesday morning.

Doctors said he was lucky. He suffered virtually no injuries. Most people directly struck by lightning don’t survive. But Campos didn’t suffer a direct hit, which probably accounts for his being alive, said Dr. Michael Grossman, Southside’s trauma surgery chief.

His shoulders and legs still hurt, said Campos, speaking from a wheelchair and with intravenous ports in his arm.

The great majority of people survive when they suffer this kind of tangential contact with lightning, the doctors said. But it can still kill.

Campos’ wife and daughter initially thought he was killed by the lightning strike, he said.

Officials from his company said Monday that Campos was told to come inside because of the weather. Campos said Tuesday that didn’t happen.

Campos still sounds weak and deeply upset by what he’s gone through. Doctors worry about the possibility of depression and post-traumatic stress.

Telling his story, he struggled to hold back tears, and the doctors say he keeps telling the story again and again.