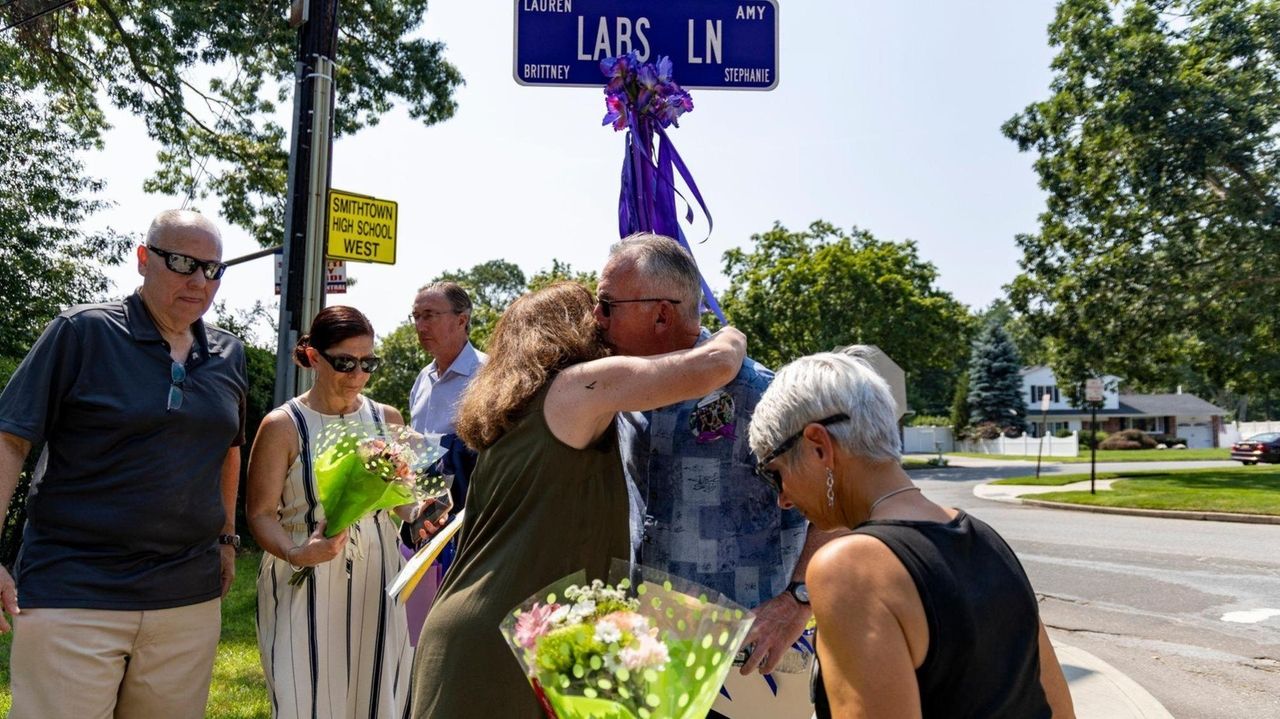 Families and friends gathered Saturday in Smithtown to remember the four young women killed and the four others injured in the July 18, 2015 Cutchogue limo crash. State Sen. Jim Gaughran (D-Northport) presented copies of the limo safety bills he sponsored, which were signed into law in February 2020, to the victims' families.  Credit: Howard Schnapp

One day before the sixth anniversary of a fatal 2015 limousine crash in Cutchogue that killed four women and injured four other women, the families of the victims somberly gathered Saturday in Smithtown for a memorial service while also celebrating the passage of state legislation designed to improve safety within the limo industry.

The families stood in front of LABS Lane, a quiet Smithtown street rededicated to Lauren Baruch, 24, and Brittney Schulman, 23, both of Smithtown; Amy Grabina, 23, of Commack; and Stephanie Belli, 23, of Kings Park. The four women died on July 18, 2015, while touring wineries on the North Fork, when their limousine was struck by a pickup truck after their limo driver made a U-turn on Route 48, according to authorities. Four other women inside the limo were injured.

Nancy DiMonte of East Northport, whose daughter Joelle DiMonte survived the crash, said Saturday was "a very bittersweet day" for the families as they were presented copies of the signed laws that enacted key safety measures for limos.

"Six years, four fallen angels, four injured souls, eight distressed families, zero justice. And we received justice in legislation because New York State has now the most comprehensive safety package in the entire country, which is now down in Washington for approval nationwide," DiMonte said.

The limo driver, Carlos Pino, 59, of Old Bethpage, was arrested and faced multiple charges related to the crash, but a Suffolk judge in October 2016 threw out the indictment charging Pino with the deaths of the women.

Since that time, the Cutchogue crash and a 2018 collision in upstate Schoharie County that killed 20 people caused a push on the state level to enact legislation focused on enforcing safety within the limousine industry.

The legislative bills, both signed by Gov. Andrew M. Cuomo on Feb. 3 last year, require limousines to use commercial GPS devices and increase the penalties for limousine drivers who make illegal U-turns.

The families were joined by State Sen. James Gaughran (D-Northport), who sponsored the legislation, and Smithtown Town Supervisor Ed Wehrheim.

Nancy DiMonte told Newsday after the service that the families put in "blood, sweat and tears" through the years to pass legislation, and the Schoharie crash motivated them to keep fighting, even though she said limo industry lobbyists fought hard against parts of the legislation behind the scenes.

"[The Schoharie crash] pushed us a lot. We can’t lose all these lives and think nobody is responsible for it," said DiMonte, whose daughter has since had multiple surgeries and will probably need lifetime care.

Paul Schulman, whose daughter Brittney died in the Cutchogue crash, said a permanent memorial will be placed at the crash site. Schulman, who started a petition in 2017 pushing for limo reforms, thanked local officials who offered their help with the street dedication and a memorial for the women.

"We are so indebted to these people, and it’s unbelievable that we’ve had the privilege not only to meet you, but to be friends with all of you," Schulman said.

Steve Baruch of Smithtown, whose daughter Lauren died in the crash, said after the service that the families try to keep the memories of the women alive through various activities such as the annual "Running 4 Our Angels" 5 kilometer run/walk fundraiser in Smithtown.

"It is bittersweet. The hurt doesn’t ever go away, but it’s how we deal with it and we try to be as positive as we can be," Baruch said.

2:29
Workforce, middle-class homebuyers shut out on Shelter Island
If you see it, kill it: Why this pretty bug has experts sounding alarms
What happened to Gabby Petito? Key developments in the missing person's case
2:10
Fiance of missing Long Island woman goes missing too, police say
Low COVID-19 positivity rates stir cautious optimism on LI college campuses
GOP moves to ban Nassau mailers during election season
Didn’t find what you were looking for?