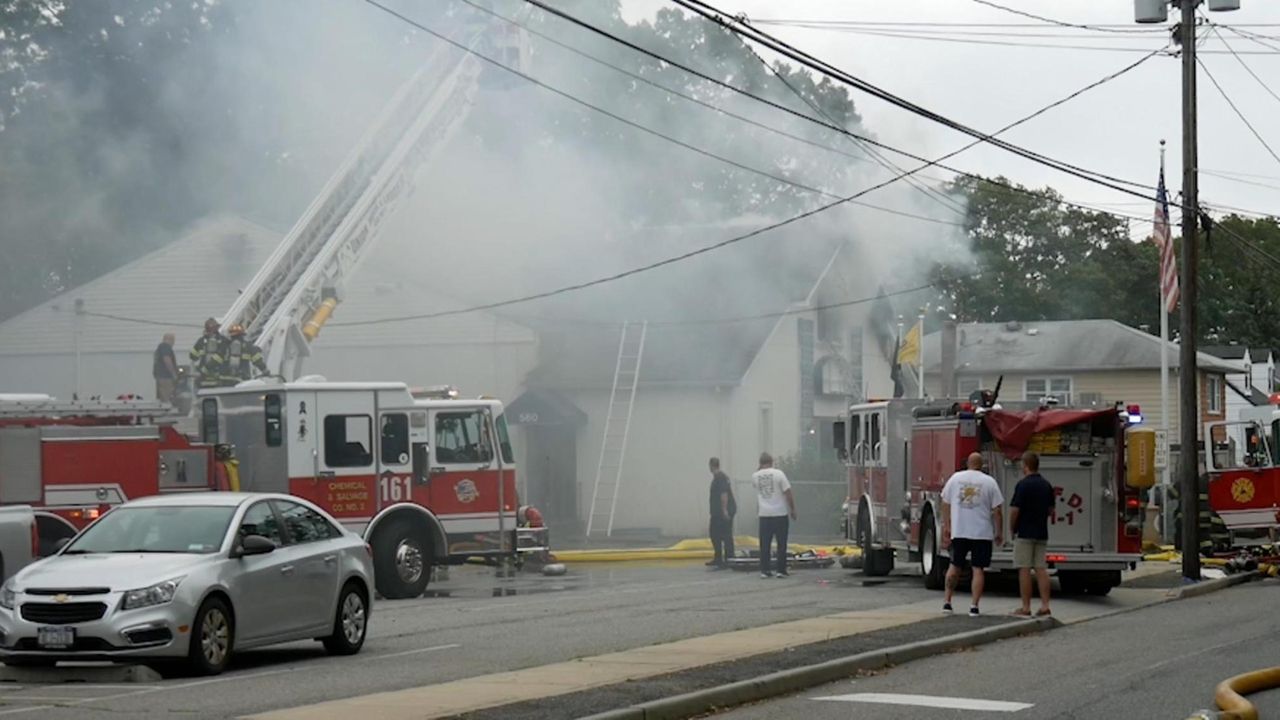 A couple of vets were cooking breakfast at the Lindenhurst Veterans of Foreign Wars post Wednesday morning when a neighbor screamed that the roof was on fire on the other end of the building.

It turned into a blaze that injured four firefighters and destroyed the recently renovated building and decades of historical memorabilia.

VFW members Richard Tibbetts and Phil Pane said they were inside the building making breakfast at the southern end when the neighbor pointed out the blaze. The men fled unharmed as fire departments and rescue crews arrived.

“It looks like we are out of business,” Tibbetts, the past commander and current vice president, said as he surveyed the damage.

Tibbetts said many trophies, artifacts, books and memorabilia were destroyed, although firefighters were able to rescue a handful of flags, medals and photos.

“These things are priceless,” Tibbetts said. “But the important thing is everyone is safe.”

The fire caused extensive damage to the roof, walls, windows and the building’s interior. The post had recently undergone a renovation, replacing the floor, dining room and kitchen appliances, officials said.

“It’s heartbreaking,” Pane said. “We are all brothers. We all have different fathers but we have same uncle — Uncle Sam. Everyone is saddened by this.”

Lindenhurst Fire Chief of Department Craig Santoli said the blaze was extinguished in 30 to 45 minutes. "They had to back out and re-evaluate" after seeing the initial fire, he said. "We did an outside blitz attack, knocked it down and were able to go back in and finish the cleanup."

Santoli said two of his members were taken to Good Samaritan Hospital Medical Center in West Islip with injuries after a five-inch water hose ruptured outside the VFW hall. They were undergoing CT scans and X-rays, Santoli said.

“The injuries were non-life-threatening,” Santoli said. “They were alert, conscious and speaking.”

Another two firefighters were at the hospital being treated for heat exhaustion, he said.

The cause of the fire is under investigation by the fire marshals from the Town of Babylon and the Village of Lindenhurst, officials said.

Lindenhurst Mayor Michael Lavorata said the VFW hall will be rebuilt, no matter the cost.

“The Lindenhurst community bands together all the time,” Lavorata said. “These guys are our family.. Without these brave men and women who served for us, we wouldn't have a democracy. … There is no doubt in my mind that this building will be rebuilt. The community will do whatever it takes to get it done. These men and women have earned that."