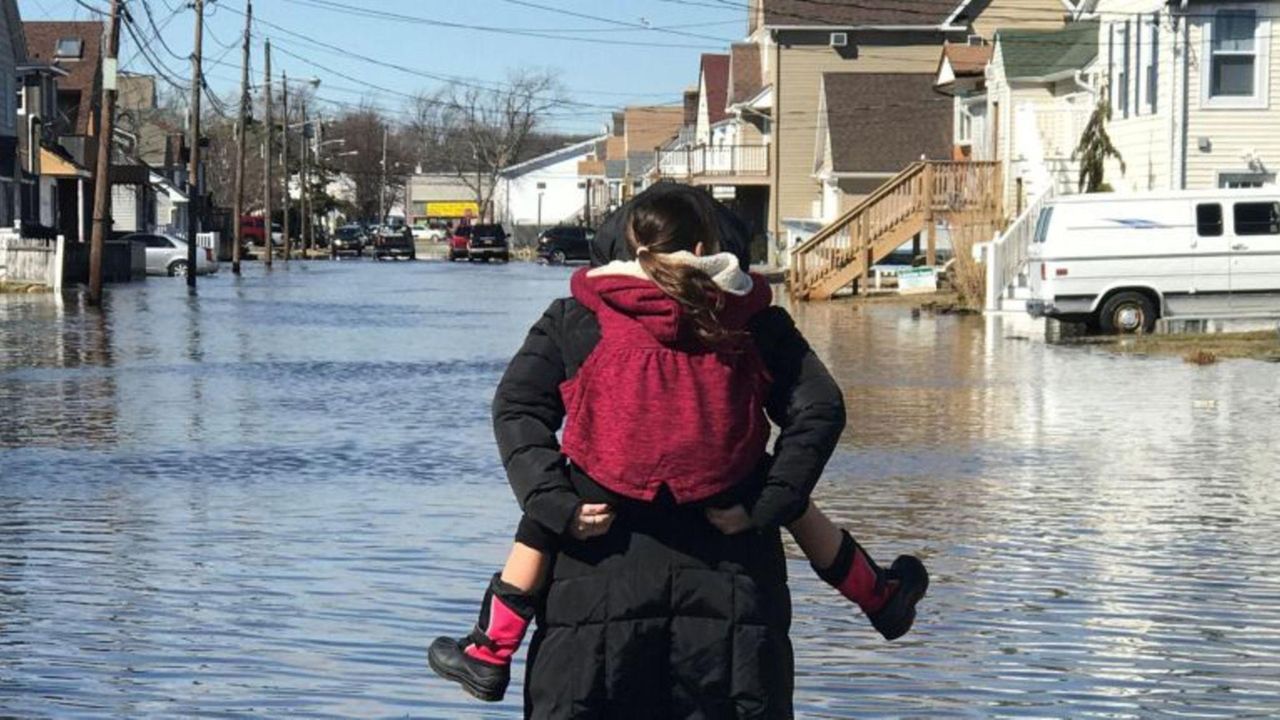 Rick Sorrentino, superintendent of the Lindenhurst Department of Public Works, demonstrated on Thursday the new check valves the town has installed — backflow prevention devices designed to allow water to flow out but not back into streets. Credit: Michael Owens

There are days when the water gets so high that Angela Hojnacki has to carry her young daughters on her back to reach her truck, which she parks on dry land a quarter of a mile away from her house in Lindenhurst.

Sean Esna says he sometimes misses work because his sedan can't get down his flooded street.

These are the adjustments to daily life that residents in Lindenhurst and other South Shore communities have had to make after years of chronic street flooding -- even living several blocks north of the Great South Bay. Some are so fed up, they say they may even take legal action.

“It’s more than weekly at this point,” Hojnacki said of the flooding, which at times prevents the school bus used by her daughter, who is on the autism spectrum, from coming down their block on South Ninth Street. “What if we had a medical emergency? How is an ambulance going to get through?”

To address flooding, Lindenhurst, like most municipalities, has installed check valves — backflow prevention devices designed to allow water to flow out but not back into streets.

But officials are now realizing the limitations of check valves and looking to new options.

Zitani said communities near the bay were developed on filled wetlands and with rising tides, more intense rainfall events and bay water that has climbed 8 inches since 1960, some neighborhoods are barely a foot above sea level. He said officials have “limited options” in trying to stem flooding.

Check valves can become ineffective when debris gets into them and when hit with the double whammy of a high tide and large rainfall, they will not be able to keep water from pooling in the street, officials said. Residents complain that municipalities don't clean the street basins often enough, leading to a buildup of debris that makes the devices useless.

Check valves are favored due to their relatively inexpensive pricetag compared to other options. Raising a roadway can cost millions of dollars for a small section, whereas check valves run as little as $1,500 each, said Rick Sorrentino, Lindenhurst’s Superintendent of Public Works.

“It’s the cheapest and certainly the easiest fix for us and I don’t really see another way out,” he said.

Manufacturers have been racing the last few years to try and improve on check valve technology, officials said.

“Whoever invents the most successful one will be the next Bill Gates,” Zitani said. “Nationwide, every highway department is waiting for a very dependable one.”

This year Lindenhurst began installing check valves at locations prioritized in a 2017 drainage study that identified $60 million in potential flood fixes. The village has put in a dozen valves with about 30 more planned for a total cost of between $63,000 and $105,000 in village funding, officials said. Two more valve locations are being planned using federal superstorm Sandy money.

But Sorrentino said that as they inspect the basins, they are finding metal pipes that have corroded and have to be replaced or pipes that are just gone, resulting in more work.

“Street by street we’re correcting all the mistakes that were made,” he said. “It was poor planning and bad oversight.”

Now Lindenhurst is trying a new approach: installing electric pumps in basins to pump out any pooling water.

The village will divert some of the Sandy money for a pump on South Sixth Street in the spring. Pumps, including wiring and installation can cost as much as $100,000, Sorrentino said. He said the village will wait to see how the pump works before committing to more locations.

“It’s a bad situation and people are impatient and I don’t blame them,” he said. “But we’re trying hard to correct things.”

The village decided to try a pump after talking with Freeport Village Mayor Robert Kennedy, who said he has installed pumps at eight locations so far, with plans for more in the coming weeks at a total cost of about $1 million. He said the pumps have been successful, taking over during conditions when check valves don’t work by pumping out water when it reaches a certain level.

Kennedy said municipalities looking to address street flooding also have to tackle the issue of deficient bulkheading on private property. He said Freeport has begun enforcing a law  it has had on the books for several years that requires property owners to repair their bulkheading or else the village will fix it and place the cost on their tax bill.

Residents said they are tired of having to wait for a fix. They say flooding has gone from inches to feet in recent years.

“It doesn’t even have to be high tide . . . it goes from nothing to two feet of water in the middle of the street in under 20 minutes,” Sean Esna, who lives on South Eighth Street, told the Lindenhurst board of trustees.

Esna was one of about a dozen residents who showed up to a recent Lindenhurst board meeting to ask officials for help with flooding. Many raised their homes after Sandy, investing thousands of dollars into their properties, only to have corrosive salt water lapping at their vehicles and disrupting their daily lives.

The havoc the chronic flooding has caused may even prompt residents to take legal action. Bob Anastasio, of Lindenhurst, said residents have consulted with an attorney who said the situation “is an excellent class action suit waiting to be filed.”

Anastasio isn’t the first town resident to mention a lawsuit. Bill Walters, who lives in Babylon, told the town earlier this year that a class-action lawsuit may be in the works because the situation has become a “huge safety issue” that the town “is refusing to fix.”

Hojnacki, who keeps a tide table app on her phone and a pair of rain boots with her at all times, said residents are tired of having to plead for help.

"I don't think they understand what we deal with," she said. "We're all going to end up leaving, that's how bad it is."