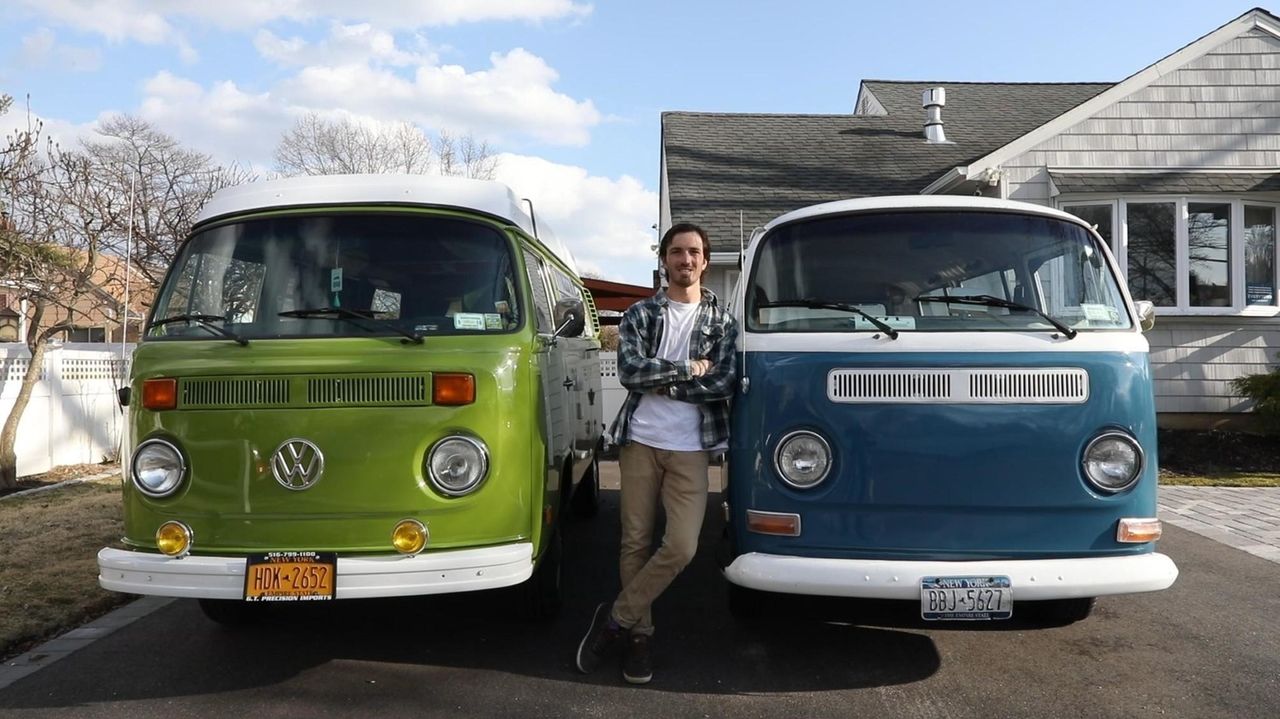 Lindenhurst's Kyle Cropsey was just 16 when he first laid eyes on his dream car -- a 1971 Volkswagen bus. He scribbled a note and slipped it through an open window, asking the owners to give him a call if they ever wanted to sell. He took a photo in front of the bus, which he'd later post on his Facebook page, with the caption, "My future car." Eight years later, that same Volkswagen he coveted as a teenager became his. On Tuesday, Cropsey talked about how he finally got his dream car. Credit: Newsday / Chris Ware

This is a story about Matilda and the two men who loved her.

Kyle Cropsey was just 16 when he first laid eyes on her, all in blue and alone in a parking lot at Rockaway Beach. But Matilda — a 1971 Volkswagen bus — belonged to another.

Still, Cropsey made his move. He scribbled a note and slipped it through an open window, asking the owners to give him a call if they ever wanted to sell. He took a photo in front of the bus, which he’d later post on his Facebook page, with the caption, “My future car.”

Eight years later, Cropsey, now 23, of Lindenhurst, had never forgotten about Matilda. And on Sunday, that same Volkswagen he coveted as a teenager became his.

Four days earlier, Cropsey received a call from Cris Mead, 51, of Oakland, California. Mead’s father, Cornelius Mead, had purchased the van new and named it Matilda. He lavished attention on her for decades until he died last week at the age of 82.

Mead’s family of five, based in the Upper West Side at the time, traveled the country in that car. They cracked the windows, pulled down the seats and slept on the floor at camping sites from Maine to Utah, Cris Mead said. And Cornelius Mead, a photographer for the Department of Veterans Affairs who eventually settled in Laurelton, Queens, would keep track of “every tank of gas, every oil change,” and scribble it down in a log book, his son said.

“He spent more money on that van than any reasonable person would have,” Cris Mead said. “He couldn’t let it go. He just treasured it.”

Cris Mead was in Queens to settle his father’s affairs, which included cleaning the car, when he found Cropsey’s note tucked into the log book and dialed his number on a whim, wondering if he’d still be interested in buying the car.

Over the years, Cropsey estimates he’s dropped about 20 little notes into Volkswagen vans he’s admired. But when Mead called, Cropsey said he “had a feeling” it was about the van he saw at Rockaway Beach.

“It was fate,” Cropsey said.

Mead said they probably could have sold Matilda for about $1,500 but he and his siblings decided instead to give the car to someone who would care for it just as their father had.

Mead told Cropsey that they’d like to give him the van, on the condition that he’d update them on the restoration process and “go on plenty of adventures.”

“I was just so grateful,” said Cropsey, who teaches English as a New Language at Babylon High School. “It kind of restored my faith in humanity.”

Cropsey went with his father, Robert Cropsey, to pick up the van from its old home on Sunday. As they drove off, Cornelius Mead’s old neighbors called out to them, to “take good care of her,” Robert Cropsey said.

The van now sits in his driveway next to Cropsey’s other vintage van, a 1976 lime green Volkswagen Westfalia that he purchased two years ago and has been refurbishing.

“I told him, I really don’t want these things in the driveway,” said Robert Cropsey, though he eventually relented.

His son’s always had a thing for the Volkswagen bus and collected models of the vehicle as a child, Robert Cropsey said.

Matilda could use a fresh coat of paint, and it’s a mystery how many miles she’s logged because the odometer winds back down to zero once it hits 100,000, Kyle Cropsey said. But otherwise the engine’s running well and the interior’s in good shape. Cropsey is planning to start body work soon.

“It’s wonderful to have my father’s legacy move forward in the world in this small way,” Mead said. “I get a catch in my throat every time I’ve shared this story.”