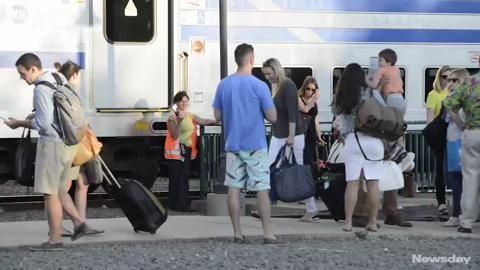 The Long Island Rail Road is asking riders to do their part to reduce crowding on a popular weekend train to the Hamptons and Montauk.

Following a call from the Federal Railroad Administration for the LIRR to reduce the safety risks caused by crowding on its Friday afternoon Cannonball express train, the railroad Thursday began asking customers not to bring oversized luggage on board and to stow all items in overhead racks or under seats.

The LIRR said it also will designate some storage areas on the train for luggage, and that luggage will not be permitted in aisles or doorways.

"We certainly hope that everyone who wants to board the Cannonball can do so," LIRR president Patrick Nowakowski said in a statement. "If our customers leave oversized items at home, more of them will be able to enjoy a ride to the Hamptons in under two hours. We need everyone's cooperation to make this work."

The move comes after a CBS 2 News video captured several Hamptons-bound passengers on a Cannonball train sitting in aisles, on luggage and on the steps connecting the two floors of the double-decker trains.

The Federal Railroad Administration said in a statement that it would work with the LIRR to find a solution to "the problem of overcrowding, which can be a concern as it relates to the ability of people to move from one car to the next in the event of an emergency."

The LIRR operates nine other Friday afternoon trains to Montauk, but riders flock to the Cannonball because of its speed and convenience. The train operates nonstop from Penn Station to Westhampton and also features reserved seating in the first two cars.

The Cannonball became even more popular two years ago when the LIRR changed its origin to Penn Station from the lesser-used Hunterspoint Avenue station in Long Island City.

The LIRR said it cannot add more cars to the train or run additional express trains "because of equipment and scheduling limitations." The LIRR does not have -- and the FRA does not require -- maximum-occupancy limits on its trains.

The LIRR said it will spread its message to customers through its text and email alerts, electronic video and audio announcements at stations, and social media accounts.

The message will read: "All luggage MUST fit in the overhead rack or under the seat. Luggage MUST not block aisles or doors."

The LIRR also began sending alerts to customers Thursday with the scheduled departure times of "alternate trains to [the] Montauk Cannonball."

Montauk line commuter Christopher Bryant, 46, rides one of those alternatives, the 5:09 p.m. out of Penn, every weekday, and said it's not much better.

"Ten trains to Montauk is a lot, but they're all packed," said Bryant, of Sayville.

Bryant, an attorney, applauded the LIRR's efforts to address the crowding but was skeptical that it would make much of a difference. "These trains were clearly not designed for long-distance travelers and travelers with luggage," he said.