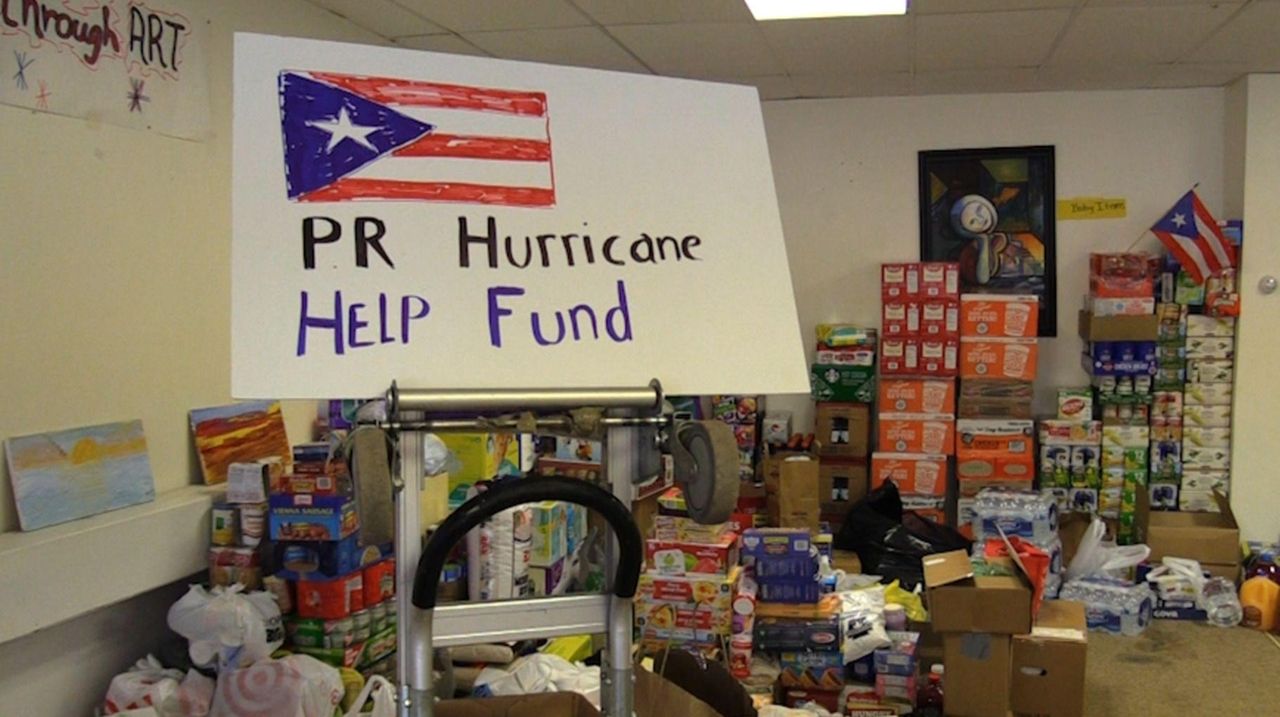 On Tuesday, Sept. 26, 2017, an ad hoc committee in Central Islip organized donations for victims of Hurricane Maria in Puerto Rico. Thousands of volunteers have donated nonperishable food, water, clothing and other essential items to send to the storm-ravaged island. Credit: James Carbone

Puerto Rican volunteers, seeking to help survivors of Hurricane Maria and deeply worried about the Caribbean island’s dire situation, are extending a charity drive to collect donations through the weekend.

About a dozen supporters of the relief effort gathered Tuesday in Central Islip to publicly thank those who have pitched in and to ask more Long Islanders to lend a hand to residents of the United States territory.

Much of Puerto Rico, which has a population of about 3.4 million, was left in ruins when the Category 4 storm hit on Sept. 20 with 155 mph winds. All of the island lost power, and landlines and cellphone communications were severely disrupted.

“The need is going to be there for a long time and we want to continue,” said Renee Ortiz, one of the volunteers with Teatro Yerbabruja, the nonprofit coordinating the relief drive. “These are U.S. citizens who are in desperate need right now and we want to make sure we’re there for them.”

Before the storm struck, Puerto Rico was struggling through a financial crisis, with mounting debt, high unemployment and aging infrastructure.

Long Islanders with Puerto Rican roots said they have spent many sleepless hours worrying and trying to reach relatives and friends.

Benny Torres, an insurance broker in Hampton Bays, said his family here finally heard Monday from a cousin, who was among a grandmother, aunts and uncles in Moca and Aguadilla. All survived the storm, but other news was not comforting.

“When I got news yesterday, I wanted to scream,” Torres added. “It’s a feeling of helplessness.”

Several said they are channeling their anxiety into the volunteer effort, which by Tuesday had raised about $7,000 in monetary donations and another $7,000 worth of goods.

Margarita Espada, the relief effort’s main organizer, said her goal is to coordinate with grass-roots groups in Puerto Rico to deliver the aid directly to people in need.

The collection of donations and items will continue Saturday and Sunday from 9 a.m. to 3 p.m. at Teatro Yerbabruja Arts Center, 63 Carleton Ave. in Central Islip.

Among the needs are nonperishable food, sanitary items, batteries, water, flashlights, small radios, baby and adult diapers, and formula and food for children.

Separately, the Village of Westbury has set up donation boxes at village hall and a few other locations to collect relief items for both Puerto Rico and Mexico, which is recovering from a strong 7.1-magnitude earthquake that struck south of Mexico City on Sept. 19. The death toll from the quake has reached more than 300.