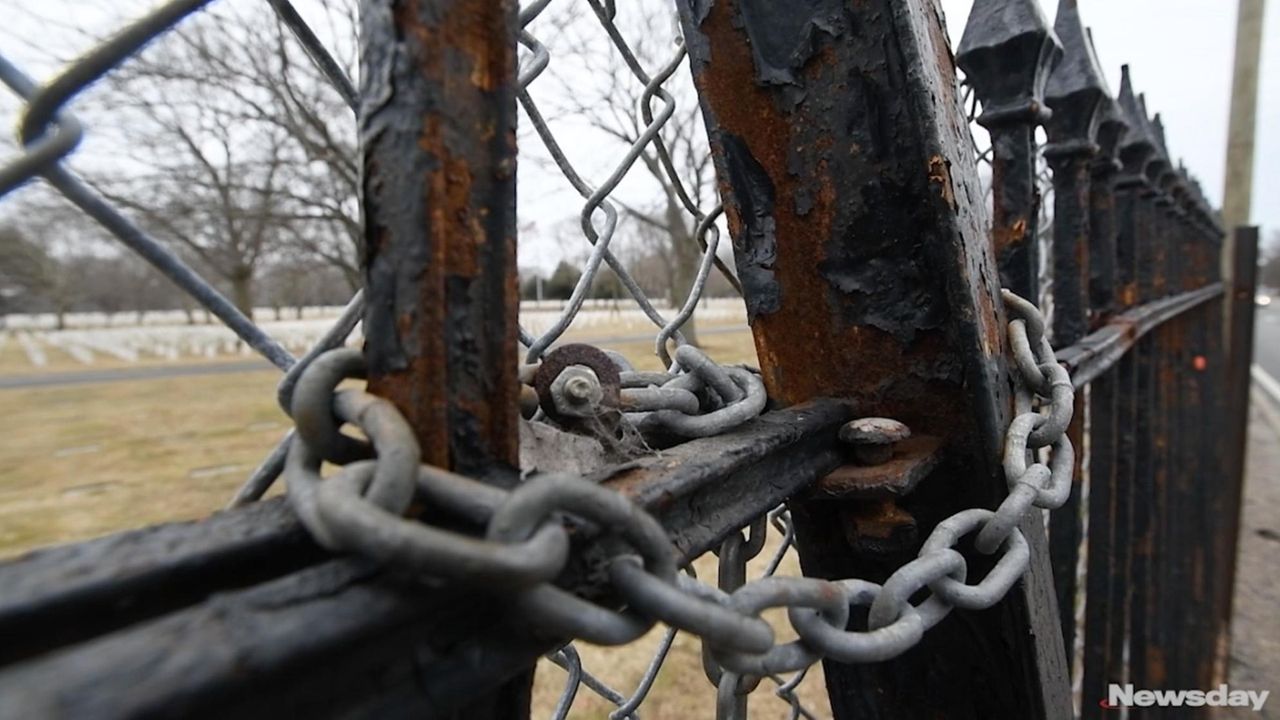 Rep. Thomas Suozzi (D-Glen Cove) is asking the Department of Veterans Affairs to speed up the renovation process for repairs on the fence along Wellwood Avenue at Long Island National Cemetery in Farmingdale.  Credit: J. Conrad Williams Jr.

Work is expected to start as early as next month on mending the Long Island National Cemetery’s historic wrought-iron fence — battered over the years after being hit by dozens of vehicles.

Plans call for replacing or repairing the “unsightly” fencing and moving it further away from the street, officials said Saturday.

About $9.2 million in federal funding for the project — which includes construction of a limestone-faced columbarium with 6,240 marble-covered niches for the cremated remains of veterans and their families — was secured last year, said Srey Austin, director of the Farmingdale cemetery.

The collisions with the iron and chain-link fence that lines more than a mile of the cemetery along Wellwood Avenue and Pinelawn Road have left their mark, with some portions of the fencing left leaning or patched with chain-link.

Much of the iron work is now rusted, its black paint peeling.

“It is very unsightly,” Austin said.

The spear point-topped iron fencing was installed a few years after the 1937 opening of the cemetery. Chain-link sections were installed along the newer, northern section in the 1960s, said cemetery foreman Paul White.

Philip Gomez, 75, a Vietnam veteran and former commander of American Legion Post 94 in Babylon, said he has long been disheartened by the poor condition of the fence.

“These men gave their lives to keep us free,” he said of those buried at the cemetery. “Their final resting place should be honored.”

Rep. Thomas Suozzi (D-Glen Cove) said Saturday at a news conference outside the cemetery that the current condition of the fence “doesn’t really represent how much we value our veterans.”

“When these many thousands of cars drive up and down this road and see this fence damaged and in disrepair, it sends a bad message,” he said.

Suozzi said he will contact the Department of Veterans Affairs “to try to keep a little pressure on to keep it moving and get it done on a timely basis.”

Fence design work and surveying are underway, and construction is slated to start in late March and be completed in mid-November, Austin said. Original fencing will be refurbished when possible, and sections of chain-link fencing along Wellwood and Pinelawn will be replaced by wrought iron similar or identical in design to the original. The columbarium is set for completion in May 2019.

About 350,000 veterans and family members are buried at the 364-acre cemetery.

Much of the fencing along Wellwood is only about 2 1/2 feet from the curb, which, along with the speed of many passing cars, is why so many accidents occur, White said.

In sections where the fence is close to the road, the new or relocated fence will be installed about 5 feet in from the road.

The chain-link fencing off Colonial Springs and Little Neck roads will be replaced with new chain-link or aluminum-post fences, Austin said.