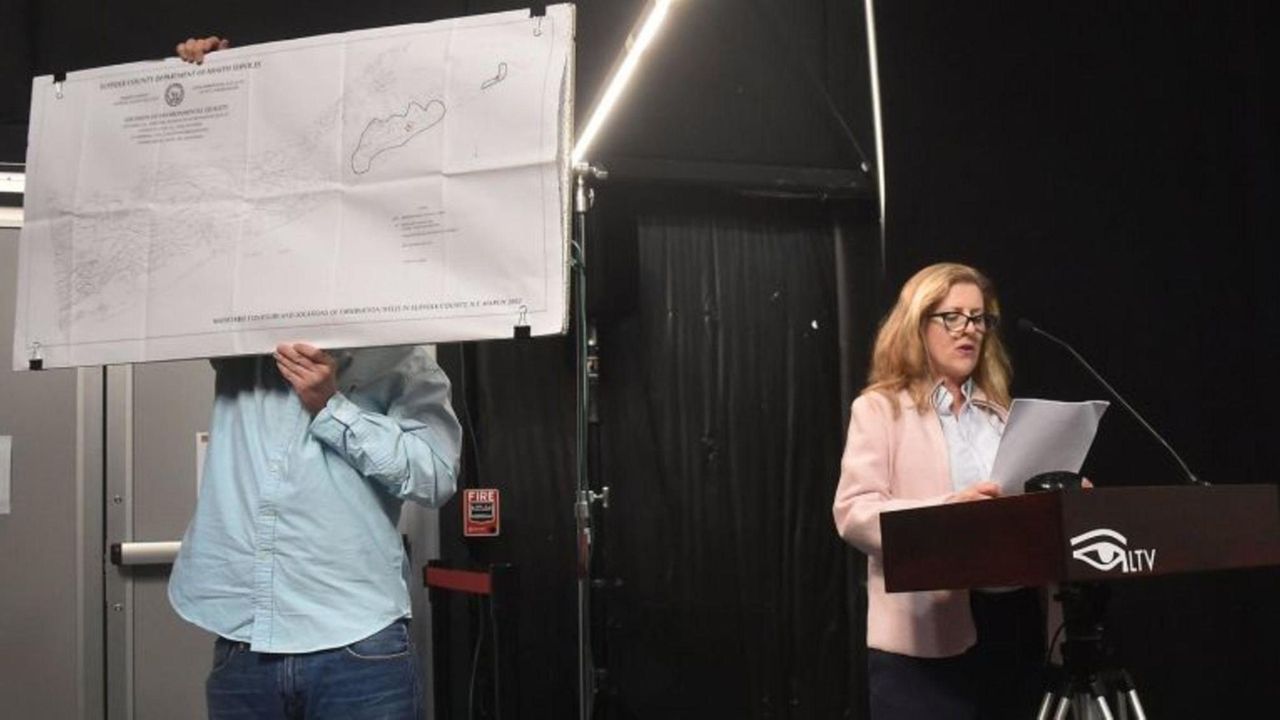 East Hampton residents and stakeholders attended a Wainscott hearing Thursday, May 17, 2018, to voice support and opposition for a developer's plan to build the state’s first offshore wind farm 30 miles east of Montauk. As part of the project, Deepwater Wind is seeking an easement to route a power cable through a Wainscott beach and under town roads to a substation in East Hampton. Credit: Newsday / Vera Chinese

Deepwater Wind was selected by the Long Island Power Authority in January 2017 to provide renewable energy to the region through a 15-turbine project known as the South Fork Wind Farm. On Thursday night, the East Hampton Town Board and town trustees hosted a joint public hearing at LTV Studios in Wainscott to discuss issuing an easement that would allow a power cable to make landfall at a Wainscott beach and travel under town roads to a substation on Cove Hollow Road in East Hampton.

About 50 people took the podium at the hearing. Some spoke against the plan, citing ecological and financial concerns. Others expressed support, pointing to job creation and environmental benefits.

Carl Safina, a marine ecologist and visiting professor at Stony Brook University, urged the boards to “take a step back” before approving the easement and raised the question of whether the wind farm is the “best way to go clean.”

He said he would instead support a mix of smaller renewable-energy providers.

Rhode Island fisherman Joel Hovanesian said Deepwater was dishonest with the fishing community there when it built the Block Island Wind Farm, the nation’s first offshore wind farm. He said representatives said the project would place only one concrete pad, which can interfere with fishing equipment, over the project’s power cable, but the final number was much higher. “We ended up with 49 concrete mats when we were told one,” he said. “These people, in my opinion, cannot be trusted.”

In a phone interview after the meeting, Clint Plummer, Deepwater’s vice president for development, said the company had said one percent of the cable’s route would require a mat.

Several other people raised concern over how much the project will cost local ratepayers. Deepwater officials contended that they have been transparent in saying the project is expected to cost ratepayers $1.62 million over 20 years, and would raise electric bills $1.19 per month in its first year.

“Those numbers have been out there for over a year,” Plummer said.

Other residents said they embraced the project, arguing it would help the town reach its goal of meeting all of its energy needs through renewable sources.

“We are putting 110 million tons of carbon dioxide into the atmosphere daily,” said Cate Rogers of Springs.

Deepwater is under a tight timetable to have the project built and producing power by December 2022 under its $1.62 billion contract with LIPA. Under state rules, Deepwater can’t start the permitting process until it can demonstrate “local site control” for the Wainscott cable route.

Deepwater has proposed a community benefits package, which it estimates is worth $8.5 million, in exchange for the land rights. Those benefits include $2 million in funding for an ocean industries sustainability program and $1 million for a Wainscott water infrastructure fund. The company would also maintain an operations office in Montauk, which would create local jobs.

Plummer has said that if the town declines to grant those easements, Deepwater will move forward with a plan to land the cable at state-owned land and revoke the benefits package.

State to hold meetings on wind-energy blueprintNew York State will hold a public meeting Monday in Southampton to discuss its blueprint ...