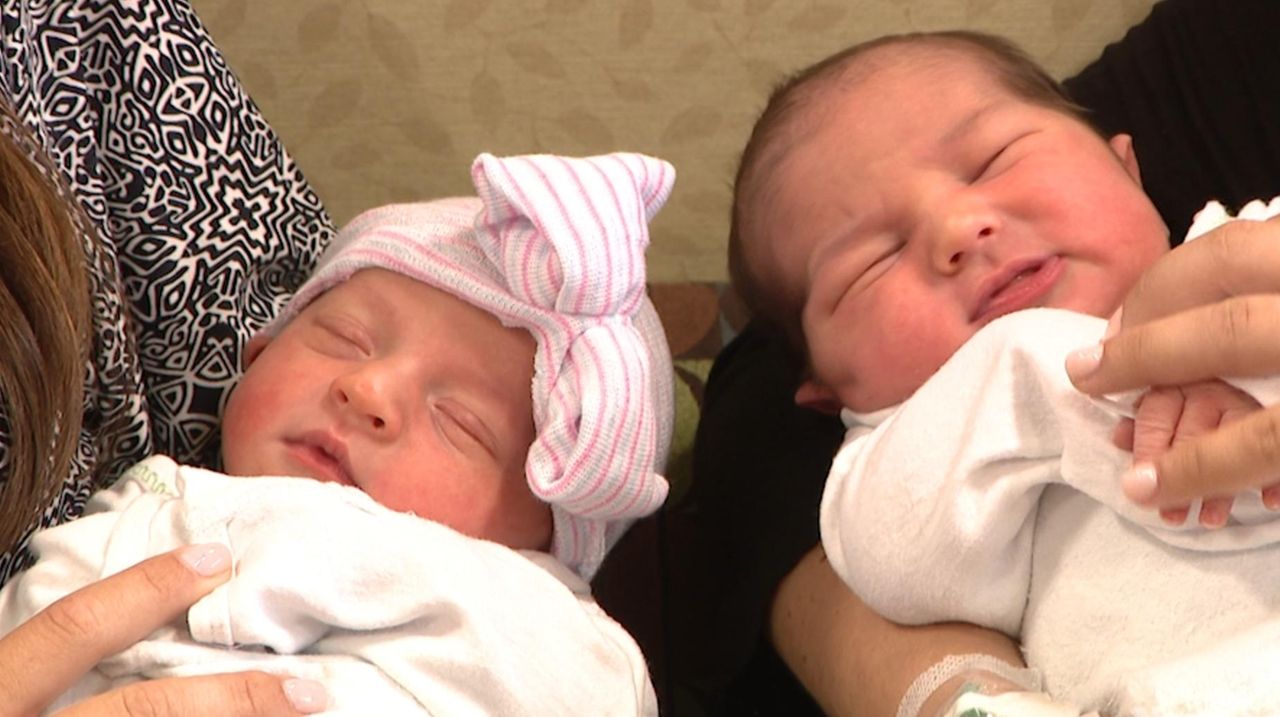 Sisters Jessica Lampert of Commack and Kristin Cronin of Babylon delivered babies within hours of each other on Thursday, July 20, 2017, at Good Samaritan Hospital in West Islip. Lampert delivered a girl, Blake Kay, at 8:15 a.m., and Cronin delivered a boy, Justin Paul, at 10:40 a.m., both by Dr. Athanasios Antoniadis. Credit: News 12 Long Island

Two babies who had been born a couple of hours apart were resting quietly Thursday at Good Samaritan Hospital in the arms of their mothers — mothers who also happen to be sisters.

Siblings Jessica Lampert, 30, of Commack, and Kristin Cronin, 34, of Babylon, both gave birth on Wednesday, to a girl and a boy, respectively.

The sisters said they were surprised when they found out several months ago that their due dates were the same.

Toward the end of their pregnancies, the siblings realized they would likely need C-sections, Cronin said. They had the option of scheduling their operations on the same day and both were on board for it.

“We thought it’d be more fun to do it together,” Cronin said.

“As an ob-gyn you have long hours and times like this is what makes it special,” said Dr. Athanasios Antoniadis, who helped deliver the cousins.

Antoniadis also helped deliver each sister’s first child: Cronin’s son Thomas and Lampert’s daughter Avery, both 3, were born six months apart, also via C-section. Antoniadis has attended deliveries for some of the women’s cousins as well.

“He’s like part of the family,” Lampert said with a smile.

Lampert said she was a little nervous for her sister when she found out Justin was in breech position, meaning the baby is positioned with its feet or buttocks to be delivered first, instead of the head. But both said the deliveries went smoothly.

Both sisters are coming along in their recovery, and the babies are doing “great,” Cronin said.

“They look like they can be twins,” she added.

The women’s younger brother, James Darcy, 25, of Dix Hills is the godfather of both newborns.

When asked if they planned on having more kids, Cronin and Lampert jokingly said they think they are done and may consider dogs instead.

“Now I have two boys of my own and from my sister I have two nieces, so I just think we are going to share the babies and call it a day,” Cronin said.

The sisters, who were born and raised in Farmingdale, said they have always been close. They got engaged around the same time and got married within three months of each other.

“I guess we’re just getting closer and closer,” Cronin said.