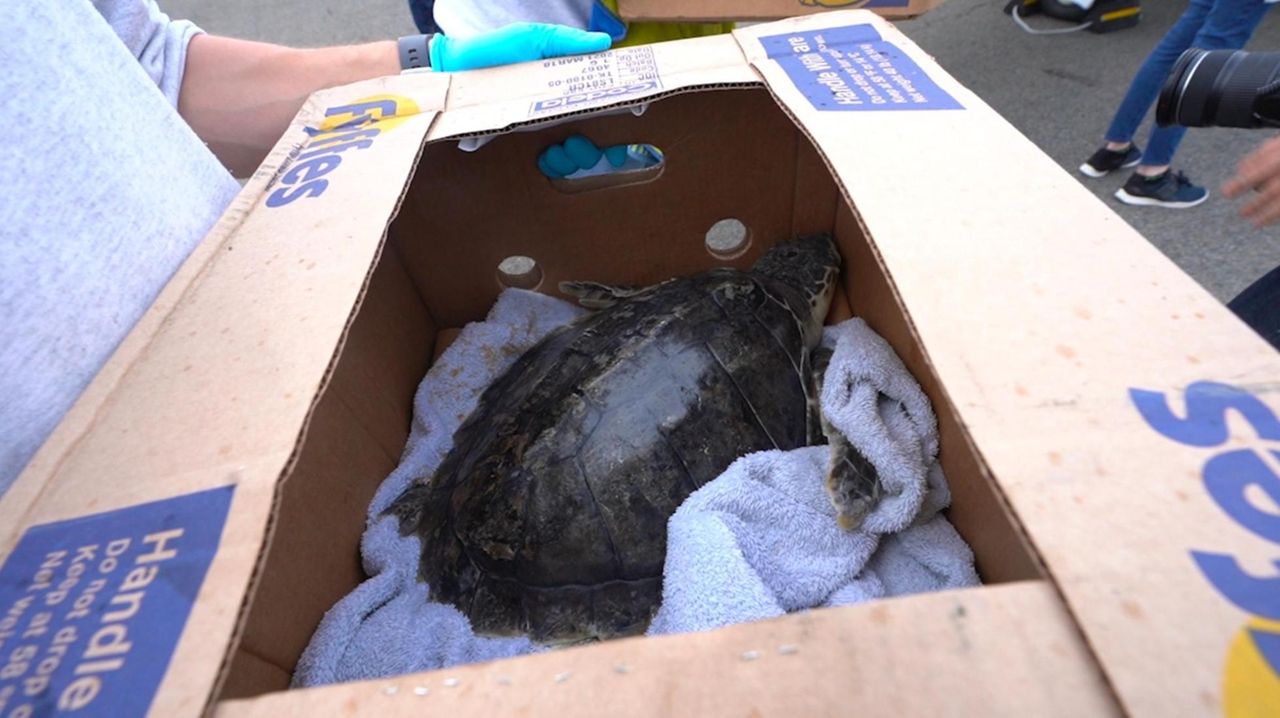 On Thursday, Kemp's ridley sea turtles caught a flight south, where they will be freed. Credit: Randee Daddona

Beastie Boy, a loggerhead sea turtle rescued off Mattituck in December, is not yet healthy enough to go back to sea — but 14 critically endangered Kemp's ridleys and loggerheads were flown out Thursday morning from Westhampton Beach's Francis S. Gabreski Airport to Georgia's Jekyll Island, where they will be freed, rescuers said.

Many of the turtles were cold-stunned when they were found. Beastie Boy was not only cold-stunned but had a fishhook in his throat.

Cold-stunning is a growing problem from New England to the mid-Atlantic. Hundreds of young turtles are failing to head South before the ocean cools in autumn. They then slip into hypothermia, bobbing helplessly on the surface for weeks or months before succumbing — unless they are lucky enough to wash ashore, be found, and be rehabilitated by rescuers, including those on Long Island.

The Atlantic Marine Conservation Society of Hampton Bays sent three of its four patients out on the same flight Thursday, courtesy of "Turtles Fly Too," a Boise, Idaho-based nonprofit. "That's how we approach conservation, working together," said Rob DiGiovanni, the society's chief scientist.

The Rescue Center is also caring for six gray seals, all suffering various maladies, from injured flippers to infections to dehydration, and they may be healthy enough to release after six to eight weeks of care, Montello said. In contrast, she said, sea turtles can take almost nine months to heal.

Reptiles, partly due to their lower metabolisms, often heal more slowly than mammals, DiGiovanni said. For starters, the turtles, he explained, must be gradually warmed to get them back to "operating speed," while mammals tend to stay in that metabolic zone.

Beastie Boy, now about 50 pounds, could top 80 pounds when returned to the Atlantic, hopefully this summer with a tracking tag.

Dr. Rob Pisciotta, a 25-year volunteer who runs the North Fork Animal Hospital and who operated to remove the hook from Beastie Boy, named the loggerhead after the 1980s hip-hop group, Montello said.

Beastie Boy, she said, "definitely has a lot of sass."

Anyone interested in donating to the two East End nonprofits can do so through their websites: amseas.org and nymarinerescue.org.