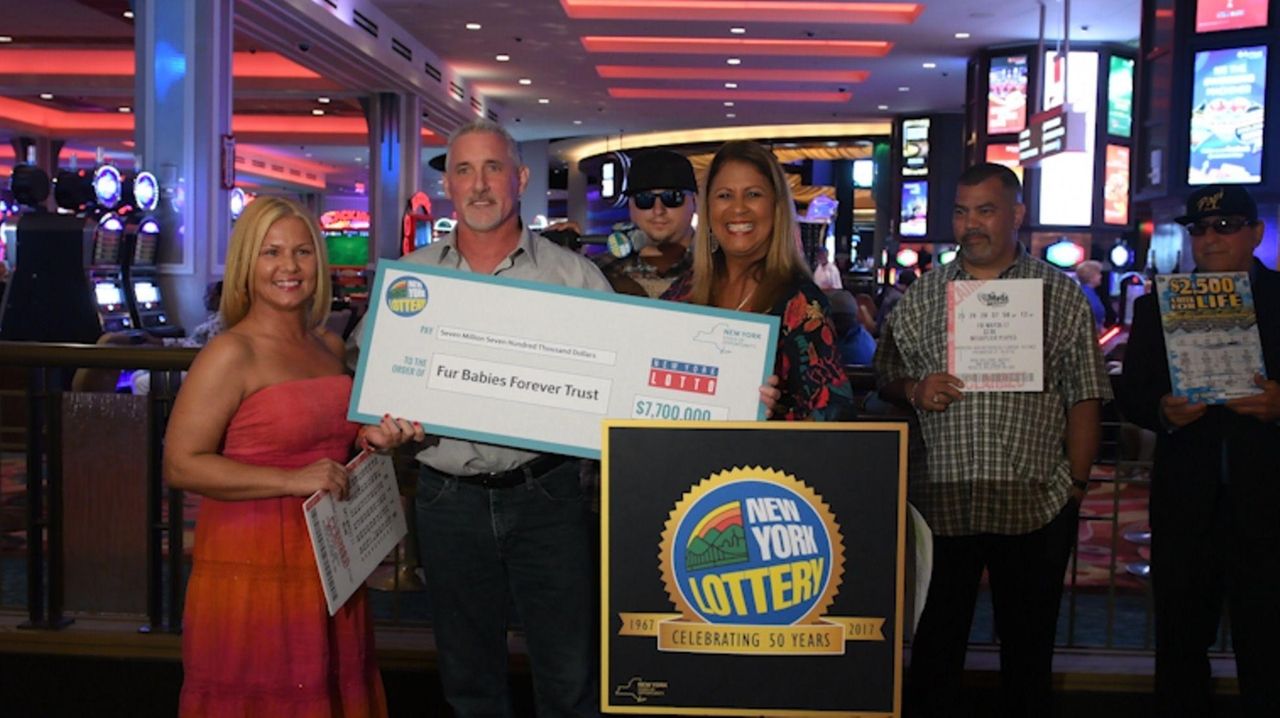 It was a lucky day for Sayville residents Helen "Ellie" Krepela and Christopher Finno, as they were presented with a ceremonial New York Lottery check for $7.7 million on Wednesday, July 26, 2017. The couple won the jackpot in the May 27 drawing, according to a New York State Gaming Commission statement. Credit: Newsday / Alejandra Villa

A “soon-to-be engaged” couple from Sayville and a New York City police officer from Commack are among four lottery winners who are taking home a total of $16.2 million in prizes, officials announced Wednesday.

Sayville residents Helen “Ellie” Krepela and Christopher Finno are animal lovers who won a $7.7 million Lotto jackpot in the May 27 drawing, according to a news release from the New York State Gaming Commission.

The couple only recently started buying lottery tickets together, and Krepela, a dental worker, purchased their ticket during a stop for gas at the Sayville Service Station on Railroad Avenue.

Krepela, 46, said she was “freaking out” when she realized that she and her boyfriend — a general contractor — had won.

“I called Chris on his way to work,” Krepela said. “I had to put the store owner on the phone with him before he would believe me.” She added that she and Finno, 50, spent the rest of the day second-guessing their good fortune.

“ ‘This can’t be real. Check ’em again. Check the website. Are you sure?,’ ” are the questions Finno said the couple kept asking each other before finally heading to the bank to put the ticket in a safe-deposit box, lottery officials said.

The couple then spent weeks getting their financial plans in order before claiming their seven-figure prize. “Honestly, it was a relief to get rid of the ticket,” Finno said. “I can rest now.”

Krepela and Finno opted to take the cash value of the $7.7 million annuitized jackpot, a onetime payment of $3,470,344.

The pair said they plan to make their engagement official later this year.

“Neither one of us wants anything extravagant,” Finno said. “We’ll have a nice wedding and maybe she’ll get a bigger ring.”

The police officer from Commack, Lukasz Solis, has the distinction of being the first New York Lottery player statewide to win a $3 million top prize on the $10 Wonka Golden Ticket.

A regular scratch-off player, Solis said he stopped in at Sweet Tree food store in Far Rockaway, Queens, specifically to buy a lottery ticket and chose the Wonka ticket because “it was a new game and I like to mix it up.”

Unlike other players who scratch their tickets while in the store to see if they’ve won, Solis said, “I wait to scratch the tickets at home. It helps me unwind.”

After scratching off all the numbers on the top and bottom of his ticket, Solis said he was glad to see a match on the number 22 — then he checked his prize.

“You scratch a ticket with the hope of winning $50 or maybe winning your money back,” Solis said. “This has not really sunk in yet.”

Solis, who opted to receive his $3 million in 20 annual payments of $150,000, said plans for the money include helping his wife return to school and making home improvements, lottery officials said.