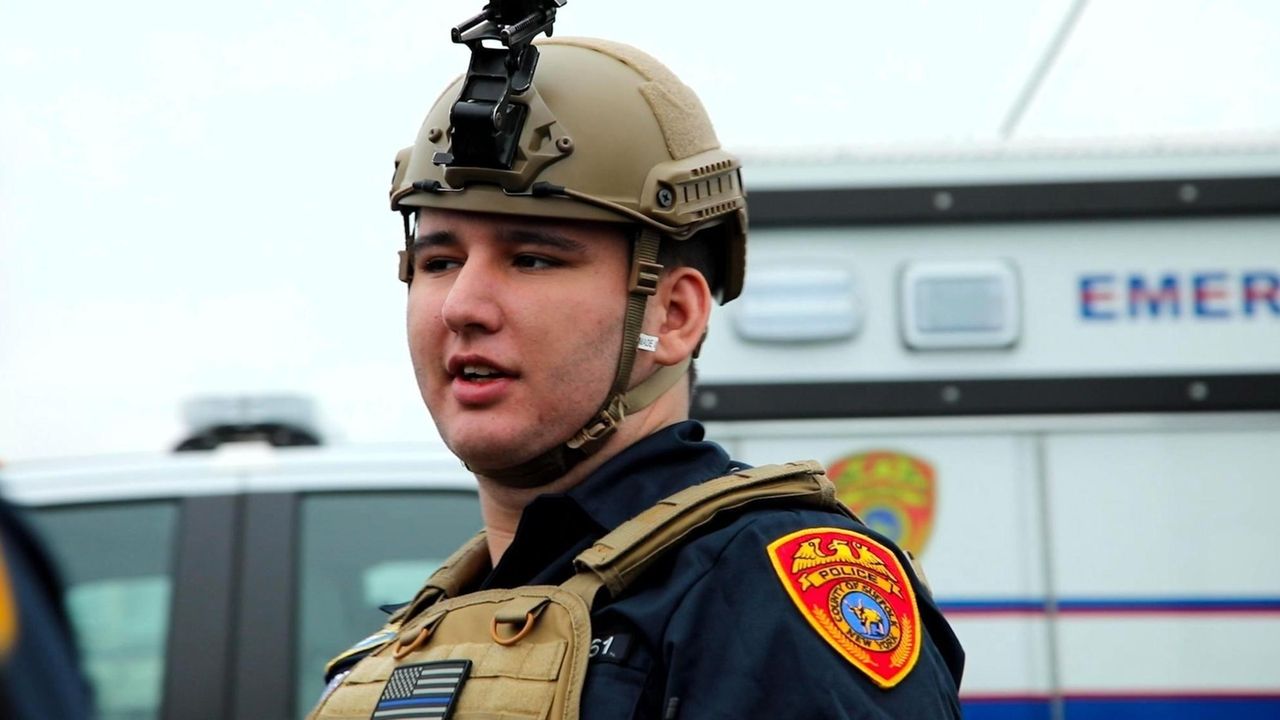 Tyler Alvarez, son of NYPD Det. Luis Alvarez, who died of 9/11-related cancer, was sworn in as an SCPD ‘Emergency Service Officer for a Day’ at a ceremony Tuesday at the Special Patrol Bureau in Ronkonkoma.   Credit: Barry Sloan

Life has been teaching Tyler Alvarez some hard lessons.

This year, the young man's father, Luis Alvarez, the former NYPD officer who championed benefits for the first responders of 9/11, died of cancer related to his time at Ground Zero.

Also, the 20-year-old Oceanside resident has been unable to pursue his dream of following his father into police work due to his developmental disability, Asperger’s syndrome

Tuesday, though, his dream came true — if only for a day. Alvarez was sworn in as a Suffolk County "Emergency Service Officer for a Day." The county pulled out all the stops to provide him with a swearing-in ceremony and a day of police exercises that included him leading a mock raid and arrest.

His dream-day came with all the trimmings. Outfitted in the dark blue uniform of a Suffolk police officer, replete with his father's badge number of 1361, Tyler Alvarez stood ramrod straight as Suffolk Police Commissioner Geraldine Hart administered the oath.

County Executive Steve Bellone told Tyler he was joining a police unit that handles some of the most challenging work — hostage situations, criminals barricaded in buildings, and the serving of high-risk warrants. Then Bellone told the audience in the unit's Ronkonkoma headquarters some traits Tyler shares with his father.

Luis Alvarez was an NYPD detective who spent three months at Ground Zero searching for survivors and remains. Sixteen years later, he was diagnosed with 9/11-related cancer. Shortly before his death in June at age 53, he spoke alongside comedian and activist Jon Stewart to Congress about the effects of the cancer on his health and the need to extend health benefits to first responders.

Throughout Tuesday's ceremony, Alaine Alvarez watched with a mother's pride as her son saw his dream manifest before his eyes.

"This has been his dream his whole life, since he could walk," Alaine Alvarez said of her son. "His first toy was a gun. He's always wanted to get the bad guy."

Tyler Alvarez was born with Asperger’s syndrome, a developmental disorder characterized by significant difficulties in social interactions. He is especially high-functioning, his mother said, but is held back by the diagnosis.

"It's unfair," Alaine Alvarez, 52, said. "This is as close as he'll ever come to doing something like this."

After the swearing-in ceremony, Tyler Alvarez got to lead the emergency services unit on a mock arrest. Donning a protective helmet and body armor, he rode in the unit's big, black tactical armored vehicle, carrying a gun that shoots a kind of plastic pellet.

He led the way as the unit moved in formation around the target building and stormed inside. The officers tossed in a small explosive that let off a big sound and flash, and Tyler quickly moved in shooting his weapon at a rubber dummy and cardboard target.

After he made the arrest, Tyler Alvarez took a big breath and smiled broadly as the unit erupted in cheers and clapping. He proudly stood with them exchanging fist bumps and high-fives.

Afterward, speaking to a row of TV news crews, he said that all this felt so natural to him. (He loves to play paintball.) He spoke with pride about how well the raid was executed.

Then Tyler Alvarez excused himself.