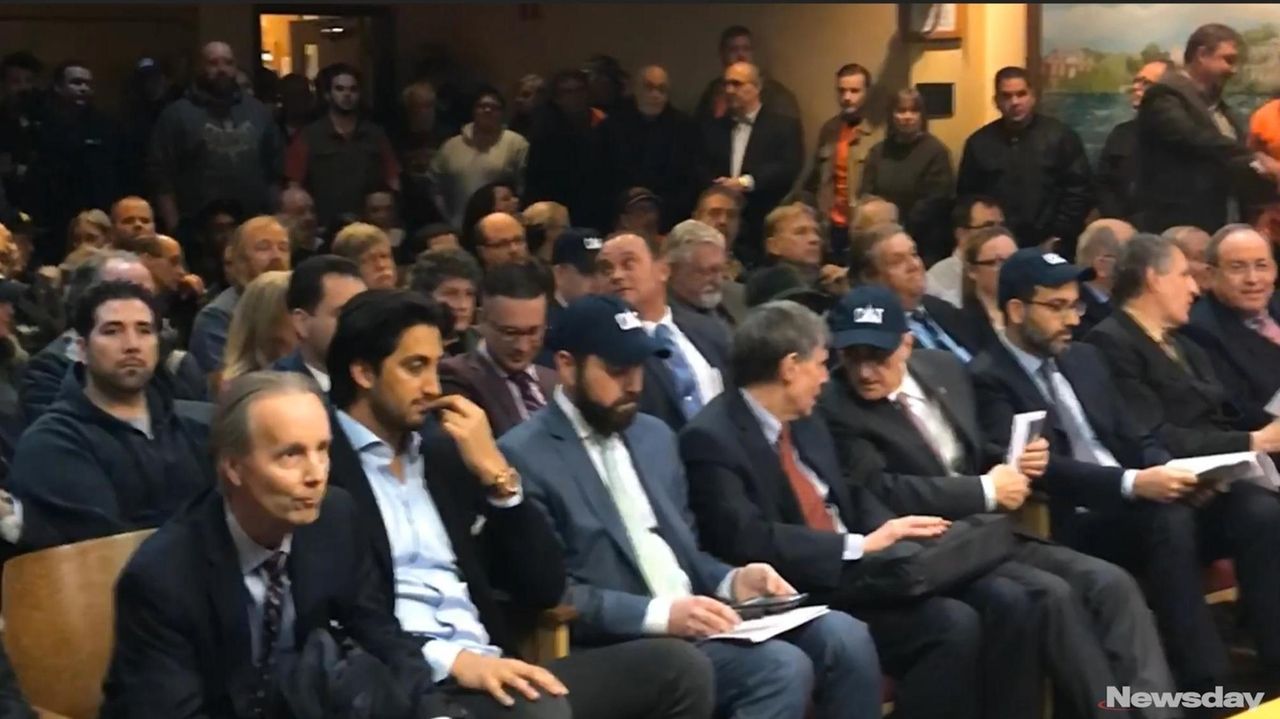 Riverhead residents posed dozens of questions to the backers of a proposed $40 million land deal for the EPCAL site in Calverton during a nearly four-hour hearing Wedneday night at Riverhead Town Hall. Credit: Newsday / Jean-Paul Salamanca

Riverhead residents sought answers to dozens of questions about the backers of a proposed $40 million land deal — including queries about company finances, its background, and previous legal issues — during a nearly four-hour hearing Wednesday night.

The main Riverhead Town Hall meeting room was filled to capacity as the town board held the long-awaited “qualified and eligible hearing” to determine if Calverton Aviation and Technology LLC — a joint venture between Calverton-based Luminati Aerospace and majority owner Triple Five Real Estate I LLC — would be able to move forward with their plans to convert more than 1,600 acres of the Enterprise Park at Calverton into space suitable to expand Luminati’s operations. The proposal calls for building 1 million square feet of commercial industrial space at the site.

Representatives from the venture presented details of their plan for almost two hours. Stuart Bienenstock, director of business development for Calverton Aviation and Technology, said by considering the group’s proposal, the town board had a chance to bring the aviation industry back to Riverhead. The aerospace company Grumman Corp. left Long Island, including its large Calverton manufacturing plant, in 1994.

Calverton Aviation and Technology “is incredibly committed, excited, and we’d love to share our enthusiasm with the countless people who will benefit from the property,” Bienenstock said.

Representatives from several aviation-related companies also spoke at the meeting, stating their willingness to do business with the Calverton group.

“We haven’t even started the project and we have several companies that want to come,” Nader Ghermezian, chairman of the Triple Five Group, told the board.

Yet some residents were unconvinced, asking about concerns ranging from Luminati’s finances and profitability to the possibility of tax breaks for the group and how the proposed development could impact local water quality.

Rex Farr, a Calverton resident, told the board that while he would like to see the aerospace industry return to Riverhead, “this is the biggest deal in Riverhead’s history, and I think that you as a board . . . owe us the courtesy of exploring every question that we have asked.”

At times, the meeting grew tense when questions addressed Luminati chief executive Daniel Preston’s financial, litigation and business history. Clarification on the roles of each partner in the deal also were sought by residents and board members.

“This meeting is not about Daniel Preston . . . ,” Hasday said, adding that the hearing shouldn’t turn into “a referendum” on his client. “This session should not become a circus.”

Town Supervisor Laura Jens-Smith said the questions were valid. “The community has come to ask questions about the two purchasers, and as Mr. Preston is 25 percent of C.A.T., I think there will be questions of Mr. Preston,” she said.

Preston did not attend the hearing, Hasday confirmed afterward, because the venture group advised him not to out of concerns his presence would be “a distraction.”

The board continued the hearing to March 13 at Riverhead Town Hall.