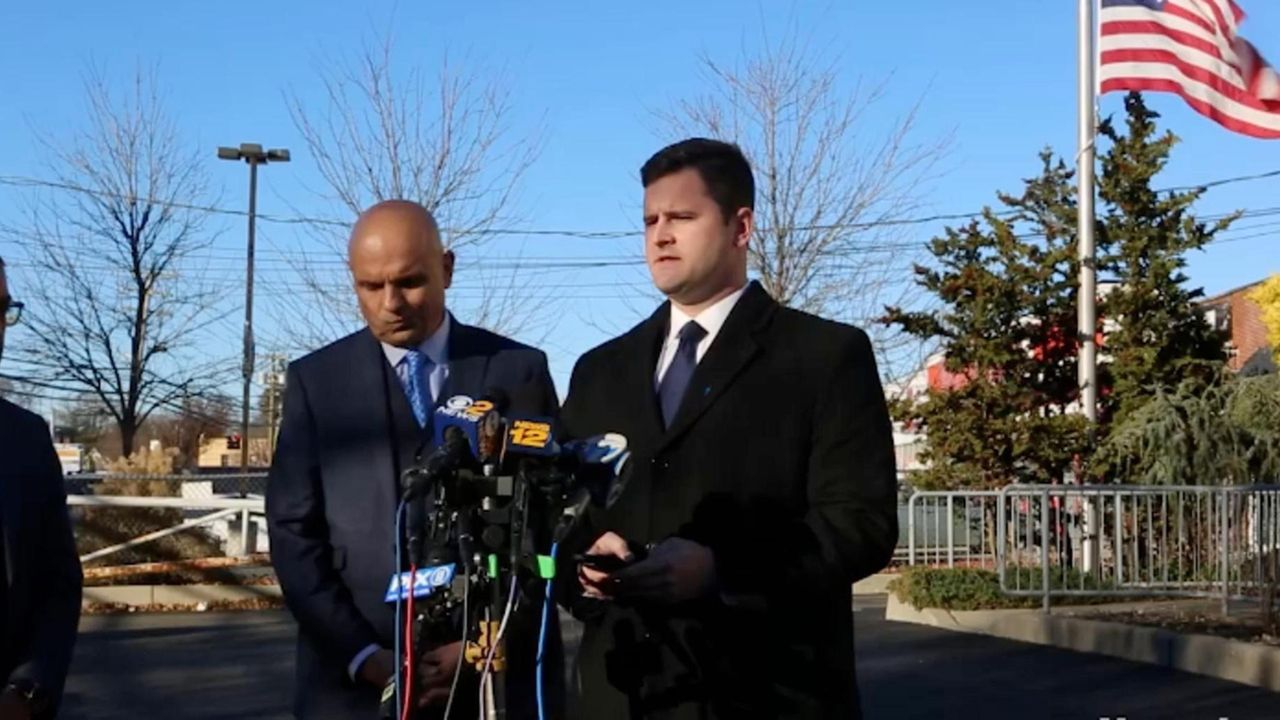 Brian Finnegan, a former staffer for Huntington Town Supervisor Chad Lupinacci, discussed his charges of sexual harassment and assault against Lupinacci at a news conference on Tuesday. Credit: Shelby Knowles

A former staffer for Chad Lupinacci, now the Huntington Town supervisor, filed a lawsuit Tuesday alleging his then-boss sexually harassed him while serving as a state assemblyman and assaulted him in an Albany hotel room last year.

Brian Finnegan, who worked for Lupinacci for three years while he represented District 10 in the Assembly, said verbal harassment — in the form of inquiries about his sex life — began almost immediately after he started as a legislative aide and culminated when Lupinacci performed a sex act on him without his consent last December.

"This was a repeated pattern of abuse that ended with sexual assault," Finnegan, 26, of Northport, said at a news conference in Huntington after the lawsuit was filed in state Supreme Court in Suffolk County. "I was forced to forfeit my career in public service, something in which I took much pride in — helping the people of Huntington and the surrounding area. ... At the drop of a hat, all of my hard work was meaningless. All because I was a target of a sexual predator. My life was shattered."

Lupinacci, 39, a Republican who was elected town supervisor in November 2017, did not return phone calls Tuesday and left a town board meeting without commenting.

Lupinacci's attorney, Brian J. Griffin, called the allegations "unequivocally false" and said the supervisor would not step down from his elected post.

"These claims and the orchestrated press conference that accompanied them are an attempt at an unjust and unwarranted financial payday," Griffin said.

The lawsuit seeks unspecified monetary damages including back pay and benefits, alleging that Lupinacci engaged in "multiple incidents of unprofessional, abusive, sexual and offensive conduct."

Finnegan's attorney, Arthur L. Aidala of Manhattan, said his client's claims are corroborated by phone and travel records, as well as witnesses whom Finnegan told about the alleged assault at the time, including his mother. Finnegan's father, mother and sister attended the news conference but did not speak to reporters.

Aidala said Finnegan, after a lot of "soul-searching," did not file a police report about the alleged assaults and instead engaged in settlement talks for much of the past year with Lupinacci's attorney. Aidala said Tuesday marked the deadline for the one-year statute of limitations to file a civil suit.

According to the lawsuit, on Dec. 5, 2017, Finnegan woke up "several times" between 2 and 5 a.m. in an Albany hotel room he was sharing with Lupinacci — with whom he traveled to help clean out his office — and saw him "standing and leaning over him."

Lupinacci told Finnegan they had to share a hotel room for budgetary reasons, Aidala said.

On some of those occasions, the lawsuit said, Finnegan woke to find Lupinacci, who had been "intoxicated" earlier in the night, touching the zipper of the suit pants in which he had fallen asleep. Finnegan, according to the suit, batted his hand at Lupinacci and asked him what he was doing, but then repositioned himself and fell back asleep. When Finnegan tried to confront Lupinacci, he went back to bed, according to the suit.

Then on Dec. 13, 2017, the two shared another hotel room while working in Albany. According to the lawsuit, Finnegan woke up in his hotel bed at about 2:30 a.m. and "noticed that his underwear and body parts were out of place." The suit alleges that Lupinacci performed a sex act on Finnegan.

The suit said Finnegan told Lupinacci, "You've been touching me in my sleep and I'm not going to take it anymore," and fled the hotel room.

Finnegan said he quit his job as Lupinacci's chief of staff days after the alleged assault and decided not to take a promised six-figure job as an executive assistant and senior adviser to Lupinacci, who was to begin post as supervisor in January.

Lupinacci represented parts of Huntington and Babylon towns in the Assembly for five years before his election as supervisor, after the retirement of Democratic Supervisor Frank P. Petrone. Lupinacci campaigned on promises of ethics reform, term limits and lower taxes.

“I can say personally the last 11 months working with the supervisor, he’s a very nice individual," Cuthbertson said. "I’d be surprised if these allegations are true, but we have to obviously take what’s being said at face value and there’s a process by which those claims will get evaluated.”