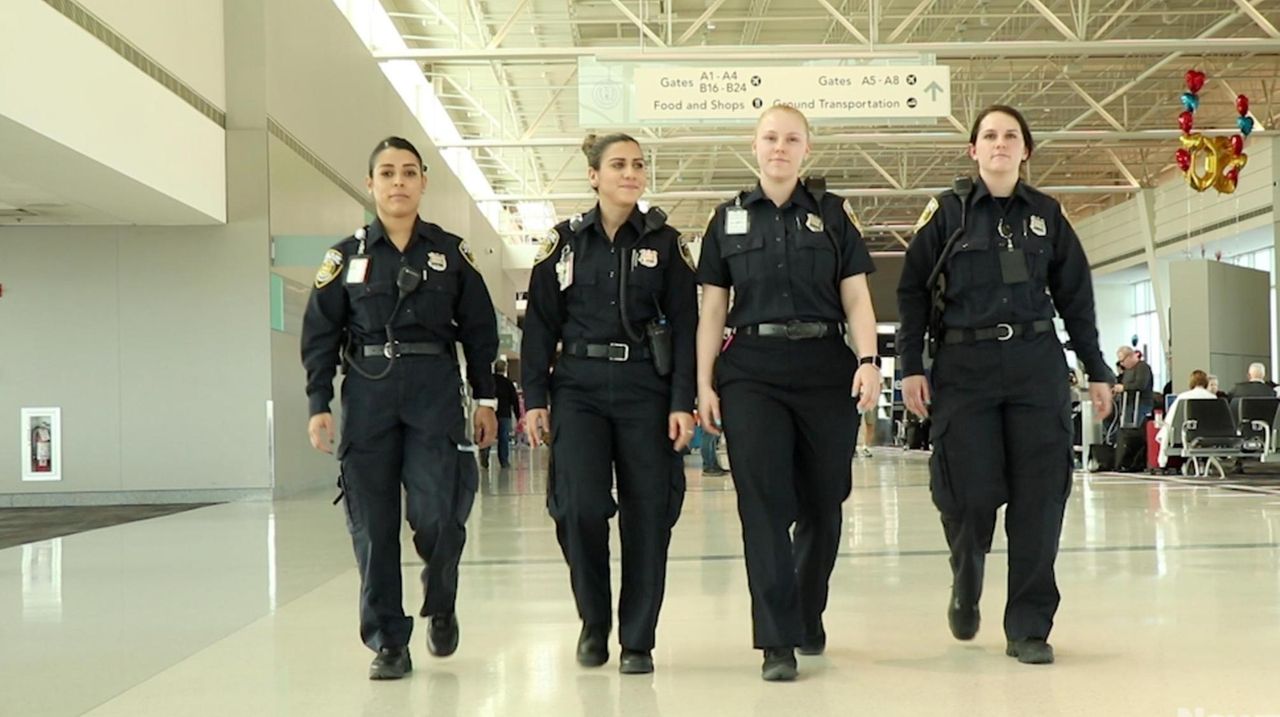 The hiring of the four women this year have tripled the number of women in the department, added its only bilingual speakers and re-energized the whole staff, officials said.

“They’re a breath of fresh air,” airport Commissioner Shelley LaRose-Arken said of the new employees who started early this year.

Raisa Calderon, Jasmine Ramos, Alexandra Scribner and Samantha Carman are part of the department’s first class of new hires in about 15 years and the first that is majority female, officials said.

Only two others — including a sergeant — are female in the 21-member department, which patrols the Islip Town-owned airport, ensures security measures are being followed, evaluates threats and aids sick passengers.

The new hires said they have always wanted to work in law enforcement. They grew up admiring people who put their lives on the line to protect others.

“I wanted to make a difference,” Scribner, 25, of Sayville, said.

Alongside two men, they joined a department that was stagnant and “steadfast in its ways,” said airport security director Kevin Burke, who joined the department six months ago.

“With them coming, it almost revived everybody,” Sgt. Craig Hatcher said.

The culture change is not just because of the hires’ gender, officials said. They are also the first new blood in years and, in their 20s, are of a different generation.

The enthusiasm and drive they have brought to the job are contagious, officials said. Training them has boosted seasoned officers’ confidence and morale by reminding them of their own skills and the job’s importance.

Four is a small number, but with their hiring, women now make up 28 percent of the department. That is more than double the average — about 12 percent — for police departments across the country, experts said.

“This department is above the norm significantly with women,” said Deborah Friedl, president of the International Association of Women Police.

Nassau and Suffolk police departments fall below average, with female officers making up about 10 and 11 percent, respectively, of those 2,400-officer departments.

The low national figures are not for a lack of women who want law enforcement jobs, experts said. Departments struggle to retain women, often do not seek them out in recruitment efforts unless legally required to and issue physical tests that focus on upper body strength, which can put some women at a disadvantage. And some women can also face harassment on the job.

Airport officials said they did not deliberately seek to hire more women. The new hires were the top candidates, passing a Civil Service exam for the title of airport security guard, a psychiatric evaluation and the same physical agility test New York police officers take. They will carry guns once they go through peace officer academy.

The hires’ impact so far is consistent with what researchers have seen: Women are agents of transformation in their departments. They force departments to rethink how they operate, including their family accommodation policies and recruitment practices, experts said.

The hires joined the department a few months after another female officer was fired in November. Jennifer Nin filed a wrongful termination lawsuit in U.S. District Court in Central Islip against the town, Suffolk County and government officials on March 22.

The lawsuit, also filed with her mother, Dianne Tritschler — both of Middle Island — alleges their civil rights were violated after a verbal dispute between Nin and another airport officer led to the suspension of Nin’s firearms license, her firing and the seizure of her mother’s guns.

Nin, who declined to comment on her experience in the department, called what the new hires are doing “wonderful” but said they won’t know all about the job until they go through more training and work there longer.

For Carman and Ramos, having so many female co-workers is a departure from their previous jobs of bail bondsman and guard at traffic court in Hauppauge, respectively.

Starting alongside other women has its benefits, they said.

Ramos, 22, of Bohemia, said she would have felt “more lonely,” especially because the women’s locker room is so small. And she can go to the other women with “certain things we can’t really speak to with the men.”

“We really have each other’s back,” Ramos said.

The men are “learning to be more considerate of what they say,” Ramos said. While she did not have any examples, she said “they’re all trying their hardest to make and set good examples for us.”

The new officers said they have been welcomed into the male-dominated department.

“I’m not seen for my gender,” Calderon, 26, of Central Islip, said. “They see the badge on my uniform and they respect me.”

But their gender can be an advantage in some ways, they said. Passengers may view them as less threatening and more approachable than male officers, so they can defuse situations more easily. Women may feel more comfortable dealing with female officers, and Spanish speakers get more help with Ramos and Calderon, who are bilingual.

And the new hires are already role models.

“Other people working here are definitely noticing it and are coming up to us and thanking us for our service,” Ramos said.

The positive feedback has also resounded outside work. Calderon has a 7-year-old son who has always known his mother wanted to be a law enforcement officer. The first time he saw her in uniform, he thought it was the “coolest thing ever.” He told his teacher “that he wants to be like me when he grows up.”

“I’m very proud knowing he looks up to me,” Calderon said. “And knowing he’s bragging to his friends and teachers about me makes me know I’m doing the right thing.”