Her head shrouded in the same soft gray material as her shirt, the 17-year-old girl gazes tenderly at the newborn, her cousin, asleep in her arms.

The teenager will never have her own children. She is just weeks from death.

Her cancer was rare, aggressive — and agonizing.

Her name was Maggie Schmidt.

Her parents, Donna DeSousa-Schmidt, a designer, and Steve Schmidt, a schoolteacher, have tried to fulfill some of her dreams.

“Before she died, she asked us to save other kids,” said her mother. “She loved children; I think she always had a yearning for children. ... It brought Maggie such peace to hold that little girl in her arms; she held her for like hours.”

“There’s really a multitude of reasons why we chose to start our foundation: to honor Maggie, to remember Maggie, to help others going through similar … [situations] and to spread awareness to parents to advocate for their kids, and to get a change in funding for pediatric cancers,” her mother said.

This past summer they undertook Maggie’s bucket list, found after her death.

There were two lists, actually: one in a sketchbook, one written on lined paper.

“She was always moving. … She didn’t always stick with things, but she tried everything; she loved life, she just loved exploring,” her mother said.

Another wish for this outgoing teen with a gift for friendship couldn’t be more modern: “Meet at least (one) internet friend.”

Her second-to-last wish was unachievable: “Make (it) to be an adult.”

Her final goal exemplifies her compassionate and deeply generous spirit: “Hand food and drinks to homeless.”

One of Maggie’s dreams did come true. She was befriended by the Red Hot Chili Peppers — most notably guitarist Josh Klinghoffer, who came to dinner, took her out for ice cream, and attended her wake and funeral.

She met her favorite band backstage at Madison Square Garden, thanks to the kindness of a guard who spotted her aunt sobbing, having just learned that meeting the group, as Maggie had hoped, wouldn’t be possible.

The band came through on that February night in 2017 and later invited her to their concerts as a VIP. “They had a big influence in our lives; they were really like angels to us,” her mother said.

Her daughter was talented and versatile. She “liked exploring music and musical instruments; she played the piano, the violin, guitar, the flute, and she liked keyboard music.”

Maggie also was highly independent, determined, and fearless enough to do back flips on the trampoline — qualities that served her well throughout her life and illness, as when she toughed it out to see the Red Hot Chili Peppers.

“I said, ‘You don’t have to go,’ ” her mother recalled. “She held up her hand and said, ‘Mom, I got this,’ ” before again vomiting into a bucket as her boyfriend rubbed her back. “That’s just the reality of childhood cancer,” her mother said.

Facing their second summer without Maggie, her parents and her brother, Steven, 22, shied away from their traditional vacation with their cousins on the Jersey shore. DeSousa-Schmidt said her husband needed to get away. The Peak to Sky festival in Big Sky, Montana, where Klinghoffer was playing with some of his band members, gave the couple a destination.

“So I said, ‘I’ll go with you and make this in honor of Maggie,’” her mother said. “Then our son kind of said, ‘It’s not really a cross-country trip unless you dip your feet in the Pacific,’ so we decided to make it to the Pacific,” she said, where some of Maggie’s ashes joined the waves.

Setting forth without reservations and chronicling their journey on Facebook, Maggie’s mother said it almost seemed as if their daughter were guiding her parents along the way.

“I had said, ‘Maggie, if you are on this trip, send me a hummingbird.’ We ended up finding an Airbnb by chance — and the place was covered with hummingbirds,” as the owner had hundreds of feeders. 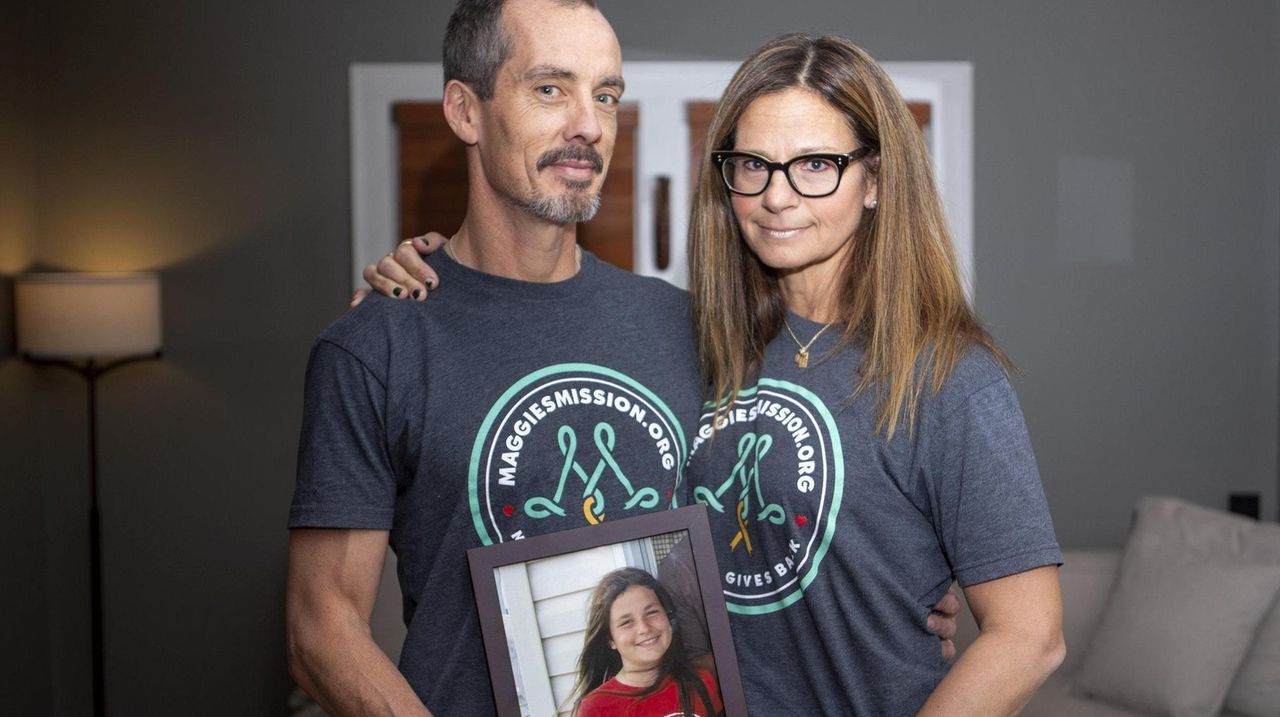 Cancer fund helps honor deceased daughter's wish Steve Schmidt and Donna DeSousa-Schmidt, of Greenlawn, have raised close to $600,000 for Memorial Sloan Kettering Cancer Center as they honor a wish left by their daughter, Maggie Schmidt, who died of a rare cancer at 17. Credit: Newsday / Shelby Knowles

From there, also by chance, they were directed to Roslyn in Washington State’s Cascade Mountains, where the 1990s television show “Northern Exposure” was filmed. Maggie had been named after the show’s bush pilot, Maggie O’Connell — and the town has a Maggie’s Café.

Another fortuitous stop was Pepin, Wisconsin, where the Laura Ingalls Wilder Museum honors the author; Maggie had enjoyed the “Little House on the Prairie” television series.

Altogether, the family says they traveled 6,693 miles in 17 days. “We cried on our way out, cried in between and cried going home,” Maggie’s mother said on her blog.

Sometimes, back home, there also is no escaping grief. “Even though it’s very hard to be in our house, I also don’t know if I could leave; I would feel like I was leaving a part of her behind,” her mother said.

The couple hopes to raise $1 million for pediatric research; the foundation also has given more than $70,000 to families with cancer-stricken children. “We pay things like mortgages, bills, and got a plane donated once, paid for gas and a pilot to fly a very sick girl home from North Carolina,” DeSousa-Schmidt said.

The community has been wonderful, she added, noting that Maggie’s high school, Harborfields, has raised almost $30,000 for the foundation and cancer research. The couple donated about one-third of that sum back to the school for scholarships for students who love music the way Maggie did.

The Kuenzlers of Holbrook are one of the families they have assisted, starting when they were reeling from the shock of their young son Brody’s diagnosis. “You instantly feel like someone is on your side, on your team right from the get-go,” said Bob, the father.

One of the foundation’s next initiatives will be the third annual Maggie’s Mile, a one-mile run on New Year’s Day at 10 a.m. at Sunken Meadow State Park in Kings Park, DeSousa-Schmidt said. It will be followed by the third Maggie’s Mission Angelversary Gala on May 29 at Centerport’s Vanderbilt Museum, she said.

“I guess we’ve thrown ourselves into this, due to finding a way to cope with the heavy loss of Maggie,” DeSousa-Schmidt said. “This has brought us peace, maybe having some control over what was uncontrollable.”

‘WE HAVE BEEN BLESSED WITH FOLKS LIKE MAGGIE’S MISSION’

Who can give you the gift of time to see them through?

Who can help you navigate the extraordinarily complicated, terrifying and perilous world of today’s advanced medicine?

Donna DeSousa-Schmidt and Steve Schmidt came through for the Kuenzlers via their foundation.

Maggie’s Mission assists families whose children are in the fight of their lives against cancer; it also is raising $1 million for New York City’s Memorial Sloan Kettering Cancer Center for research.

“Not only was it financial help, they also helped us mentally, because we’ve never been through this before,” said Bob Kuenzler, 57, of Holbrook.

“They reached out to us a lot,” he said, inquiring “how everybody was, if there was anything they could do for us, if we had any questions.”

Donna, he says, was just a text away if, for example, the couple had unanswered questions about their child’s care. “They were there for us; it’s not just always about the money part.”

Their son Brody, 9, has just made it through grueling rounds of radiation and chemotherapy for Ewing’sSarcoma after his diagnosis this past spring, said his mother, Theresa, 54. “Talk about feeling like you’ve been hit over the head with a baseball bat,” she said.

Their son’s painful leg initially was attributed to a previous fracture, and then an infection, or a change in his autism medicine. “One minute you just think your son has got some kind of a bug; the next minute [you learn] there is an 8-centimeter tumor growing off of his spine,” Theresa said.

Brody’s treatments required the family to move to New Jersey for six weeks for specialized care. His mother’s colleagues and students helped Theresa, a personal trainer, finish teaching the spring semester at Patchogue’s St. Joseph’s College before taking a leave; her husband used all the time off he was due after more than three decades of driving for UPS.

“This is the situation when you are dealing with a child with cancer; it is a full-time job, caring for him and getting him to treatments,” said Theresa, who hopes to help her son, who runs track, recover from nerve damage to his leg.

His Ewing’s Sarcoma can be cured, unlike the cancer that claimed Maggie Schmidt at just 17.

One reason the research funded by Maggie’s Mission is so valuable, he explained, is that the federal government focuses on common cancers, ones that afflict adults.

And “I suspect that as the time goes on, this funding will also support clinical trials for patients.”

Test results after the last of the series of treatments for Brody appear promising.

“We have been blessed with folks like Maggie’s Mission,” Theresa said.