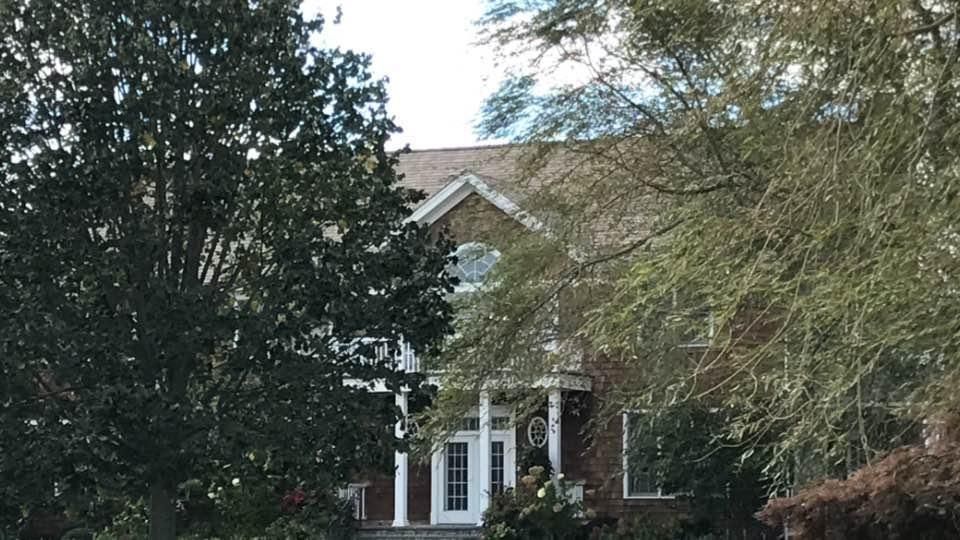 If former Trump campaign chairman Paul Manafort is convicted of federal charges unsealed Monday, he may have to forfeit his Bridgehampton house, as seen here on Monday, Oct. 30, 2017 (Credit: Newsday/Rachelle Blidner).

Former Trump campaign chairman Paul Manafort’s Bridgehampton property would be subject to forfeiture upon conviction, under terms of an indictment unsealed Monday charging him with conspiracy against the United States.

Manafort spent millions on landscaping and property maintenance, according to the indictment. Expenses allegedly include $5.4 million paid to a Hamptons home improvement company and more than $820,000 paid to two Hamptons landscapers between 2008 and 2014, according to the document.

The Bridgehampton property at 174 Jobs Lane includes a front yard moat around a small island with plantings and a footbridge. Statues of giraffes and a jungle cat dot the lawn. The house is partially hidden behind the area’s signature high hedges, and includes a pool, guesthouse and tennis court, which was flooded from the overnight storm Sunday.

The property has an assessed value of $1,928,700, according to the Southampton Town assessor’s office. The median home value in Bridgehampton is $1,841,200, according to Zillow, a real estate sales website.

The Colonial-style 5,574-square-foot two-floor house was built in 2001, according to real estate records. It has 10 bedrooms, six bathrooms and two fireplaces.

Southampton Town Supervisor Jay Schneiderman said the property is in an estate area of Bridgehampton, where it is “not unheard of” to spend millions of dollars in home improvement and landscaping.

“It’s kind of another universe out here,” he said. “Anywhere else in the world, $6 million in home improvements would be awfully suspicious. But out here in the Hamptons, that’s not crazy.”

Manafort, 68, turned himself in to federal authorities Monday morning.

He was charged with 12 counts in the 31-page indictment, including conspiracy against the United States, conspiracy to launder money, being an unregistered agent of a foreign principal, making false and misleading statements, and seven counts of failure to file reports of foreign bank and financial accounts.

Other assets that the grand jury determined could be seized upon conviction were a condo, 4D at 29 Howard St. in Manhattan, and a home at 377 Union St. in Carroll Gardens, Brooklyn, and one in Arlington, Virginia, outside Washington, D.C.

Manafort allegedly purchased both New York City properties through limited liability corporations he and his family controlled with money previously kept in Cyprus. The indictment states he paid $2.85 million for the Manhattan condo and $3 million for the Brooklyn brownstone. The indictment alleges that Manafort also misled banks so he could take out larger loans on the properties.

Manafort and his business associate Rick Gates, who also was indicted Monday, are among the first to be charged as part of special counsel Robert Mueller’s investigation. Mueller was appointed in May to take over the Russia-related probe begun by then-FBI Director James Comey after President Donald Trump abruptly fired Comey.

Manafort and Gates worked as unregistered agents for the Ukrainian government and the pro-Russia Party of Regions, among other groups, and hid the money from U.S. authorities in part using offshore bank accounts, including those in Cyrus, Saint Vincent and the Grenadines, according to the indictment.

More than $75 million allegedly flowed through the offshore accounts, and Manafort is accused of laundering more than $18 million.