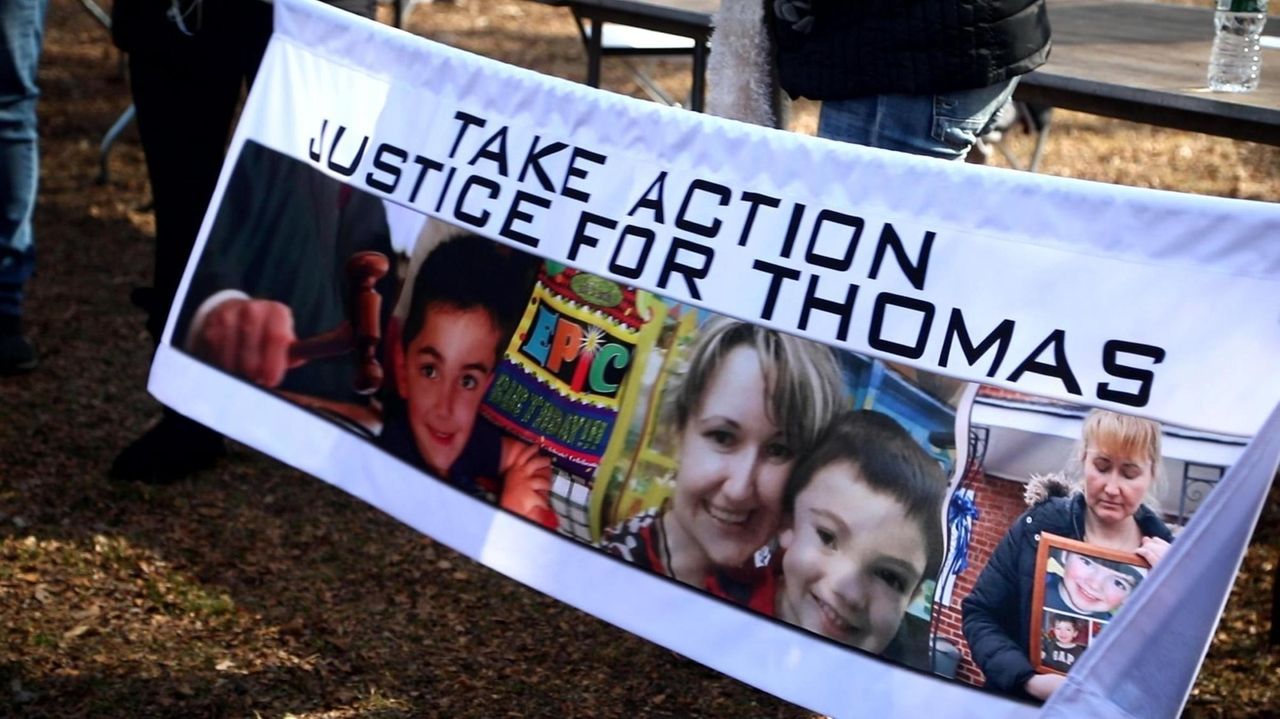 Hundreds of people gathered to march in memory of Thomas Valva, the 8-year-old boy who died last month of hypothermia after being forced to sleep in an unheated garage. Credit: Newsday / Shelby Knowles

Hundreds gathered Saturday at Heckscher State Park to honor the memory of Thomas Valva, the 8-year-old boy with autism who died of hypothermia last month after being forced to sleep in an unheated garage at his father’s Center Moriches home.

An autism advocacy group organized the East Islip march, which called for legislative action to protect children from similar dangers in the future.

Legislators, including Suffolk County Executive Steve Bellone and county Legis. Samuel Gonzalez (D-Brentwood), participated in the “March for Change." Both called for changes on the local and state level to protect children like Thomas.

Priscilla Arena, executive director and founder of Specialized Autism Support & Information in Lake Grove, said in an interview before the march that she had heard stories like Thomas’ “way too many times” and the group felt the time was right for action.

“I can’t stand for it anymore. I had people message me from around the world, on Facebook, telling me ‘I’m living the Valva case. Can you help me?’ This march today is about systematic change,” said Arena, who added she hoped to get as much attention as possible from local, state and federal legislators to push for laws to protect children like Thomas.

Amid cheers of support, Justyna Zubko-Valva, Thomas' mother, said she hoped her son would be remembered as a strong child.

“Tommy was the kind of child who was a fighter,” Zubko-Valva said of Thomas. Despite being diagnosed with autism, Zubko-Valva said her son’s diagnosis “did not restrict him from achieving successes in life and school.”

Authorities said Thomas died of hypothermia on Jan. 17 after he was forced to sleep in the unheated garage at the home of his father, Michael Valva.

Michael Valva, 40, an NYPD transit officer, and his fiancee, Angela Pollina, 42, pleaded not guilty to an indictment of second-degree murder and endangering the welfare of a child in separate arraignments Thursday in Suffolk County Supreme Court in Riverhead. The two were held without bail.

Holding signs reading “Protect our children from abuse, not the abusers,” “Justice for Thomas," “Stop Parent Alienation” and “We Are Thomas’ Voice,” people said they came to the march because the news of how Thomas died outraged them.

“This has been happening for decades to other children. It’s not just about Tommy, it’s about other children who are still going through it today,” said Dolores Feliciano, a Suffolk County resident.

Michael Carey, who traveled from Albany for the march, said Thomas’ death reminded him of the death of his 13-year-old autistic son, Jonathan Carey. He died in 2007 while being restrained by New York State workers at the now-closed Oswald D. Heck Developmental Center in upstate Niskayuna. Carey has since devoted his time to calling for legislation to protect people with disabilities who are under state care.

“Unless something major happens, abusers will continue to abuse,” Carey said, adding that federal legislation was needed to make it a felony to harm children.

DA: Thomas Valva lived and died in a 'house of horrors'

Thomas Valva remembered as 'playful,' 'sweet' child who loved to draw, sing and danceHe loved cars, especially Matchboxes and Hot Wheels. And the surest way to make him smile was to read him a story. DA: Thomas Valva lived and died in a 'house of horrors'Prosecutors outlined disturbing and graphic allegations of abuse as both defendants showed no emotion.    Protesters lash out at CPS at Nassau hearingThe hearing was convened to review Nassau's own procedures after 8-year-old Thomas Valva died in Suffolk. Strangers mourn Thomas Valva: 'It goes straight to your heart'Word of 8-year-old Thomas Valva's death spread on Facebook, Twitter and across living rooms an ocean away. Strangers turned out by the hundreds.