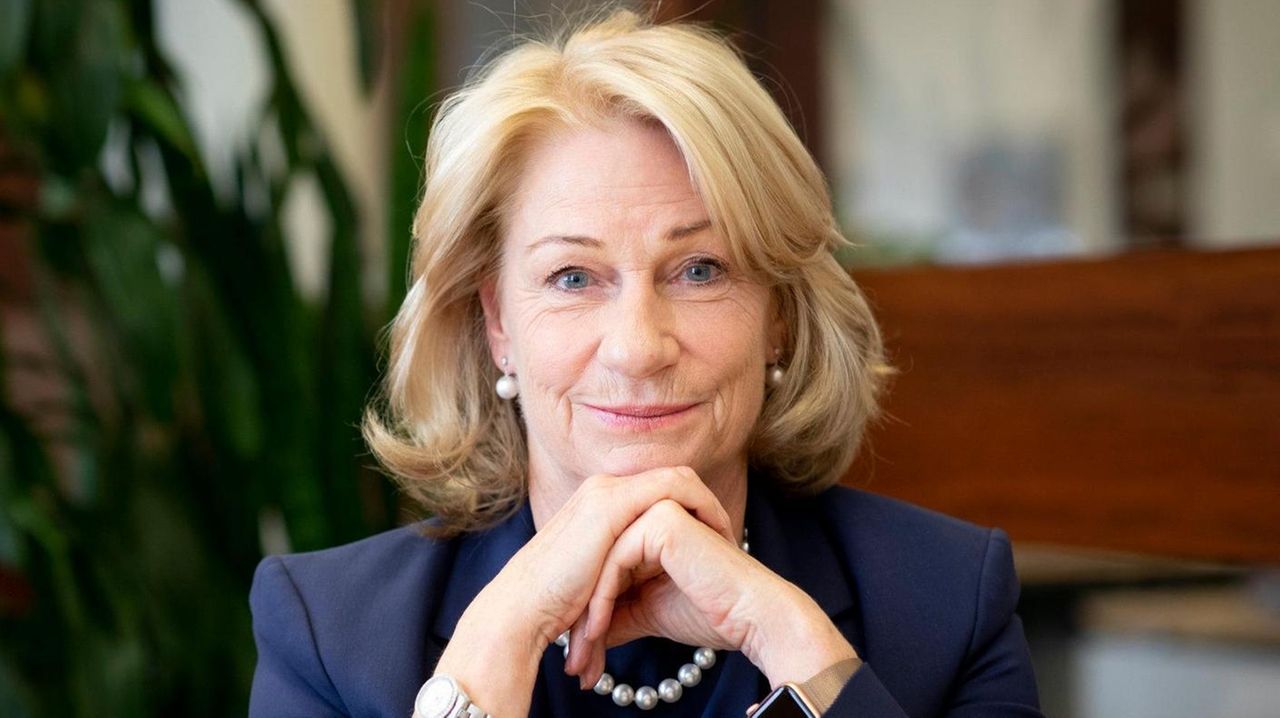 Marilyn Simons has decided to contribute a personal gift of $25 million to Stony Brook's economics department after years of running the Simons Foundation with her husband James. Credit: Newsday / Yeong-Ung Yang

Marilyn Hawrys was, like many college students, a bit fuzzy about her future. She liked numbers, but becoming an actuary seemed boring. So she chose to major in economics at Stony Brook University where, she recalls, she was mainly delighted with her improved social life as the lone girl in classrooms full of boys.

“I didn’t have big ambitions,” she said, of her girlhood in Brightwaters, the daughter of a bricklayer who went on to own a brick subcontracting company. “I imagined I’d get married and have a family. My mother cautioned me it was good to have skills in case anything happened to me.”

What happened to her, as it turned out, was marrying a future billionaire, James Simons, now 81, whose East Setauket-based hedge fund Renaissance Technologies has made him one of the world’s wealthiest people.

Together the couple oversees their philanthropic Simons Foundation dispensing hundreds of millions of dollars each year to “advance the frontiers of research in mathematics and the basic sciences.” Their projects are wildly ambitious and far-ranging: from Math for America, a nonprofit supporting high quality math and science teachers in New York City schools, to global initiatives investigating the mysteries of the brain, of autism, of ocean ecology and the origins of the universe.

The couple met when she picked up a summer gig from Stony Brook’s job placement office, a month as nanny to the then-math department chair’s three kids. Simons' marriage was over, he was charming, and she, a 22-year-old undergrad, fell in love. They married in 1977, and had two children, and while she raised them she earned a doctorate in economics. And he would leave his job as chairman of the math department to found a firm that in 1982 became Renaissance, one of the country’s pioneering quantitative investing funds.

Today, the Simons' name is on buildings and research centers of math, medicine, neuroscience and computational science from Stony Brook to MIT and UC Berkeley, the universities where James Simons, a noted mathematician, received his undergraduate and doctoral degrees. In 2013, the couple created their own in-house research entity, the Flatiron Institute, which pursues computational advances to aid scientific research. A foundation in the name of their son Nick, who drowned on vacation in 2003 at age 24, funds rural health care in Nepal.

In April, Marilyn Hawrys Simons, 68, stepped out for a solo turn, gifting $25 million in her personal funds to the Stony Brook Economics Department that granted her undergraduate degree in 1974 and a doctorate a decade later.

“This is the first time that I’ve made a gift just by myself,” she said in an interview in her office at the Simons Foundation building in the Flatiron District in Manhattan. “Jim and I usually do everything as a team so this was a deviation from the team and reflected my interest and not his.”

“I find everything we do at the foundation interesting, but he’s said he’s not interested in everything I do,” she said smiling, adding about her gift, “I feel my first focus is just plain helping the department grow and be stronger.”

Her gift will establish a new Center for Applied Economics and Public Policy, funding professorships, department programs and supporting doctoral students who are women and underserved minorities. The gift follows hundreds of millions of dollars already donated to the university, including funds to establish the Simons Center for Geometry and Physics and a medical research and care center.

In its oft-told origin story, the foundation was founded 25 years ago in 1994 at Marilyn Simons' suggestion, and resided for five years in a file box in her dressing room. Twenty years ago, she was diagnosed with breast cancer, later surviving a second cancer diagnosis as well. She decided then to establish a more secure grounding for the philanthropy, moving the foundation into a small office with a few employees. Its growth into a multibillion-dollar philanthropy came faster and bigger than either had expected.

“We started with $1 million … Jim’s business was good but it really took off by 2000, it was in high gear,” she said, explaining that because the foundation’s endowment was invested in Simons’ hedge fund, they “really took off together and became much bigger than we expected. It all happened much faster than we imagined.”

The foundation employs a staff of 330, with plans to expand to 500 possibly by 2022. Simons said the staff would include about 300 in-house scientists, 100 staff members to focus on grants for recipients outside the organization and 100 staff for foundation operations. “So it is a lot of growth,” she said.

The Simons, as well as Jim Simons’ two surviving children from his first marriage, Liz and Nathaniel, have signed the Giving Pledge, an initiative started by Microsoft’s Bill Gates and investor Warren Buffett that enlists billionaires to give away half their income in their lifetime or after.

Neither Marilyn Simons nor her husband grew up in the superwealthy class. James Simons' father sold shoes manufactured in his father-in-law's shoe factory, and his mother was a homemaker. Marilyn Simons said her mother Violet was never happier than when she heard her daughter had a job, whether at the Kosher Deli or as a Howard Johnson's "fish fry girl." The eldest of two girls and a boy, she was a graduate of the all-girls Academy of St. Joseph in Brentwood, and was the first female in her family to attend college.

She lived in a brick house that her father Walter and his fellow bricklayers built in his hometown of Brightwaters, near Bay Shore, and she would see him worry about the ups and downs of his business, which employed “a lot of family and friends.” On weekends she would sometimes walk his job sites with him, including big jobs from Stony Brook University to the Shoreham nuclear plant.

“I’d have a thirst to learn about this,” she said. “Even now my daughter likes to ask me if I were going back to school now, what would I study.” Her answer might be business, she said, “I love business, watching things grow.“

Her nonprofit work reflects the desire to have impact, while “allocating scarce resources. I do love efficiency. I love those kinds of problems to solve.”

In her down time, Simons says, she solves crosswords and KenKen math puzzles and practices juggling. “I am beginner level.”

It has taken her a while to solve the puzzle of being a billionaire, growing from someone who didn’t like to spend more than $100 for a dress to someone who enjoys the pleasures money can buy.

“At first I always wanted to make sure I didn’t get too comfortable, because life is full of changes,” she said, “and I didn’t want to take anything for granted.” In time, she adjusted.

“You have to have a healthy balance,” she said. “Not being silly when you spend money but to also not miss the opportunity to enjoy life.”

When the next boat was even bigger, she said, “I told him he’d probably have to get a different wife because that wasn’t me. But,” she concluded, “I definitely got to enjoy it.”

The 222-foot superyacht Archimedes was delivered from the Netherlands in 2008, and has taken them from the Arctic’s Northern Passage to the tip of South America’s Tierra del Fuego. A crew member wrote on a yachting website how the owners create a family atmosphere and invite the crew to join in the activities, whether watching glaciers calve in Greenland or diving in French Polynesia.

“When he got one of his boats, I said how did you get ideas like these? You grew up the same way I did,” she said, laughing. “It’s been an adventure.”

Despite the debate and unease in some quarters over billionaires setting the nation’s research agenda, she believes there is a role for philanthropists that complements the role of government, in that private funding can go to riskier, more speculative initiatives. “I don’t have that aversion to taxation” or to government, she said. “I lean politically Democratic and I know you have to pay for things some way. Becoming a more equitable nation would be great.”

Her husband left an active role at his hedge fund a decade ago, where he was a pioneer of quantitative investing, which uses mathematical models to predict financial market outcomes and make trading decisions. The company had its own disputes with the government over tax strategies that reduced its tax bill by billions of dollars. He deals with the science of the projects the Simons choose to focus on, while she oversees Simons Foundation operations, finances, human resources, intellectual property and legal issues, and communications. She is involved with ongoing projects, such as an upcoming film on human gene editing called "Human Nature," which the Simons helped produce through a new documentary film studio their foundation supports.

The couple now live and work in Manhattan but still own their home in East Setauket and their ties to Stony Brook, where a gym is named for her father, remain deep. She mentors outstanding female students from diverse backgrounds there as part of its Women’s Leadership Council.

Beyond its campus, she is chairman of the Cold Spring Harbor Laboratory, another beneficiary of the foundation’s largesse, and envisions an event drawing Long Islanders’ attention to the “jewels” in their backyard: the university, the laboratory and Brookhaven National Laboratories, which conducts basic research into nuclear and particle physics.

“I always loved math but having a second chance in life to learn science has been a gift to me,” she said, noting she was not the most outstanding student the first time around. “If I were to return to school, I’d work hard.”