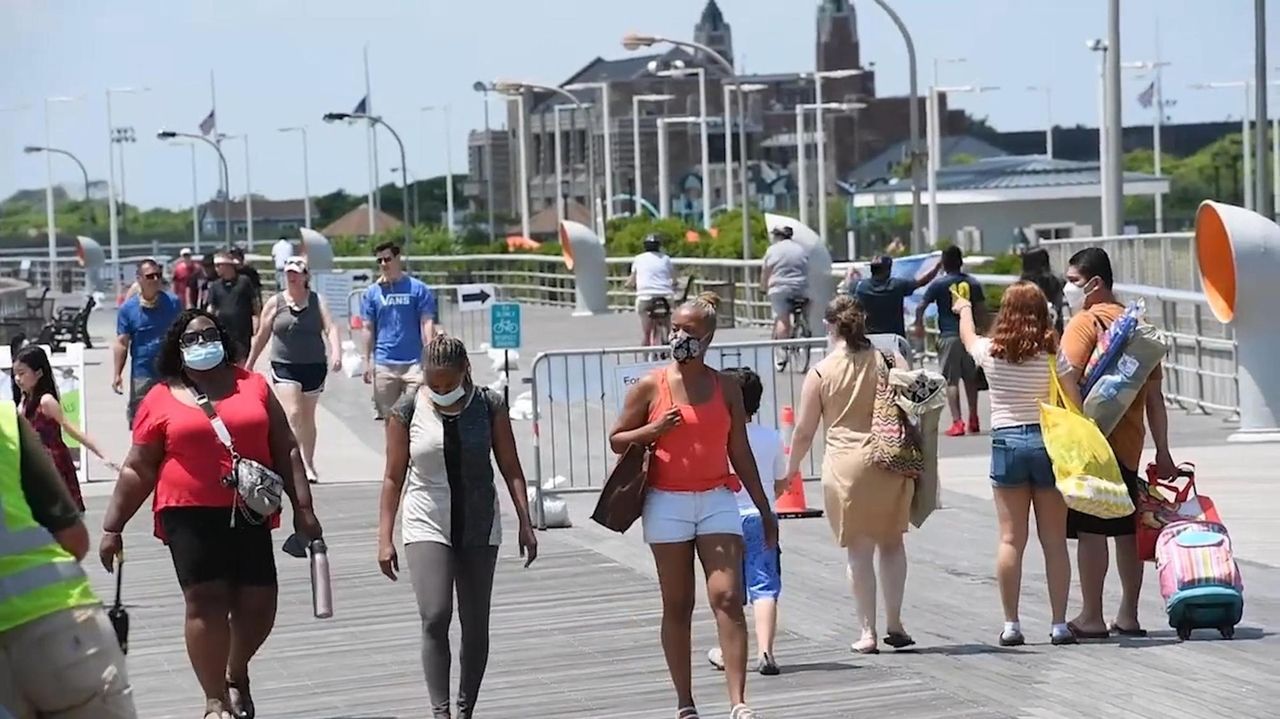 The coronavirus pandemic is not over, according to experts. Local officials weighed in on the importance of remaining vigilant with regards to social distancing and wearing a mask. Credit: Newsday staff

Months after Gov. Andrew M. Cuomo ordered New Yorkers to wear masks in public places where social distancing is not possible, local police and public safety officials said they have relied primarily on persuasion — not fines or other law enforcement measures — to ensure the public health directive is carried out.

The executive order, made in spring and renewed monthly, can be enforced through the state’s public health law. Violation of that law is a misdemeanor punishable by a fine of up to $1,000, probation or up to three months in jail. But of more than a dozen municipalities and police agencies surveyed, only Suffolk County police said they had issued summonses or tickets for violations of Cuomo’s order. A department representative said police had issued one summons in Port Jefferson, for violating the order, and two tickets under New York State public health law in Wyandanch and Shirley, all in April.

“We continue to work with other county agencies to provide a safe environment for the public,” he added.

Cuomo, announcing new COVID-related regulations for bars and restaurants on July 16, addressed problems with enforcement and compliance generally: “There’s tension with police departments and ongoing demonstrations after Mr. Floyd’s murder. I understand that. But we can deal with that situation and still enforce the law.”

Local governments, he said, “need to be diligent,” even in the face of popular opposition. “I’ll tell you what’s less politically popular: if we have to close down a region because compliance wasn’t done,” he said.

Brian Higgins, adjunct professor at John Jay College of Criminal Justice in Manhattan and former chief of police in Bergen County, New Jersey, said many officers he spoke to — already under strain after months of protests — wanted no part of enforcement.

“People are really on edge,” Higgins said. “They’ve been locked up, they’re nervous about this virus, nervous about what’s going on in our country,” he said. “It would be one more negative interaction with the public that the police are not on board with right now.”

He also pointed to the apparent contradiction of adding to police responsibilities even as a movement to defund police has gained traction and some prosecutors have announced they would drop protest-related charges.

“If they’re doing that in protests, what do you think is going to happen with summonses for masks?” Higgins asked.

Cuomo’s executive order does not include enforcement details, and one local official said that has led to confusion over implementation.

“We’re not even sure as to what the path is for enforcing” mask rules, said Southold Police Chief Martin Flatley. “It’s kind of unclear coming down from the state.”

Amityville Village Police Chief Bryan Burton said his officers have received calls about people not wearing masks at restaurants but have not issued summonses. It’s not always clear whether a group of people at a table are family or not, he said, and officers have limited enforcement power beyond dispensing what he called a “fatherly lecture ... At the end of the day, you don’t really have a whole lot of [legal] backing.”

Merchants have been enlisted to help ensure compliance. Patchogue Mayor Paul Pontieri said when customers of village businesses have been seen without masks, public safety officers speak to the business owners and warn them that they will be cited if it happens again.

“They react pretty quickly when we make that call,” Pontieri said.

A Cuomo official noted that the governor’s order does carry an enforceable civil fine but that the administration is encouraging local authorities to use persuasion and education first.

“We did encourage police departments to use education instead to encourage” people to comply, spokesman Rich Azzopardi said. If a person “becomes unruly,” then police certainly can choose to ticket him or her, Azzopardi added. The administration has been encouraged by the rate of compliance with the mask order, he said.

The press office for the state Department of Health did not respond to interview requests.

Though municipalities elsewhere in the country have passed local ordinances requiring face coverings, none on Long Island appears to have done so. Oyster Bay Town spokesman Brian Nevin wrote in an email that the town’s Public Safety officers can ask the public to wear masks but don’t have legal authority to enforce state laws, so they cannot issue summonses or fines. There is no provision in town code about wearing masks for them to enforce, Nevin said.

Wearing a mask in public when distancing is not possible reduces the spread of COVID-19, according to the Centers for Disease Control and Prevention. The coronavirus is commonly spread through respiratory droplets produced when people talk or cough that can be inhaled or land in the noses or mouths of others; masks block transmission of those droplets, the CDC said.

Dr. K.C. Rondello, a disaster epidemiologist at the College of Nursing and Public Health at Adelphi University in Garden City, said many or even most people who have the virus may not be aware they are carriers, making mandatory mask rules an important public health tool.

While Rondello said most of the public appears to be wearing masks, Long Island has seen some very public exceptions. Southampton Town police said that on July 9 a Riverhead man punched a woman after she asked him to put on a mask while the two were riding a Suffolk County Transit bus. She was treated for a cut, and he was arrested for assault. And Long Island Rail Road passengers told Newsday earlier this month that some riders and some of the railroad’s own conductors were not covering up.

Sometimes it’s the authorities themselves whose mask wearing is called into question: Southold’s town board has hired an outside law firm to investigate the police department’s response to complaints about a retirement party for a sergeant where guests were not wearing masks or social distancing.

Eight Smithtown-area elected officials, including Congressman Lee Zeldin (R-Shirley), posed maskless and shoulder to shoulder with firefighters and residents in a photograph accompanying a July 8 town news release about an awards event. Smithtown spokeswoman Nicole Garguilo said the officials had worn masks and put them on again after the picture was taken.

Wearing a mask is not only a matter of public health, it has become a political act that is highlighted repeatedly at rallies and gatherings.

At Black Lives Matter marches across Long Island this summer, most participants have worn masks, though few have socially distanced. At two pro-police rallies in Smithtown this month, both attended by town and police union officials, most participants did not wear masks or maintain a social distance.

Suffolk police announced July 8 in a release about public protest procedures that, with few exceptions, participants would be “required” to wear them when unable to stay 6 feet away from other people. Nassau County Executive Laura Curran released similar protocols earlier in the month.

Virtually all the officials surveyed said that when they encountered people disobeying the governor’s order, their first response was to simply ask for compliance. Police and public safety officers from some Long Island departments even carry masks to give away. In Smithtown, which has a public safety department, “There hasn’t been a case where anyone has refused or objected,” Garguilo said. “Usually, they accidentally forgot to put it on and quickly do so. We also keep surgical masks on hand in the event someone needs one.”

Officers from all of the agencies surveyed have been directed to wear masks themselves when interacting with the public, and for some of them, enforcement of mask and distancing rules is personally significant. George Banville, commissioner of the Kings Point Police Department in North Hempstead, attended the funeral of Sands Point police Sgt. Joseph Spinosa, who died of coronavirus in April. That “hit home hard,” and his officers take distancing rules seriously, Banville said.

For some agencies, enforcement of mask rules adds to the burdens of an already busy summer season.

“It takes a tremendous amount of time and resources,” East Hampton Town Police Chief Michael Sarlo wrote in an email. His officers are requesting compliance on their foot and bike patrols and working with other town employees to monitor businesses for compliance, he said.

Southampton Village Mayor Jesse Warren, whose population swells during the summer, worried enough about potential spread from maskless visitors to ask for additional enforcement personnel from the New York State Department of Health and the state Liquor Authority.

“I’ve spoken with the governor’s office … and we’ve asked for the maximum possible support to get some help down here,” Warren said.

Particularly worrisome, he said, were potential “super-spreader” gatherings like the June 27 “Southampton in the Streets” event to promote outdoor dining and retail. People complained over social media that attendees did not wear masks and ignored social distancing protocols, and Warren said others reported that police did little to enforce those rules.

Warren said that while businesses in his village are doing “a really good job” asking customers to wear masks before entering, many people are not wearing them when they walk down village streets.

“You see people not wearing masks and they’re not socially distancing, either,” Warren said. “Some people are extremely conscious of wearing masks, but then you have pockets of people who just don’t do it.”

Executive order / Gov. Andrew M. Cuomo’s directive states that: “Any individual who is over age two and able to medically tolerate a face-covering shall be required to cover their nose and mouth with a mask or cloth face-covering when in a public place and unable to maintain, or when not maintaining, social distance.”

Enforcement / The order may be enforced under New York State Public Health Law. Violation of the law is a misdemeanor that can result in imprisonment, probation or a fine upon conviction.