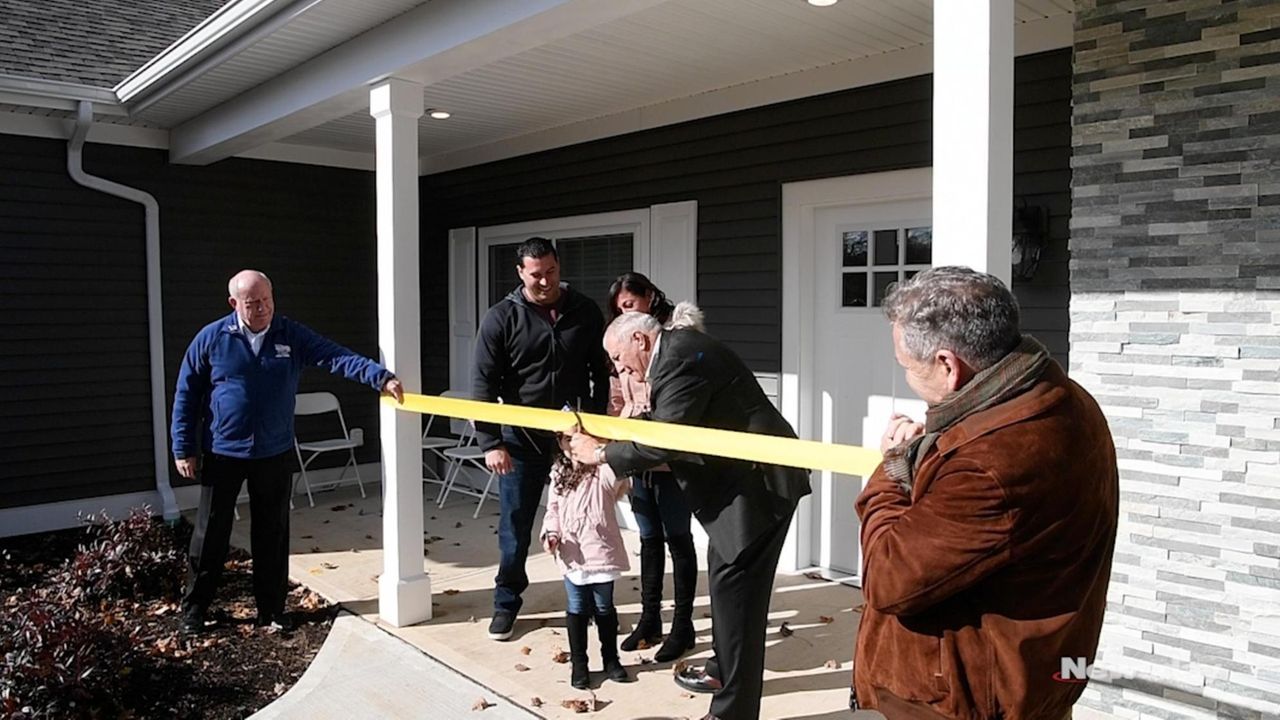 Matias Ferreira lost portions of both legs while serving as a Marine in Afghanistan in 2011. On Saturday, in a fitting expression of gratitude on this Veterans day weekend, the 29-year-old Suffolk County police officer received a home in Smithtown customized for his needs, a gift from the national nonprofit Homes For Our Troops. Credit: Newsday

Matias Ferreira raised the Stars and Stripes in his front yard Saturday morning and, with his wife and daughter beside him, stepped through the front door into a new, improved place to call home.

Ferreira, 29, a Suffolk County police officer, lost portions of both legs while serving as a Marine in Afghanistan in 2011. With determination and resolve, he adapted to wearing prostheses and muscled his way through the police academy, becoming an officer last year.

On Saturday, in a fitting expression of this Veterans Day weekend, he received the home in Smithtown especially built for his needs, a gift from the national nonprofit Homes For Our Troops.

Ferreira, a gregarious man, said he rarely is at a loss for words. But as he toured the one-story, four-bedroom house, customized with some 40 special adaptations for him, he acknowledged he could not find enough words to express his gratitude to everyone.

"Thank you so much," he said, noting that the family plans to move into the house over the next week. "It was such a beautiful expression. … So many veterans were not given a welcome or treated with respect when they came home."

Ferreira prides himself on being able to do everything required of a police officer without needing any assistance. From his movements, one would never know he wears titanium prostheses.

It's when he comes home and removes his artificial legs that the challenges arise. He gets around on a wheelchair but needs wider doorways to accommodate it.

"Sometimes I'd have to crawl from one room to another," he said. That could be when he gets up at night to check on his 3-year-old daughter, Tianna, or simply to grab a midnight snack from the fridge. "My wife picks up a lot of the slack."

Tiffany, his wife, swore she wouldn't cry on Saturday, but that didn't last.

"It's an invaluable gift," she said. "We're looking forward to making this house a home."

The handing over of the house key was accomplished with pomp and ceremony that transformed the quiet street. The celebratory touches included a  motorcycle escort, a flag-carrying honor guard, local police and fire officials and speeches. A few hundred people were on hand to welcome the family.

Dick Cody, chairman of Homes For Our Troops, said the Ferreiras' home was the 271st that the charity has built for disabled vets.

"We build homes, and we rebuild lives," said Cody, a retired four-star Army general. "We want to give them back the freedom they fight for every day."

Cody also told the assemblage more of Ferreira's life story. He was born in Uruguay and his family moved to the Atlanta area when he was a child. Though he was a star athlete, he chose to join the Marines.

Months into his first deployment in 2011, the lance corporal stepped on a 30-pound improvised explosive device in Helmand province, Afghanistan. He lost portions of both legs and broke his pelvis.

After coming back to the States, he decided to become a Suffolk County police officer.

Watching Ferreira and his family appreciating their new house, Scott Brown, whose St. James company built it, shed a few tears of joy. He and Ferreira connected the moment they met, he said.

"We talked for 45 minutes, telling all kinds of stories," he said. "He deserves every inch of this house."

The home is a wonder of accessibility. The kitchen counters, stove and sink are low enough for Ferreira to reach in his wheelchair. The closets have special racks that lower so he can get his clothing. The rooms are wide enough for a wheelchair to turn around in, and the doorways are extra wide.

"When everybody leaves here," said Brown, "there's a tractor trailer down the street with $80,000 worth of furniture and TVs, all donated."

LI vets: Wars they fought and how they live nowThere were an estimated 18.5 million military veterans living in the United States in 2016, about 7.4 percent of the population, according to the latest figures from the Census Bureau's American Community Survey. Of the 18.5 million nationwide, it is estimated that more than 112,000 live on Long Island; approximately 45,148 in Nassau County and 66,867 in Suffolk County.