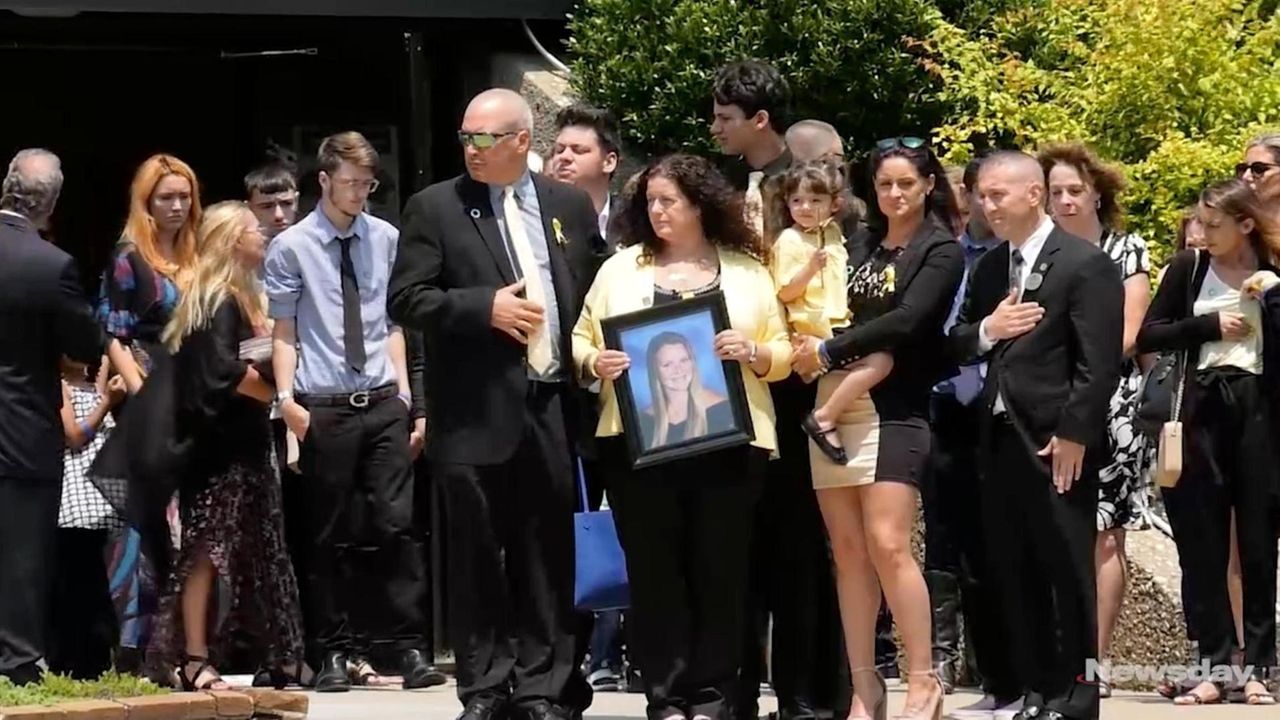 Family, friends and community members attended a funeral on Saturday for Melissa Marchese, who died from injuries suffered in a car crash on June 13. Credit: John Paraskevas

As the Rev. Thomas Tuite Saturday spoke at a funeral Mass a few dozen feet from the coffin of Melissa Marchese, the Shoreham teenager who died June 14 from injuries suffered in a car crash, he said Marchese lives on – on Earth in the bodies of five people who received her donated organs after her death, and in heaven with God.

“She has inherited the promise of eternal life,” Tuite told the hundreds of mourners gathered at the Roman Catholic Church of St. Mark in Shoreham.

Marchese, 18, was riding in a car that was struck June 13 by a vehicle that ran a red light, police said. She was on her way to a senior recognition ceremony at Shoreham-Wading River High School, where she had been scheduled to graduate June 28.

Marchese’s father, Charles Marchese, said in a message read Saturday by Tuite that “my angel suffered an unsurvivable brain injury. Yet she [donated her organs] … in order to save the lives of five people. She is my miracle. She is my hero. In the end she always wins. The amount of love and pride I feel is immeasurable. The only thing larger is the amount of pain I feel without my angel.”

Marchese said in the message that the family is awaiting information on the age and sex of each organ recipient, and which organ each person received.

Tuite said a part of Marchese’s daughter also was present in people who grieved for her. He spoke of her sincerity, trustworthiness, nonjudgmental attitude, and "her infectious laugh and her smile," asking those in the church to ponder “how she enabled you to be the person you are seated here this morning; those things she would do for you, those things she would say to you.”

“The world is indeed a better place because of the love and the joy that Melissa brought to each of us,” he said.

Later in the service, Tuite prayed that “may we who mourn be one day united with our beloved Melissa. Together we will meet Christ Jesus, in our forever home … and at that time any tear will be wiped away.”

Referring to the night of the crash, Tuite said that “at a time like this, we wonder where God was.”

Marchese, in heaven, now “knows not only the questions but she has the benefit of knowing the answers,” Tuite said. “We are left with just the questions.”

Marchese recently attended orientation at the University of Hartford, where she planned to major in early childhood education, Hartford's president, Gregory Woodward, wrote in a letter posted on the university’s website:

“She has been recognized for her outstanding academic and athletic achievements” and was to join Hartford’s Division One softball team."

Outside the church Saturday were balloons with the numbers 2 and 6, and at least one car with “26” written on the rear window — Marchese’s uniform number on the Long Island Crush Fastpitch softball team.

Police said Marchese sustained major head injuries when the Hyundai Elantra that carried her and two other teens was struck as it turned left from southbound Miller Avenue onto Route 25A by a Honda Accord that traveled through a red light while going west on 25A. Two passengers in the Hyundai, and its driver suffered non-life-threatening injuries, police said. Police have said they do not plan to file charges but could not speak for the district attorney's office. The district attorney’s office could not be reached Saturday to comment.

Student athlete killed in crash 'was destined to do great things'

Friends and family of Melissa Marchese heaped praise on the high school student who died in a car crash last week.

Melissa Marchese, 18, was seriously hurt in a car accident on her way to a school ceremony and has died of her injuries, Suffolk police and school officials said.