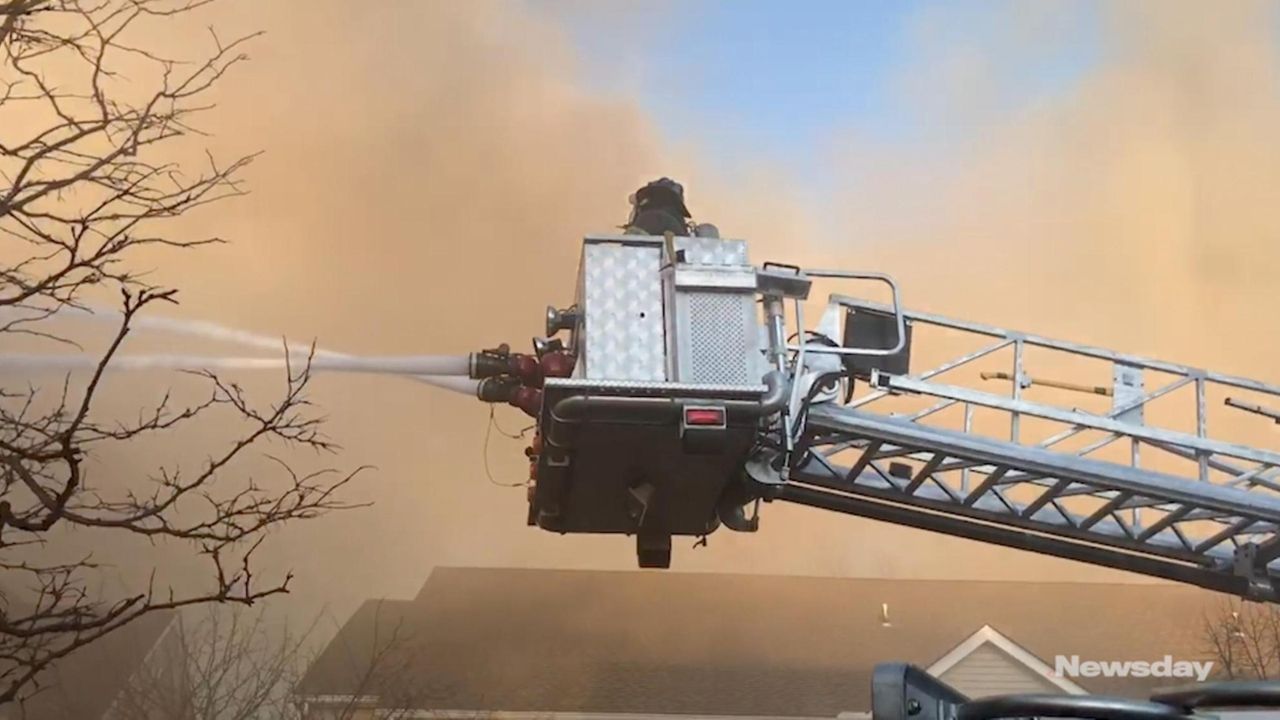 Personnel with 17 fire departments assisted in fighting a blaze that broke out at the Avalon Court Luxury Apartments in Melville at about 6 p.m. Saturday.  Credit: Newsday / Steve Pfost

A fire at a Melville apartment complex Saturday displaced up to 40 residents, officials said.

"The fire had a tremendous head start," Kaplan said. "We were on scene within a few minutes from the original call ... and there was heavy fire through the roof in more than one apartment."

By 9 p.m. the fire had been contained, but there were still hot spots. Kaplan said. A child was taken to a hospital by his or her parent with an unknown injury. A firefighter also sustained a minor shoulder injury, Kaplan said.

Overall, "between 30 and 40" residents were displaced, Kaplan said. The American Red Cross was on the scene Saturday night assisting residents left homeless.

Before firefighters contained the flames, residents who had been evacuated feared the worst, and some couldn't hide their emotions as flames appeared to be spreading on the windy night.

Resident Jennifer Phelps said through tears at the complex she escaped the fire in her building with her 1-year-old boy and fiancé. “We don’t have anything now ... we just have to watch our house burn,” Phelps said.

"I guess we should be happy that, you know, to have our life, but it is just too much," Phelps said. "All my work is in there, I am a professional makeup artist, so everything that I worked for is in there burning to the ground.”

Ellen D’Agostino, who also lives at the complex, worried her beloved Pomeranian pups were in harm’s way in a different building but still close to the flames.

“My dogs are in there,” she said, crying. “I want to get them out of there before it does get on fire. It’s windy out here."

Jessica D’Agostino, Ellen’s daughter who lives with her mother, shared her mother's worry about the dogs, Casper, 9 months old, and Jasper, 2. “The dogs are in there by themselves — they’re helpless,” Jessica said.

Later that night, a relieved Jessica D'Agostino walked her two dogs on their leashes.

"We got them," she said, flashing a big smile.