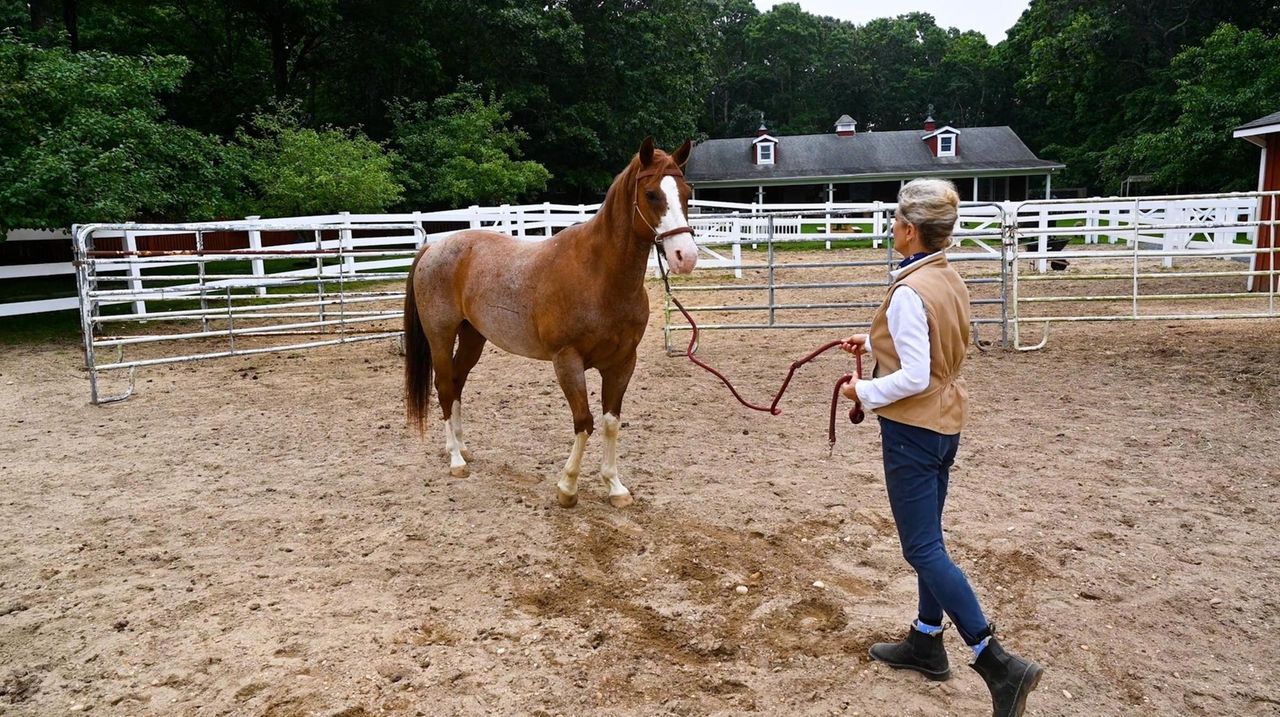 Mental health counselor Karin Yapalater said she saw an increase in demand as clients relocated to more natural environments on the East End during the pandemic. Yapalater spoke with Newsday about nature-based therapy. Credit: Gordon Grant

New York City therapists relocating out east, advances in telemedicine and additional Stony Brook University psychiatry residents have improved the landscape of mental health services on the Twin Forks during the COVID-19 pandemic.

Those changes may permanently strengthen the web of counselors, psychologists and psychiatrists working on the East End even as the threat of the virus ebbs.

Part of the change was born of necessity. A common thread among all providers Newsday spoke to is that clients across the socioeconomic spectrum are more in need of their services than ever.

"I can tell you this, every single person I know in this field is just inundated with people who are in different states of distress, stress and panic," said Robby Stein, a Sag Harbor psychologist. "And within my own practice … there’s been an increase in depression, suicidal ideation and a need for really outside stimulation that doesn’t exist."

The number of people reporting symptoms of anxiety and depression has remained high across the country even as restrictions are lifting and fewer people are dying from virus-related complications. The number of adult Americans reporting anxiety was around 26% in mid-June, with 21.6% reporting symptoms of depression, according to the U.S. Census Bureau’s Household Pulse Survey. Those numbers stood at 8.1% and 6.5%, respectively, in 2019, according to the survey. The demand for mental health services has risen everywhere, including the East End.

For private-pay therapists serving the area’s wealthier residents, client stressors included being forced to adapt to remote office work while their children were isolated from their peers and relocating from New York City in search of fewer crowds and more space.

Karin Yapalater, a counselor with an office on Park Avenue and in Bridgehampton, sought refuge on the East End during the pandemic as many others did. She said she has been very busy during the pandemic in part because she offers nature-based therapy that can involve horses. Outdoor sessions were a respite for clients suddenly hunkered down on the East End with their families, Yapalater said.

"When people were living in such close quarters together, getting outside and looking and talking and being able to observe horses and interact with horses, just became such a relief for them," she said. "And it was a safe way to engage in therapy."

Any problems families or couples were previously facing magnified during lockdown and new ones arose, like executives suddenly struggling with time management, she said.

"These were families that that [finances] wasn’t so much the problem, it was more about how to balance out the day," she said. "Also the behavioral issues that come up with children when they’re not socializing."

Working on Long Island allowed Yapalater to safely see her patients in person on the farm, but it also added one more therapy option for South Fork residents looking for a new therapist during the winter months.

An 18-year-old client, who lives in East Hampton and asked not to be identified due to the lingering stigma associated with mental health treatment, began therapy with Yapalater in January and said it changed her life for the better. The woman, a longtime East End resident, said she travels 80 miles to Glen Cove to see a holistic doctor who is administering ketamine to treat her depression and anxiety. She said she was grateful for an opportunity to work closer to home with Yapalater.

"I had such a hard time finding someone who was willing to listen and be there for me," the woman said. "She has helped me through breathing techniques and just changing the way I view things. I’m forever grateful for that."

Stacey, who asked not to be identified by her last name, was living in New Jersey and has been in her East End home since the pandemic began. She had been working with Yapalater for three years, both in Manhattan and in the Hamptons, and said having her therapist out east allowed her to partake in horse therapy during the COVID-19 lockdown.

She described Yapalater as a top-tier provider and sees her presence as part of a larger improvement in East End health care. Stacey said their sessions during the pandemic have her feeling calmer and better about herself than ever.

"Everyone always complains that they didn’t think doctors were so good here — you have to go to New York City," she said. "But let me tell you, I found a great internist out here. I think it’s getting better. I really do."

Yapalater said she noticed a similar shift in clients and providers moving out east following the 9/11 terror attacks in 2001, when New Yorkers sought respite from the city. Only time and the availability of remote work will tell whether the population stays long term, permanently increasing the demand for mental health care and by necessity, the supply, Yapalater said.

"I think that physicians, counselors, coaches, therapists, they’ve always been here," she said. "But there hasn’t been the same kind of a demand as there has been since the pandemic."

The proliferation of telehealth services has been especially meaningful on the transit-challenged East End. For example, it could help a student who cannot get a ride to a therapist’s office, local school officials said.

"The East End, I would equate it to a rural community in upstate New York," said Ralph Naglieri, East Hampton High School dean of students and a psychologist. "And that’s what people don’t understand."

The East Hampton School District provides an onsite social worker to counsel students two days per week through a partnership with Family Service League, an Islandwide social service agency, under the South Fork Behavioral Health Initiative. That program, along with the North Fork Coalition for Behavioral Health, are coalitions of elected officials, schools and service providers seeking to improve student access to mental health services on the East End. Each will receive $175,000 in state funding for the 2020-21 school year.

The Stony Brook Medicine health care system began using telehealth services at the beginning of the pandemic for emergency psychiatric care at its Southampton campus, said Kristie Golden, associate director of operations at Stony Brook Medicine. The change eliminated the need for someone experiencing a psychiatric crisis on the South Fork to travel to the main hospital for its Comprehensive Psychiatric Emergency Program, Golden said. Conditions that require emergency intervention include attempted suicide, substance abuse, depression, psychosis, violence or other rapid changes in behavior, according to the American Association for Emergency Psychiatry.

"It’s a huge step forward," Golden said. "The rollout of telehealth during the pandemic is the silver lining."

Outpatient telehealth calls rose from a few hundred per month to more than 20,000 per month during the height of the pandemic, Golden said.

The health care system is also launching a community psychiatry residency program in which five physician residents will begin their outpatient clinical rotations on the Twin Forks. There has long been a dearth of psychiatrists working on Eastern Long Island and this step has been in motion since before the pandemic, Golden said.

"This residency program brings a permanent expansion of available outpatient services to the East End, which will help address increases in need resulting from the pandemic," Golden said.

Family Service League is still offering 65% of its clinical services through telehealth. While the agency has also seen reports of substance abuse drop, that doesn’t mean the problem is lessening, according to Christian Racine, the organization’s senior director for clinics.

"A lot of that is because the courts have shut down. People haven’t been referred to treatment," Racine said. "Probation isn’t enforcing the same way. So we have people probably abusing substances as a way of coping who are hunkered down more, and they’re not being pushed into treatment. That’s a concern to everybody."

During the pandemic, Stony Brook has seen an estimated 15% to 20% increase in requests for substance-use disorder services through Riverhead-based Quannacut, which offers in-patient and out-patient addiction services, according to Golden.

Stony Brook’s three emergency departments, including the two on the East End, implemented medication assisted treatment for people with opioid-use issues that combines medication with therapy or counseling, Golden said.

Barriers remain for some residents

People on the lower end of the East End’s economic spectrum, particularly those who are not native English speakers, still have barriers to obtaining mental health care.

Racine said the agency would like to expand its bilingual services on the East End, possibly by using virtual services to reach people who need mental health assistance on the farther reaches of the two forks. Minerva Perez, executive director for OLA of Eastern Long Island, an immigrant advocacy group, said she expects it will take a long time to completely address the mental health issues that arose from the pandemic, particularly for East End Latinos. Lack of trust in the system, stigma and personal finances can also be obstacles in obtaining care, she said.

"This is setting back people economically, meaning also emotionally and the rest of it," Perez said. "For years and years. We see this as a long-term thing. We see this as easily a generation of deep support that’s going to be needed out here."