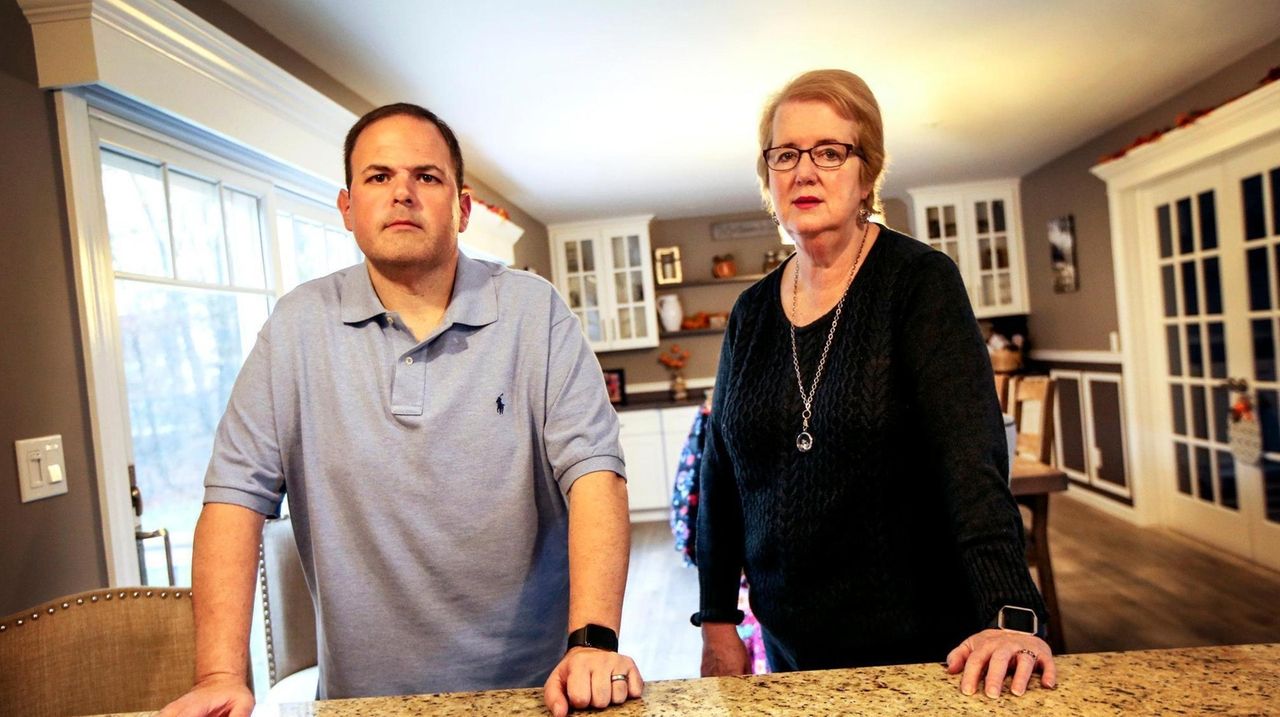 David Pfister of Middle Island on Nov. 20 detailed vibrations felt for the past 18 months at his home, which he suspects are connected to a nearby sand mine. Credit: Newsday / Vera Chinese

A pair of Middle Island residents are searching for the reason why their homes have been intermittently vibrating for the past 18 months and suspect a connection to a nearby sand mine.

The state Department of Environmental Conservation, PSEG Long Island and representatives of the sand mine, Coram Materials in Miller Place, have been investigating the matter but have so far been unable to pinpoint the cause or definitively say if there is a correlation.

The neighbors say they are certain there is a connection between the mine and the vibrations as the problem did not occur last winter during a time when mining activity was dormant.

“We understand everyone’s frustration,” a Coram Materials representative said in an email to the residents on Nov. 25. “We have been trying to work through a process of elimination to find the source of the problem.”

Coram Materials, which at 272 acres is the largest of Long Island’s 23 sand mines, overhauled its sand excavating system after its mining permit was renewed in March 2018, said the company’s Syracuse-based attorney Kevin Brown. That included adding a second dredge and switching from diesel to electric grid power. The company also added a two-mile long conveyor belt, according to a video testimonial posted to the equipment manufacturer’s YouTube page.

At least two neighbors, David Pfister and Steve Bishop, soon after noticed vibrations and rattling in their home and Bishop said he has noticed changes in the air pressure on his property. Pfister, who works in IT management and often works from home, noticed the vibrations occurred between 7 a.m. and 4:30 p.m. on weekdays and suspected there was a link between his shaking home and the Miller Place-Yaphank Road mine. Both have lived in their homes — which are several hundred feet from the 30-year-old operation — for 15 years and said they never experienced the effects before.

Pfister contacted the state DEC in November 2018 to investigate the matter.

A DEC spokeswoman said the agency is still working with PSEG and Coram Materials to determine the cause. “As always, we encourage anyone with additional information or concerns to contact DEC,” she said.

A PSEG spokeswoman said the problem did not appear to be on the utility’s end.

“There are no issues with our equipment. We have tested and there were no problems with the voltage readings,” she said in an email. “We have never come across the electric distribution system causing vibrations.”

Coram Materials last year commissioned a seismograph study, but the study did not record any ground vibrations. Brown said the next step will be for the company to seek proposals from an acoustical engineering firm to further evaluate the issue.

Meanwhile, both Bishop and Pfister said the shaking is unbearable at times and have noticed cracks in their walls and nails popping out of Sheetrock. They are both anxious to see it resolved.

Coram Materials, a sand mining operation in Miller Place, switched from a diesel-powered operation to one powered through the electric grid in spring 2018.

Neighbors noticed vibrations in their homes soon after and notified the state Department of Environmental Conservation.

The company commissioned a seismograph study in November 2018, which did not detect ground vibrations.

The company said it is seeking an acoustical engineering firm to conduct another study and continues to investigate the issue.