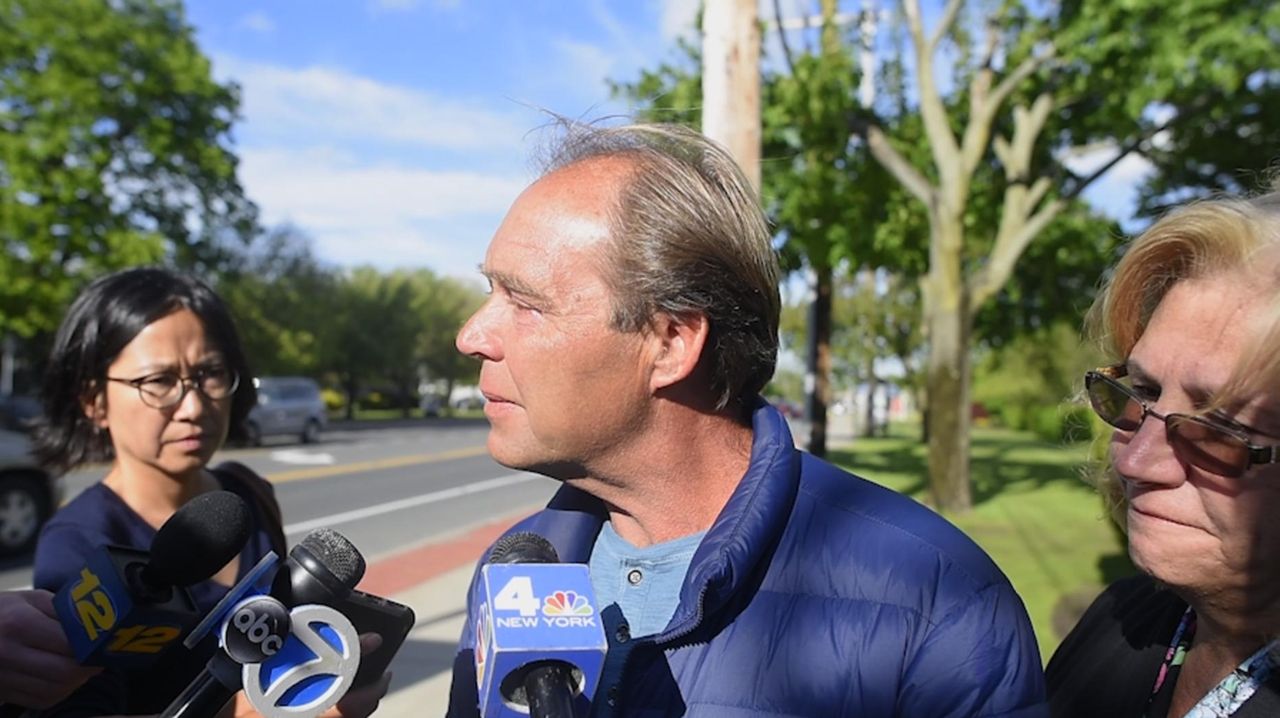 A Lindenhurst woman’s split-second decision to save her daughter’s life at the expense of her own Sunday morning as an out-of-control car careened toward them “was a beautiful thing,” her husband said Monday.

“She gave up her own life for her child,” Kenny Aluska said of his wife Diane’s final act of shoving their daughter Jenna, 16, clear from the path of the Toyota Corolla just before it struck the Babylon Town employee.

Diane Aluska, 55, was pronounced dead later Sunday at Good Samaritan Hospital Medical Center in West Islip, where her daughter is recovering from injuries she sustained in the Lindenhurst crash.

Doctors inserted several pins in the back of the Lindenhurst High School 10th-grader and she will have to wear a back brace for the next six months, her father said.

His daughter did not learn of her mother’s death until Monday morning, after her surgery.

“I couldn’t tell her before she went into surgery,” Aluska said. “I thought it would be too traumatic, too devastating.”

Kenny Aluska was waiting for his wife and daughter to come home from church so he and Jenna could buy flowers for his wife to celebrate Mother’s Day. He then got a text from the teenager.

“There was an accident. Help,” he said his daughter wrote in the text.

When he got to the crash site on South Wellwood Avenue, Aluska learned his wife had died.

A short time earlier, the mother and daughter had been walking on a Lindenhurst sidewalk in front of 225 S. Wellwood Ave. when the 2005 Toyota Corolla hit Diane Aluska head on and clipped Jenna, Suffolk police said.

The driver, Ann Riolo, 80, also of Lindenhurst, had just backed out of a parking spot when she drove her 2005 Toyota Corolla in reverse onto the sidewalk.

Diane Aluska was pinned under the car until bystanders rushed to the scene and pushed the vehicle off her, police said. They administered CPR until responders arrived.

Aluska was at a loss Monday to find a suitable answer to explain the sudden death of his wife, whom he called an “amazing woman.”

“Why it had to happen is beyond me,” he said.

Police did not arrest Riolo, saying no crime had been committed.

Meanwhile, a day after Diane Aluska died, others who knew her, either from her job at the Babylon Town clerk’s office or from the family’s Lindenhurst neighborhood, remained stunned by her death.

In a Facebook post, Babylon Town Supervisor Rich Schaffer urged residents to pray for Diane Aluska’s family and relatives of the driver.

“Diane was a valued member of our town clerk’s office where she served residents of the town with dedication, compassion and a big smile,” Schaffer wrote. “We are keeping her daughter, Jenna, and her family in our thoughts and prayers.”

A candlelight vigil to remember Diane Aluska is planned for Friday night at the Lindenhurst Village square.

Members of the community are raising money to help the family pay for expenses such as funeral costs.

“That’s one less worry on their minds,” said Jennifer Aulino, 37, one of event’s organizers.