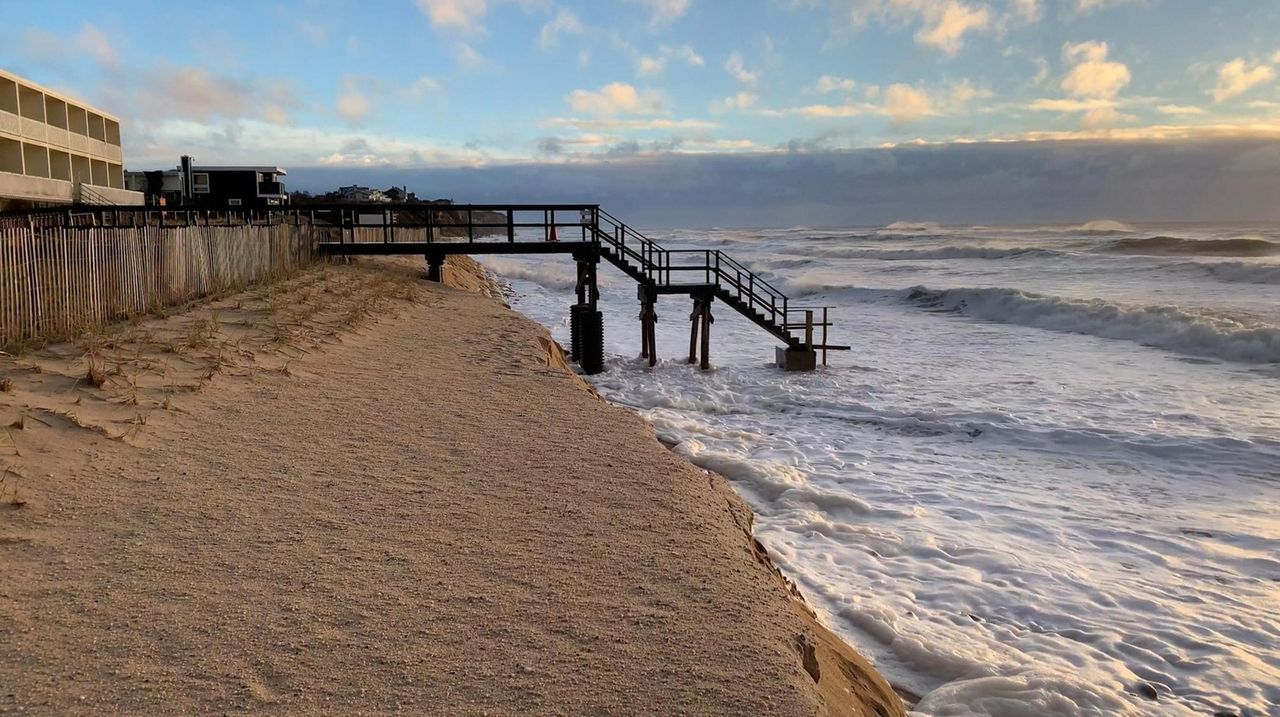 Buried sandbags intended to protect Montauk’s downtown from the Atlantic Ocean have been clearly visible on the beach since late summer, a reminder that sea level rise is a continuous threat to Long Island’s coastline. Credit: Doug Kuntz, Gordon Grant

Buried sandbags meant to defend Montauk’s downtown from the Atlantic Ocean have been clearly visible on the beach since late summer, an earlier start to seasonal erosion that underscores the need for a more permanent solution to stabilize the shoreline.

The first glimpse of the bags — part of an artificial dune installed by the U.S. Army Corps of Engineers as an erosion control project in 2015 — was in mid-August and again around Labor Day. Three months later, the exposure had visibly  moved inland about 10 feet and widened across the beach, making the area impassable unless one were to walk across the sandbags or through the water. In some sections, the front half of the dune has caved into the ocean, exposing a wall of orangish, quarried sand placed there by East Hampton Town last spring, although the dune has held up in other areas.

The sandbags were previously exposed, but before winter nor’easters hit the region. The town spent nearly $1 million to cover the artificial dunes in the spring as required under its agreement with the Army Corps, and probably must take on a similar project in 2019.

“The conditions on the Montauk beach are constantly changing due to storms, tides and normal process,” said Joanne Pilgrim, executive assistant to Town Supervisor Peter Van Scoyoc. “The town regularly monitors the conditions and responds to any potentially hazardous conditions by roping off and closing affected areas to the public on a temporary basis.”

The town’s Montauk Beach Preservation Committee is studying creating an erosion control taxing district. Those who benefit most from beach nourishment would pay its cost.

“It just continually reminds us that the project that was done is barely a short-term project and is just completely insufficient,” said Laura Tooman, president of Concerned Citizens of Montauk and head of the committee.

Town officials in September approved borrowing $200,000 for a pair of studies outlining funding feasibility, district boundaries and to conduct an engineering analysis of a potential $15 million to $17 million beach restoration project.

The work would be done in conjunction with a $1.2 billion Army Corps project to bolster the 83 miles of shoreline along Long Island’s southeast coast known as the Fire Island to Montauk Point plan, or FIMP.

East Hampton hosts a public hearing Dec. 6 on its Montauk hamlet study, a report that lays out a long-term planning vision for the area. It contains a bold recommendation to enact a “strategic retreat” of downtown businesses inland in response to continued sea level rise, among other strategies to preserve Montauk’s character.

Among those to speak is Kevin McAllister, founder of Sag Harbor-based Defend H20, a critic of shoreline hardening and a retreat advocate.

He described an approach relying on sand replenishment alone as a “Band-Aid” solution futile in the fight against Mother Nature.

“While they’re exploring beach nourishment, this could potentially prolong the necessary and appropriate move here,” McAllister said. “The planning component [of retreat], we can’t delay on that. The physical component will take years.”