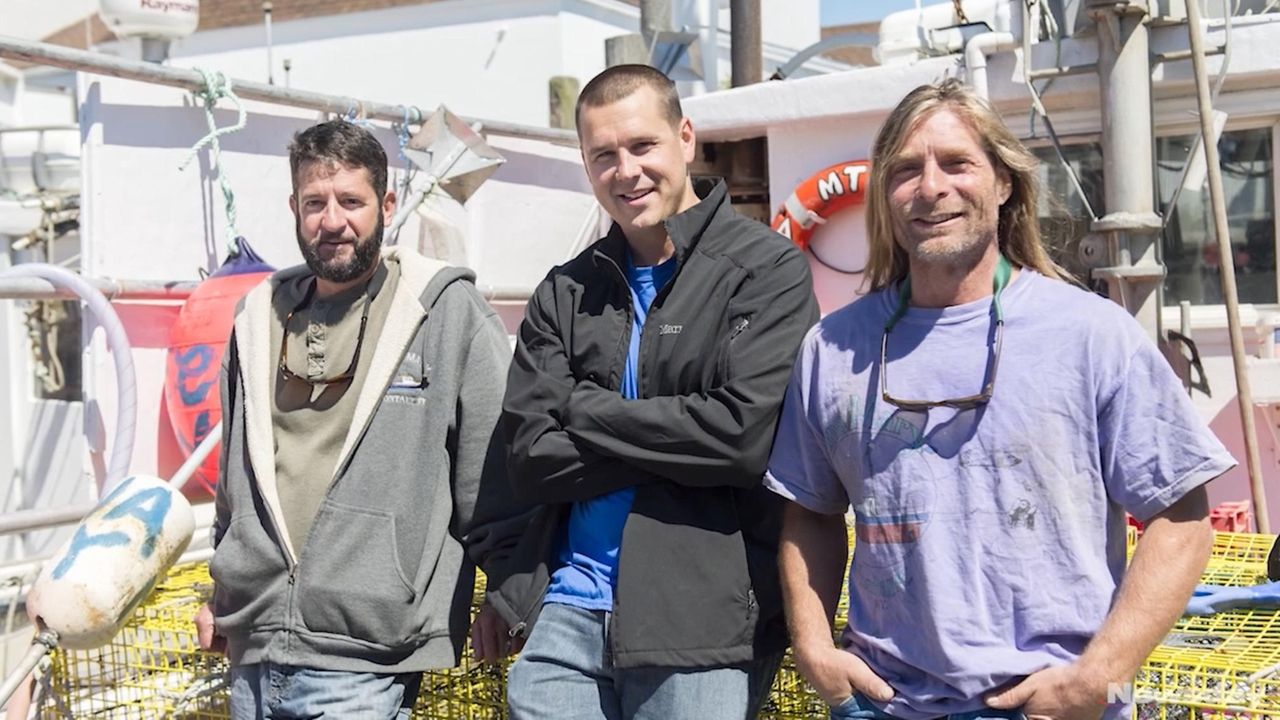 On July 24, 2013, John Aldridge, co-owner of Montauk lobster boat Anna Mary, fell overboard and spent nearly 12 hours fighting for his life. On Wednesday, May 3, 2017, he and the vessel's co-owner, Anthony Sosinski, spoke about Aldridge's ordeal, which will be detailed in the book, "A Speck in the Sea," scheduled for release on May 23. Credit: Gordon M. Grant

A story about a fisherman going overboard and being lost at sea rarely has a happy ending. Few communities know that better than the boating brotherhood in Montauk.

On May 23, when a book titled “A Speck in the Sea” is released, the East End fishermen already know what’s in the final chapter. Nearly four years ago, they lived it so one of their own survived to tell the tale.

“You don’t leave anybody out there, bottom line,” said Steven Forsberg, captain and owner of the Viking Fleet.

The story of Montauk fisherman John Aldridge, 48, and his co-captain Anthony Sosinski has traveled beyond Montauk’s dwindling but tight-knit commercial fishing family. Aldridge has been across the country giving inspirational speeches, the duo was profiled in The New York Times Magazine, their book comes out in a week in a half, and a movie is in the works.

“I’ve had people come up to me that I never knew in my life and they start crying when they realize it’s me,” Aldridge said earlier this month outside The Dock bar in Montauk, just a few feet from where the Anna Mary is docked.

On July 24, 2013, Aldridge flew backward off the deck of the Anna Mary when the handle of a cooler he was tugging on snapped. He landed in the Atlantic Ocean at 3:30 a.m., 40 miles from Long Island, while his co-captain, Sosinski, and mate, Mike Migliaccio, slept below deck.

Nearly 12 hours later — with Aldridge using his fisherman’s boots as pontoons and swimming from buoy to buoy — he was found by a Coast Guard helicopter making a last pass before it ran out of fuel. Nearly two dozen local fishing boats had mobilized to find a man they know as “Johnny Load.”

“I was thanking God for him that day,” said Terry Wallace, captain of Night Moves, who was about to take over for the night search when Aldridge was found.

Now there’s a sense of excitement in Montauk amid the impending release of the book written by Aldridge, Sosinski and a ghostwriter.

A talk and signing is scheduled for July 13 at BookHampton in East Hampton. A handful of customers have already preordered copies of the 262-page book, store manager Colin Bertram said.

“We’re a real town, we have real people with real lives,” he said. “It’s not just the make-believe you see on TV.”

For Aldridge and Sosinski, it’s back to the boat for lobster and crab. But the danger still hasn’t passed.

“It’s just part of the nature of the beast,” Sosinski said. “We know that it could be you tomorrow.”

‘A SPECK IN THE SEA’