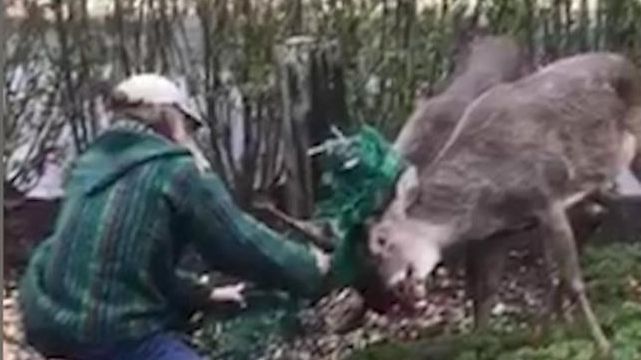 After Logan Erb said her pit bull noticed two bucks tumbling around her neighbor's yard in Montauk last Tuesday, Anthony Sosinski, a Montauk lobsterman who was nearby, helped the animals break free of the deer fencing that entangled them. Credit: Logan Erb

Logan Erb, 25, of Montauk, said her pit bull first noticed the two bucks tumbling around her neighbor's yard Nov. 20. The animals were joined by a piece of deer fencing that only seemed to tighten as they struggled to break free, so Erb ran to Sosinski for help.

"He grabbed a knife and just went after them," said Erb, who was recording the encounter.

Sosinski, co-author of the book, "A Speck in the Sea: A Story of Survival and Rescue," pursued the two male deer as they wildly twisted.

"They were kinda tossing each other around and finally let him get closer," Erb said.

Sosinski didn’t give up the effort to cut them free, which lasted more than five minutes. His perseverance paid off and he eventually cut free the bucks, which are frequent visitors to the neighborhoods of Montauk.

While the actions of the man in the video was courageous and compassionate, he did put himself and the animal in a position of being injured, a DEC spokesman said.