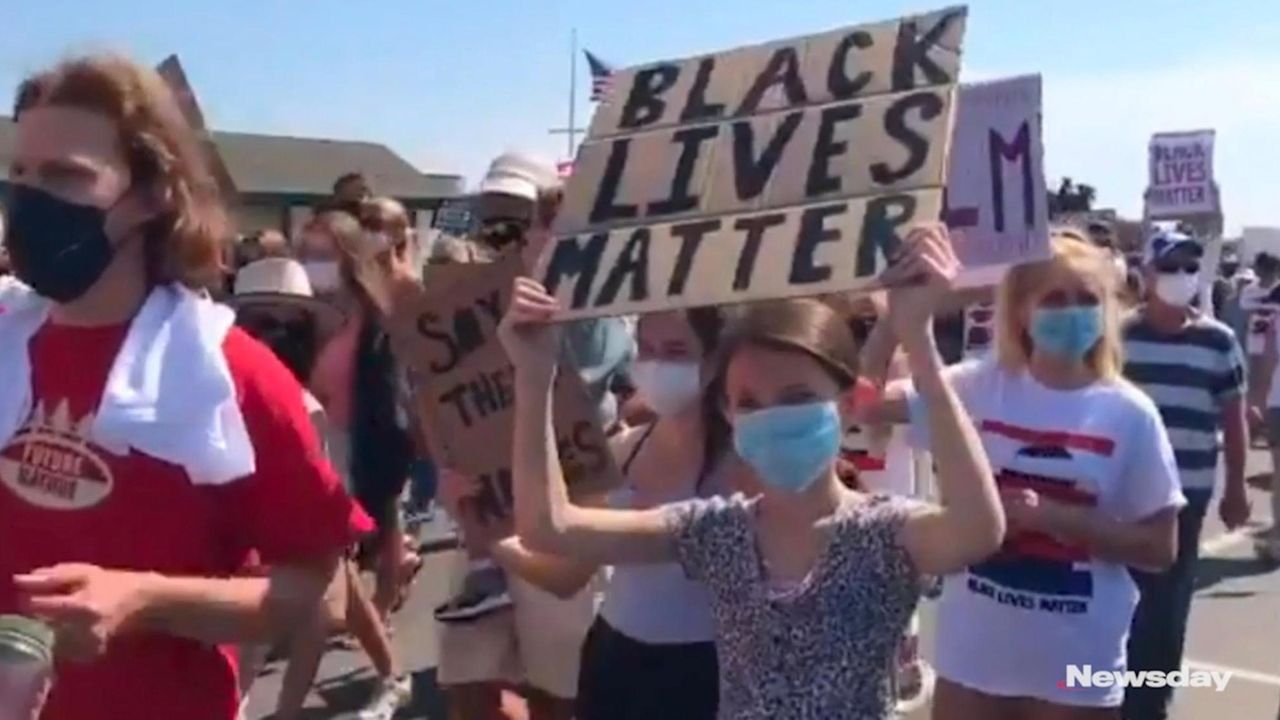 Several hundred protesters marched down Main Street and crowded the village green in Montauk Monday to continue the momentum of Black Lives Matter demonstrations that have swept the nation, calling out racism nationally and in the Hamptons.

Protest organizer Tanish Lindsay, a Jamaican immigrant who lives in Montauk, said holding the third protest in Montauk was important because some business owners had objected to a march down Main Street, while some restaurants and stores have treated Black and Latino workers and customers differently than they do whites.

“I’ve worked here 10 years and they treat immigrants like they’re nobody,” Lindsay said before the march began. She said Black and Latino workers are typically underpaid and given lower-profile kitchen jobs in restaurants, while white workers typically get higher profile waitressing jobs.

As the march began around 3 p.m., she urged protesters to turn up the volume.

“We have to be loud walking all the way through Main Street because they fought this and we won,” she said of businesses that she said objected to the protest.

Hundreds of mostly white protesters chanted as they marched past dining vacationers in light summer wear, took a knee in the green while Lindsay chanted, “I can’t breathe,” and then stayed silent in honor of George Floyd, who died under the knee of a white police officer in Minneapolis.

Protester Bart Freundlich, who summers in Montauk, said he attended the protest and march “for the importance of walking the walk and finally opening my eyes to the fact that there’s systemic racism, even in this place that I value so much.”

T.J. Josephs, a worker at John’s Drive-In on Main Street, said she hopes the rally “really sends a message” locally and nationally about racism, even if she herself hasn’t seen evidence of it where she works. Her employer helped her make the Black Lives Matter sign she carried to the protest and encouraged her to attend, she said.

Travis Wilkins, a minister and middle school teacher who graduated from Bridgehampton schools and earned a doctorate, told the crowd and Montauk, “If our African American women are good enough to be your nannies during the summer, they’re good enough to be respected during the winter.” He told white attendees, “We’re not mad at you because you’re Caucasian … We’re mad at a system that has imprisoned us long enough.”

Willie Jenkins, a local community activist, told the crowd “We’ve got to break the system” that has allowed racism to continue from his childhood in Bridgehampton to Montauk today. “The American dream is for everybody.”

Anjae Street of Flanders said in places like the Hamptons “they want to cover up the racism, but it’s still here.” Still, she said it was “good to see people of so many different ages and races. Keep doing your thing. I’m proud of you all.”

“This is not the time to have your two and three Black friends,” said Kristina Newby of Riverhead, who encouraged the crowd to keep the momentum going and spread the word. “I want you to hit up your 200 or 300 friends on Facebook and educate them … White privilege is 100% real. I’m not saying you should end it. I’m saying I want some too.”