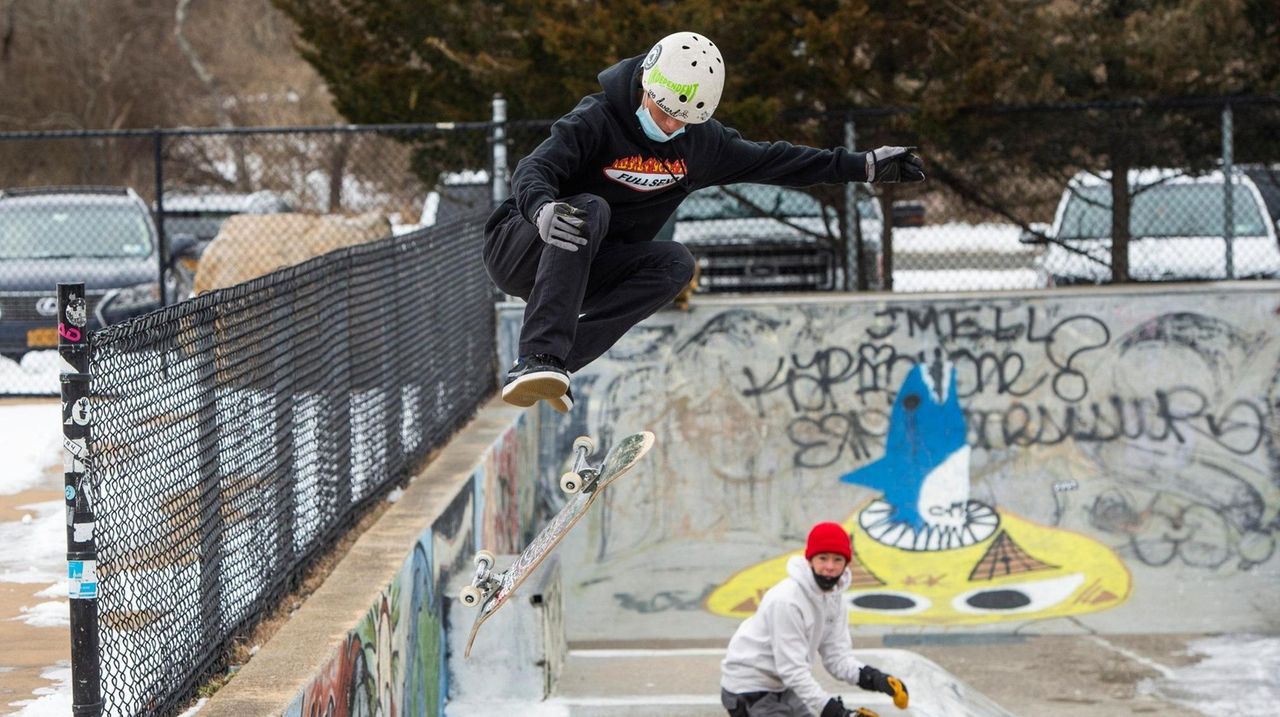 John Britton is one of the parents organizing a movement to upgrade the Montauk Skate Park. He said his family used the skate park more this year while looking for outdoor activities during the pandemic. Credit: Gordon Grant

A group of Montauk residents is raising money to overhaul the local skate park, an amenity they say goes hand in hand with the hamlet’s surfer culture and offers a pandemic-safe outlet for kids.

The South Essex Street park was designed in 1999 by Andy Kessler — a skateboarding pioneer and member of the Soul Artists of Zoo York network who died in Montauk in 2009 following an allergic reaction to a wasp sting — and built with $170,000 in East Hampton Town funds.

Now a public-private partnership between the town and residents is working to remodel the aging park and build a section for beginners.

John Britton, who owns a home in Montauk, is one of the parents organizing the movement. He said his family began to use the skate park more this year while looking for outdoor activities during the pandemic.

"If the surf is no good you are going to usually find these kids at the Montauk skate park," he told the town board during a Feb. 2 work session.

But the current park, he said, is outdated, deteriorating and is not friendly for new skaters.

The group wants to move forward with schematic plans from the Joplin, Missouri-based Pivot Custom, which has designed skate parks all over the country and as far away as Dubai. It would add a beginner section over a former basketball court that had previously been cleared out for park expansion.

The town is considering paying roughly $300,000 for the project with an additional $300,000 raised by the coalition through donations, town Councilman David Lys said. Other proposed features include a shade shelter and lighting. If the group exceeds that goal, it could build an even better park, Britton said.

"It lets them stay away from their devices for a little bit. It’s something that my kids and their friends can enjoy," Lys said, adding that the project has the approval of his 14-year-old daughter. "She said ‘this is neat, Dad. You’re almost cool.’ "

The sport, he noted, has become more mainstream in recent years and is set to make its Olympic debut this summer in Tokyo.

The other four town board members expressed support for the project during the work session.

"If there is a silver lining in this pandemic it’s that people have really been hungry for safe outdoor activities," Supervisor Peter Van Scoyoc said. "It [the skate park] really is an idea whose time has finally come and coalesced."

The town has already received a $50,000 donation for the project, and Britton said other residents have indicated they would also be willing to donate.

The renovated park could be completed by July, Lys said. It would be open to all, as it is now, and could be another economic driver in the resort town.

"We have an incredible enthusiastic community, we have awesome plans and we have something that can be a tremendous asset," Britton said in an interview. "We’re hopeful we can build a real gem that can last."