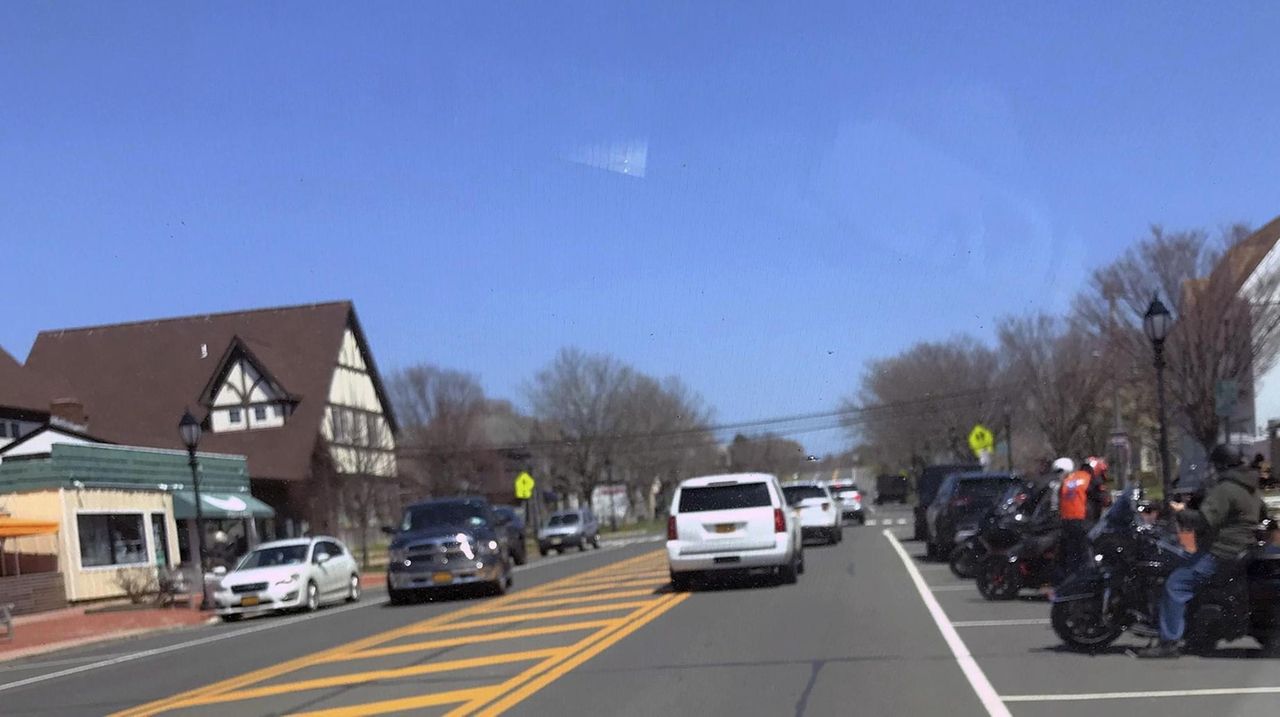 A line of cars is seen in downtown Montauk on April 19. Residents have complained of an influx of day-trippers. Credit: Cynthia Ibrahim

East Hampton Town police are asking people to limit their day trips out east until the state begins reopening, as the town works to control weekend visitors flocking to Montauk.

The town issued 177 code and parking violations on April 25, two days after it announced it would begin enforcing summer beach parking regulations about a month earlier than usual due to the COVID-19 pandemic.

The town cannot regulate movement to the area without a statewide travel restriction, but it can control parking, said East Hampton Town Police Chief Michael Sarlo.

“Closing the beaches completely is almost impossible with well over 100 access points and so many private residences with beachfront property,” Sarlo wrote in an email. “We are asking day-trippers to please limit trips out east until the state government begins phase one openings.”

Montauk residents reported frustration at seeing traffic backed up along Montauk Highway, motorcycle riders congregating and garbage piling up on the beaches on sunny weekend days. Those interviewed suspected the influx is from sightseers rather than second-home owners or East Hampton Town residents.

“It’s the day-trippers that are congregating on the corner with red Solo cups in the middle of the epidemic thinking this is OK,” said Montauk resident Cynthia Ibrahim, a real estate agent. “It [Montauk] shouldn’t be a tourist attraction right now because nothing is supposed to be open.”

Van Scoyoc in an interview said he didn’t want to discourage all travel out east, but asked visitors to wear masks and abide by social distancing guidelines.

“I don’t think I want to say don’t come out east at all,” he said. “People need to get out and get a lot of fresh air.”

Last month he declined to sign a letter to Gov. Andrew M. Cuomo signed by 10 supervisors and mayors asking for restrictions on nonessential travel from New York City to the East End. The order was not implemented.

Montauk resident and former town board candidate Bonnie Brady said she thought Van Scoyoc should have signed on to the request, noting the nearest hospital is 26 miles from Montauk and the closest drive-thru testing site is an hour’s drive in Riverhead. She pointed to restrictions in the Florida Keys, which is closed to tourists during the pandemic.

“If we don’t do everything we can, we risk becoming a hot spot,” she said.

Montauk has one of the lowest infection rates on Long Island, with just 13 confirmed coronavirus cases, or 3 per 1,000 people, according to Suffolk County data as of Tuesday.

Looking to the summer season, when East Hampton’s population swells from its about 23,000 year-round residents to 50,000-70,000 from May to early September, Van Scoyoc is part of a Suffolk County working group developing regional guidelines for beaches.

“Maybe we put out a grid on a beach,” to keep an acceptable distance, he said. “I think it’s unlikely we’ll have a typical summer, by any means.”

Bayport man stole pride flags in Sayville, police say
Hempstead joins five other towns in voting to opt out of marijuana sales
Uniondale to honor memory of Jo-Jo Wright with '10 for #10 Tip-Off'
Ex-Mangano deputy sentenced to 18 months in prison
Air power museum marks Pearl Harbor day with dropping of roses from vintage plane
Medical experts: NYC's attack against COVID-19 can become model
Didn’t find what you were looking for?